The foreign and defense ministers of Japan and India agreed Thursday to seek to hold their first joint fighter jet drill at an early date as they are struggling to maintain a free and open Indo-Pacific amid China's growing maritime assertiveness in the region.

In a joint statement issued after the "two-plus-two" security talks in Tokyo, the four ministers underscored that the Indo-Pacific should be "based on the rule of law and free from coercion," expressing opposition to any unilateral attempts to alter the status quo in the region. 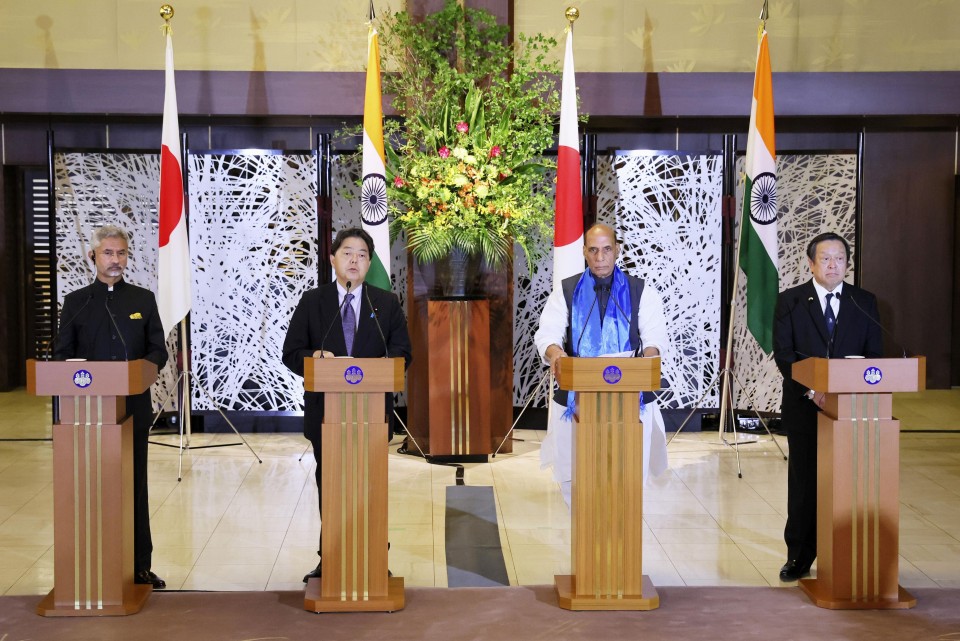 The joint fighter jet drill was initially scheduled for 2020 but has been postponed due to the coronavirus pandemic.

The meeting comes ahead of a possible summit between Japanese Prime Minister Fumio Kishida and his Indian counterpart Narendra Modi later this month. Modi is planning to visit Tokyo to attend the state funeral for former Prime Minister Shinzo Abe on Sept. 27, Japanese officials said earlier.

The two-plus-two meeting is the second after Japan and India launched the dialogue in New Delhi in November 2019.

Japan will "examine all options" to strengthen its defense, such as acquiring controversial "counterstrike capabilities," and substantially increase its defense spending, the statement also said, adding that India expressed its support for Japan's efforts.

Kishida's Liberal Democratic Party has set the goal of doubling Japan's defense spending to 2 percent or more of gross domestic product in the next five years.

Together with the United States, Japan has been pushing forward the vision of a free and open Indo-Pacific as a counter to China's increasing military and economic influence in the area.

China, which views Taiwan as a renegade province to be reunified with the mainland, by force if necessary, opposes official contacts between the island and the United States.

Pelosi's visit prompted China to conduct large-scale military drills near Taiwan, including firing ballistic missiles, some of which fell into Japan's exclusive economic zone in the East China Sea.

China's recent military acts are a "serious issue" for the security of Japan and safety of its people and could also gravely affect international peace and stability, Hayashi said in a joint press appearance.

Jaishankar underscored that unwavering collaboration between India and Japan on foreign policy as well as in addressing security challenges has been further reinforced.

Relations between India and China have remained strained since a military conflict in June 2020 in a Himalayan border area, where 20 Indian soldiers were killed. It was the first deadly clash between their troops since 1975.

Meanwhile, India, as well as 13 other nations including China, took part in Russia's large-scale military exercise held in its Far East region this month.

Traditionally friendly with Russia, India is widely seen as using its closeness to Moscow as leverage in dealing with a border conflict with China. India has refrained from joining U.S.-led international sanctions on Russia for its war on Ukraine.

Hamada and Singh separately held defense ministerial talks earlier in the day where they agreed to oppose any unilateral attempts to alter the status quo in the Indo-Pacific, the Japanese Defense Ministry said, apparently in reference to China's assertiveness in the region. 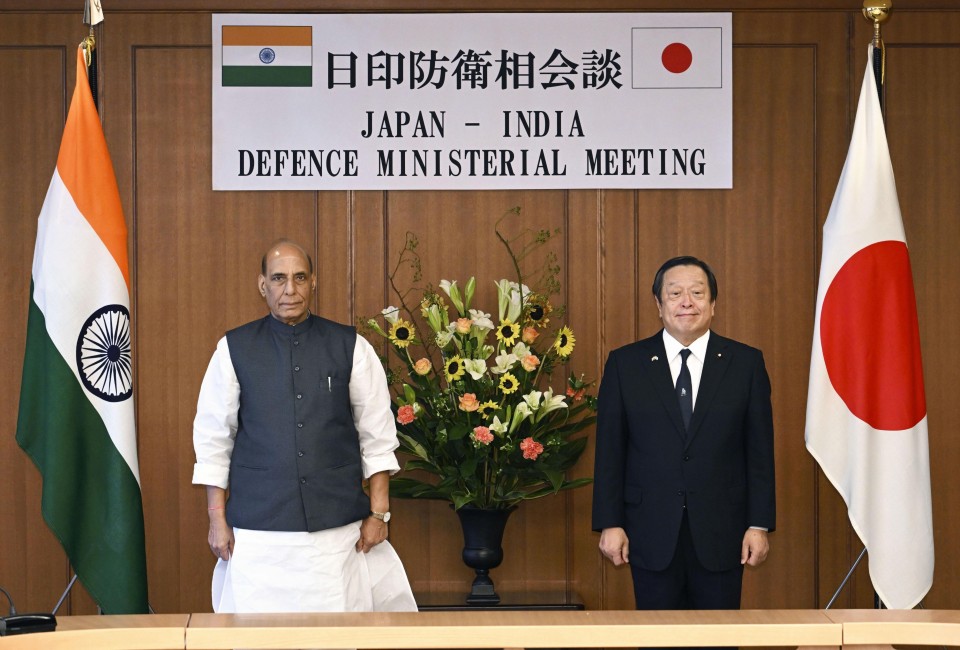 Japan's Defense Minister Yasukazu Hamada (R) and his Indian counterpart Rajnath Singh pose for a photo before their bilateral meeting at the Japanese Defense Ministry in Tokyo on Sept. 8, 2022. (Pool photo) (Kyodo) ==Kyodo