In a press statement issued Thursday, Kim Yo Jong, the younger sister and close aide of North Korean leader Kim Jong Un, rejected Yoon's proposal from earlier this week as an "impracticable one to create mulberry fields in the dark blue ocean."

Kim Yo Jong, who is vice department director of the Central Committee of the Workers' Party of Korea, indicated she believes Yoon's "bold plan" is a replica of a similar proposal made by former South Korean President Lee Myung Bak more than 10 years ago, which was "only to be forsaken as a product of the confrontation" between the two Koreas. 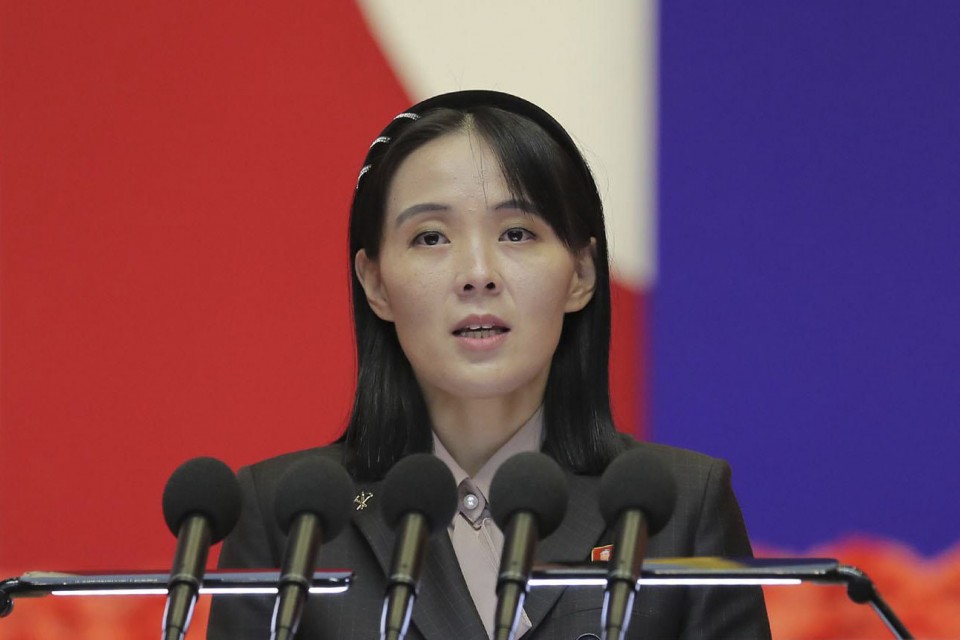 She said the idea to barter economic cooperation for "our honor, nukes, is the great dream," adding, "No one barters its destiny for corn cake."

In his first Liberation Day speech Monday since taking office in May, Yoon vowed to offer economic support including a large-scale food program and infrastructure projects to North Korea if the nuclear-armed country embarks on a substantive process of denuclearization.

Kim Yo Jong said the assumption the North will make efforts toward denuclearization is "a wrong prerequisite" and Yoon is "childish" to make such a proposal.

Later in the day, South Korean Foreign Minister Park Jin held phone talks with U.S. Secretary of State Antony Blinken, according to the Foreign Ministry of the Asian nation.

The two top diplomats exchanged views on the security situation on the Korean Peninsula and agreed that Seoul and Washington will strengthen cooperation to deter provocations by the North and lead it to return to dialogue, the ministry said.

In marked contrast to his predecessor Moon Jae In, Yoon is known for taking a hard-line stance on North Korea. Pyongyang has repeatedly criticized him by name, saying in the latest statement, "We don't like Yoon Suk Yeol himself" and making it clear that "We will not sit face to face with him."

With regards to the firing of two cruise missiles toward the Yellow Sea on Wednesday, Kim Yo Jong said it was a "weapon test" and that Seoul wrongly announced they had been fired from the Onchon area of South Pyongan Province in the central region of the country.

Kim Yo Jong said the missiles had been fired from Anju city in the same province and asked why "those always talking about the pursuit (of) surveillance and full preparedness" under the cooperation between South Korea and the United States "could not indicate the launching time and place properly."

The missile launch was detected a day after U.S. and South Korean troops began a preliminary drill ahead of their annual exercises from next Monday.

The two Koreas remain technically in a state of war as the 1950-1953 Korean War -- in which U.S.-led U.N. forces fought alongside the South against the North supported by China and the Soviet Union -- ended in a cease-fire, not a peace treaty.