Atomic bomb survivor Setsuko Thurlow on Monday expressed her disappointment over Japanese Prime Minister Fumio Kishida's speech at the U.N. headquarters in which he called for a world free of nuclear weapons, saying it was largely "rhetoric" and avoided a fundamental question Japan faces in advancing toward the goal.

While hailing Kishida for becoming the first Japanese leader to attend the Nuclear Non-Proliferation Treaty review conference, Thurlow, a 90-year-old peace advocate living in Canada, said, "He covered all the nice things...but what I thought was lacking in his speech was real, honest debate of Japan's role to play." 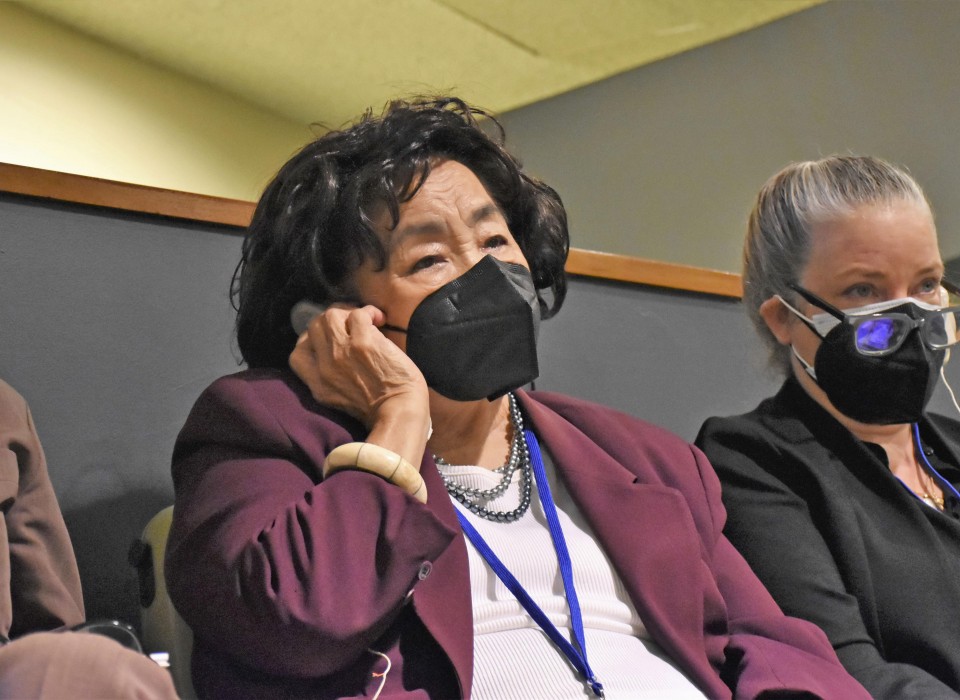 Setsuko Thurlow, a 90-year-old survivor of the 1945 U.S. atomic bombing of Hiroshima who is now living in Canada, listens to a speech given by Japanese Prime Minister Fumio Kishida during a review conference of the Treaty on the Non-Proliferation of Nuclear Weapons at the U.N. headquarters in New York on Aug. 1, 2022. (Kyodo) ==Kyodo

"He said he wants a world free of nuclear weapons, but how can we expect that as long as Japan is in alignment with the United States?" she asked, referring to the fact that Japan relies on U.S. nuclear deterrence for protection.

"There is a contradiction, and he doesn't want to talk about such basic thing," she added.

During his 10-minute speech in New York, Kishida did not mention at all a U.N. treaty banning nuclear weapons, which entered into force in January last year and is widely supported by atomic bomb survivors who have been left frustrated with the lack of progress in nuclear disarmament. No nuclear powers are signatories of the treaty. 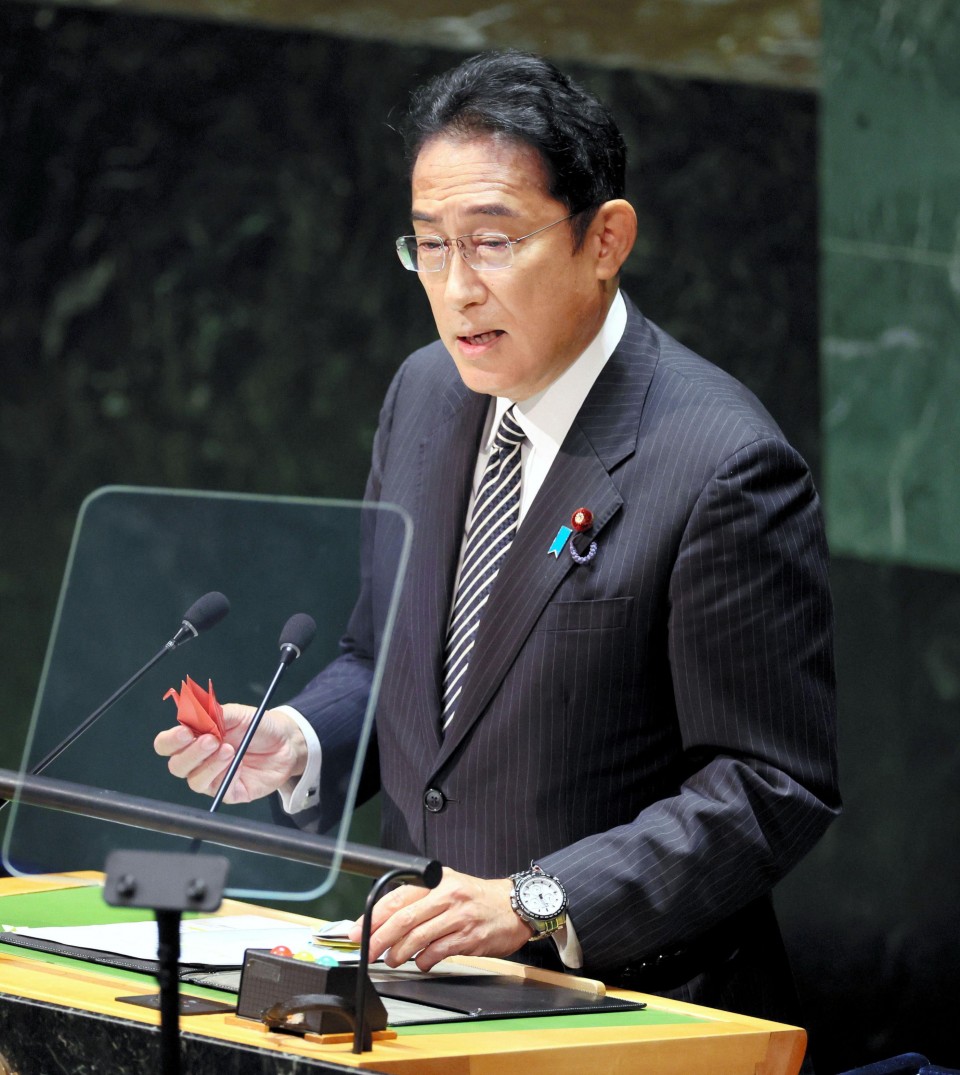 Japanese Prime Minister Fumio Kishida gives a speech during a review conference of the Treaty on the Non-Proliferation of Nuclear Weapons at the U.N. headquarters in New York on Aug. 1, 2022. (Pool photo) (Kyodo) ==Kyodo

Instead, Kishida's remarks focused on the importance of taking "every realistic measure" toward a world without nuclear weapons "step by step" and noted that the starting point is to maintain and strengthen the NPT, the world's most widely ratified agreement on nuclear arms controls.

He also said Japan will contribute $10 million to the United Nations to help young people learn about the horrors of atomic bombs through visits to Japan, the only country to have suffered nuclear attacks in war.

It is not common for heads of government to attend the NPT review conference, which is basically held every five years. But Kishida, elected from a constituency in Hiroshima, which was devastated by a U.S. atomic bombing in World War II, sees his vision of a nuclear weapons-free world as a top priority.

Thurlow survived the bombing of Hiroshima at age 13. She has been actively involved in anti-nuclear activities, offering her personal account in English.

A distant relative of Kishida, Thurlow says the death of her 4-year-old nephew, who was "transformed into a charred, blackened and swollen child" in the nuclear attack, is one of the reasons driving her campaigning. Her older sister, the nephew's mother, also died.

Thurlow was among those who accepted the Nobel Peace Prize in 2017 on behalf of the International Campaign to Abolish Nuclear Weapons.