Leaders from Japan and African nations on Sunday said the ongoing Russian war in Ukraine has caused a food crisis on the fast-growing continent, without referring to Moscow by name.

"We underscore with deep concern the negative socio-economic impact of this (Ukraine) crisis, which has created food insecurity in Africa in the challenging context" of the post-COVID era, the leaders said in the Tunis Declaration issued following the Tokyo International Conference on African Development held in the Tunisian capital. 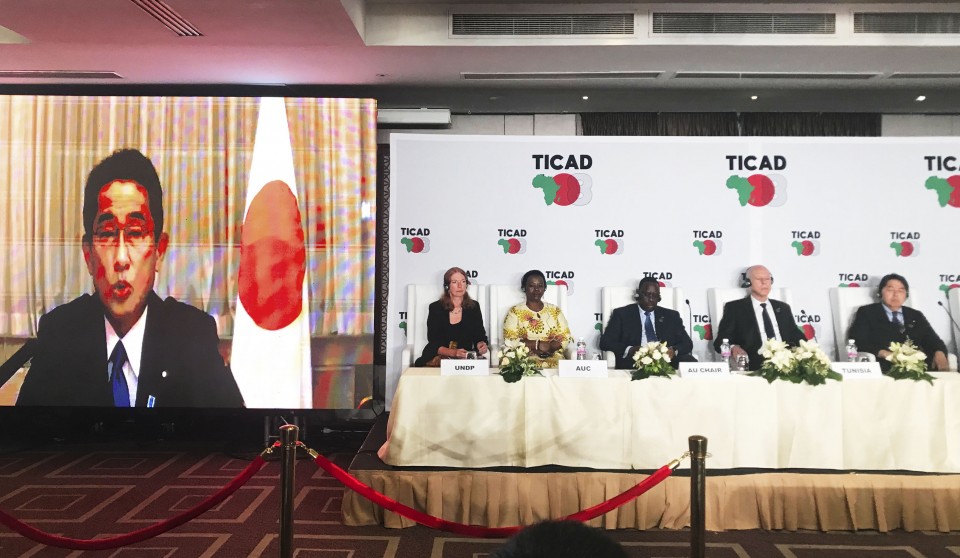 The leaders also affirmed the importance of "sound development finance adhering to international rules and standards" to spur sustainable growth in Africa, where China is increasing its clout through investment and development aid.

The food crisis is being felt acutely in some African and Middle Eastern nations that are highly dependent on grain from Ukraine, a major producer.

Besides the Ukraine war, the African economy is still being hit by the coronavirus pandemic.

"Dealing with challenges, such as a food crisis triggered by Russia's aggression against Ukraine and unfair and opaque development financing, has become an urgent task," Japanese Prime Minister Fumio Kishida told a joint press conference after wrapping up the meeting.

Kishida joined the event virtually due to being infected with COVID-19. Foreign Minister Yoshimasa Hayashi represented Japan in the Tunis meeting.

On Saturday, Kishida said Japan will inject $30 billion over the next three years into African development, including $300 million in co-financing with the African Development Bank, to boost food production.

Japan and other Group of Seven countries -- Britain, Canada, France, Germany, Italy and the United States, plus the European Union -- have condemned Russia for destroying Ukraine's agricultural infrastructure and imposing a blockade of its Black Sea ports that has prevented shipments of Ukrainian crops.

Russia, for its part, has blamed the food shortages on Western economic sanctions over its invasion of Ukraine. 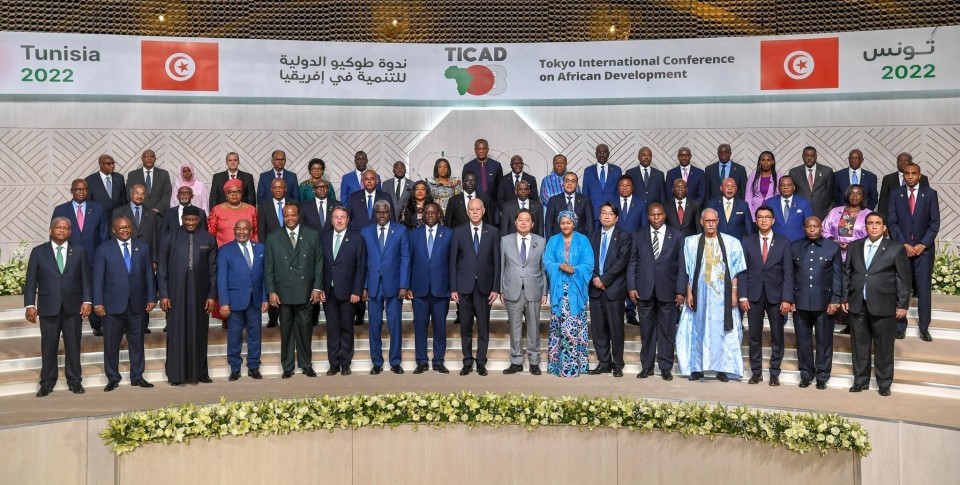 Participants pose for a family photo during the Eighth Tokyo International Conference on African Development in Tunis, Tunisia on Aug. 27, 2022. (TUNISIAN PRESIDENCY/HANDOUT/Anadolu Agency/Getty/Kyodo)

The G-7 members are concerned some African nations are accepting Russia's claim and even calling for an easing of sanctions, apparently reflecting Moscow's influence over them through assistance in the development of natural resources and exports of arms and food.

China has been criticized for using a "debt trap" policy in which it leverages debt to gain concessions from borrowing nations, such as long-term leases of port facilities and other infrastructure in strategically important areas.

In the declaration, the leaders urged major creditor countries and private lenders to adopt and follow fair and open lending practices, although they stopped short of directly referring to China.

The declaration also said that, among other things, "quality infrastructure investment" is fundamental for "leading to sustainable economic transformation" of Africa.

The outcome document "compiled at this occasion will serve as a guidepost for future Japan-Africa relations and sustainable growth in post-COVID-19 Africa," Kishida said in a video message at the closing session.

"Japan will help realize sustainable development together with Africa with these approaches, which are unique to Japan, focusing on people," he added.

The leaders also vowed to step up their cooperation in reforming the U.N. Security Council, seen as dysfunctional following its permanent member Russia's war against Ukraine, saying the reform should be addressed "in a comprehensive, transparent and balanced manner."

While Africa has no permanent seats on the council, the leaders of African nations and Japan, which has long aimed to become a permanent council member, maintained it is "the historical injustice" to be redressed and reaffirmed their support for "full African representation" on the council.

Co-hosted by Japan, the United Nations, the World Bank, the U.N. Development Program and the African Union Commission, TICAD has been held every three years since its fifth session in 2013. Before that, it had taken place every five years following its launch in 1993.

Kishida said Japan will host the next TICAD leaders meeting in 2025 without mentioning the name of any city.

Japan PM vows $30 bil. over next 3 years for Africa as China, Russia loom