Japanese Prime Minister Fumio Kishida reshuffled his Cabinet on Wednesday, giving key posts to familiar faces with proven records, in a bid to reverse flagging public support and steer clear of dubious ties with a religious group spotlighted by the killing of former premier Shinzo Abe.

Kishida hopes the renewal will pave the way for a long-term, stable administration to tackle what he termed "the biggest challenges of the postwar era," citing resurging COVID-19, the Ukraine crisis and its economic fallout like inflation, and rising U.S.-China tensions over Taiwan.

He also unveiled a new lineup of Liberal Democratic Party executives at a time of intensifying public scrutiny over the party's relationship with the Unification Church, after Abe was shot dead on July 8, two days before a national election, by a man who believed the former premier had links with the religious group. 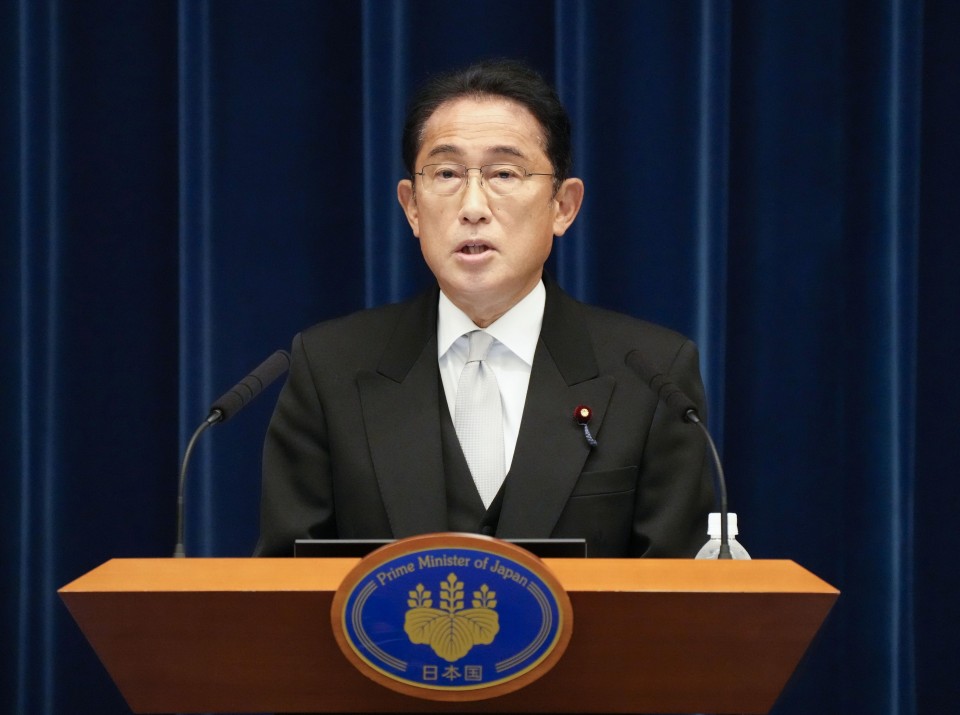 Calling his new team "a Cabinet that pushes through policies," Kishida said he picked "experienced and capable" members to swiftly deliver results in times of crisis at home and abroad.

"I asked all ministers, as part of their responsibility as politicians, to check and strictly review any links to the group in question to avoid public doubts and appointed only those who have agreed to do so," he said in a nationally televised press conference.

In the reshuffle, Yasukazu Hamada, who was defense minister between 2008 and 2009, returned to the job, as Japan seeks to bolster the capability of its forces through increased spending in a rapidly changing security environment. A review of national security strategy and key defense policy documents is planned this year.

Hamada replaced Nobuo Kishi, the younger brother of Abe. It is apparently due to health reasons, but Kishi admitted he had received help from the Unification Church in past elections.

Former economic revitalization minister Yasutoshi Nishimura will serve as industry minister, taking over from Koichi Hagiuda, who moves to the pivotal post of LDP policy chief.

Kishida's personnel choices reflect his desire to retain the support of conservative members who belong to the largest LDP faction formerly led by Abe, a necessity to shore up his support as party leader and therefore prime minister. Both Hagiuda and Nishimura are members of the faction.

The controversy over the church, now formally known as the Family Federation for World Peace and Unification, began after Abe's assailant Tetsuya Yamagami told investigators that his mother's donations to the religious group had ruined their family's fortunes and he held a grudge against it.

During the press conference, Kishida dismissed the view that LDP policies were "unfairly" impacted by the church, saying that no organizational relationship exists.

At least five ministers in the new Cabinet acknowledged their past links with the church on Wednesday, including by participating in events or paying fees. Economic revitalization minister Daishiro Yamagiwa, who retained the portfolio, and Katsunobu Kato, who became health minister again, are among the five.

Followers of the church have been convicted in Japan in connection with money illegally obtained from people through the use of threats, including the citing of "ancestral karma."

Both Takaichi and Kono challenged Kishida in last year's LDP presidential race. The roster of LDP executives has been closely watched for any indications of change in Kishida's approach to intraparty power dynamics. 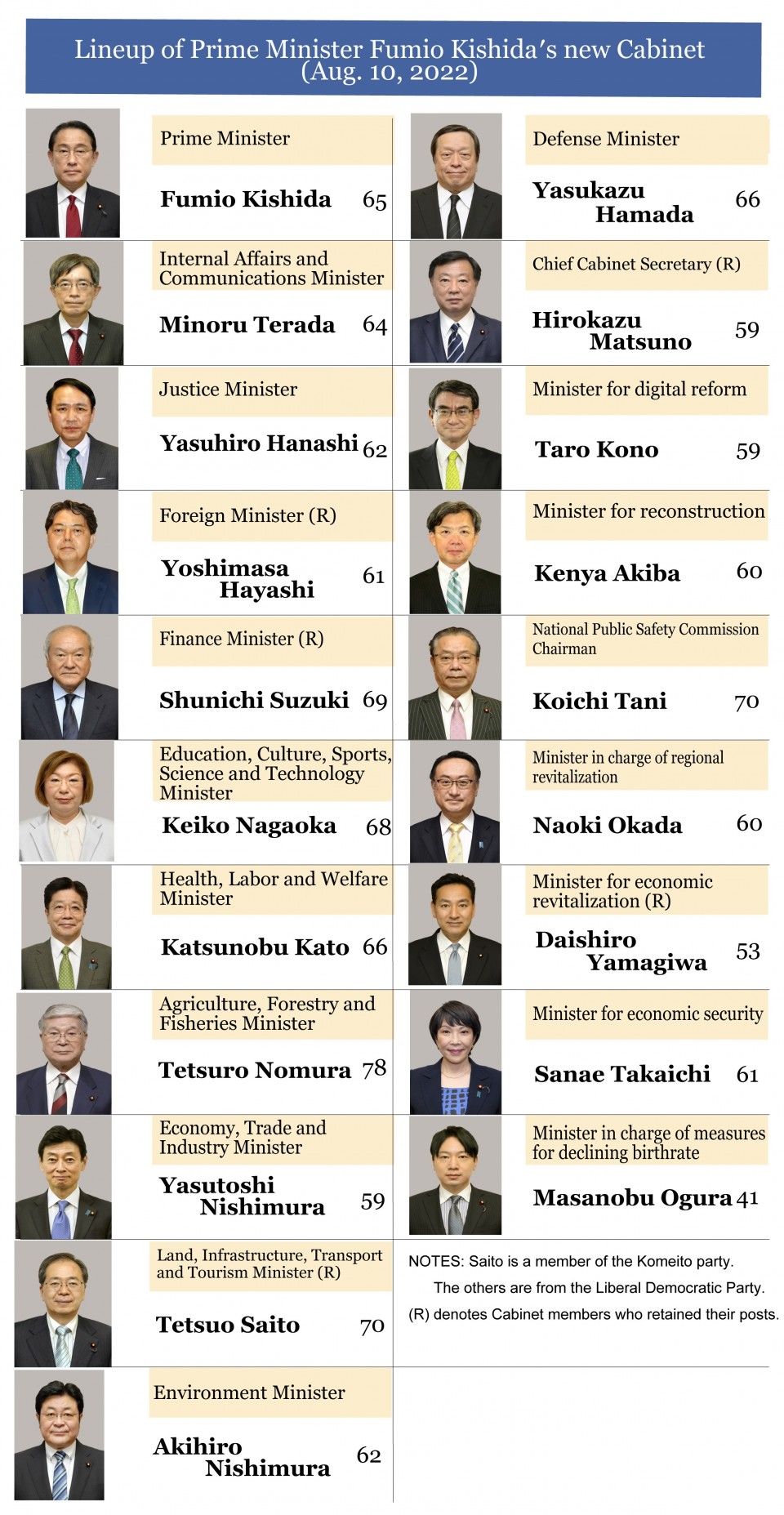 Hiroshi Moriyama, who backed former Prime Minister Yoshihide Suga with LDP heavyweight Toshihiro Nikai, will be in charge of the election strategy committee.

The selection of Moriyama, known for his coordination skills gained as Diet affairs chief under Abe and Suga, means Kishida is also taking heed of members who have retreated to the sidelines and distanced themselves from the current government, in an apparent effort to keep the party united.

Abe's death muted what could have been a celebratory mood after a sweeping victory by the ruling coalition in the House of Councillors election. Public support has been slipping over the Unification Church controversy and the legitimacy of holding a state-funded funeral for Abe on Sept. 27.

In a Kyodo News poll released in late July, the approval rating for Kishida's Cabinet dropped to 51.0 percent, the lowest since he took office, from a record high of 63.2 percent just weeks ago.

He had relatively strong public support with his emphasis on the COVID-19 response and firm stand on Russia's invasion of Ukraine.

On Wednesday, Kishida stressed the need for vigilance against COVID-19 but added Japan will further relax strict border controls implemented as a precautionary step, bringing them on par with other major economies. 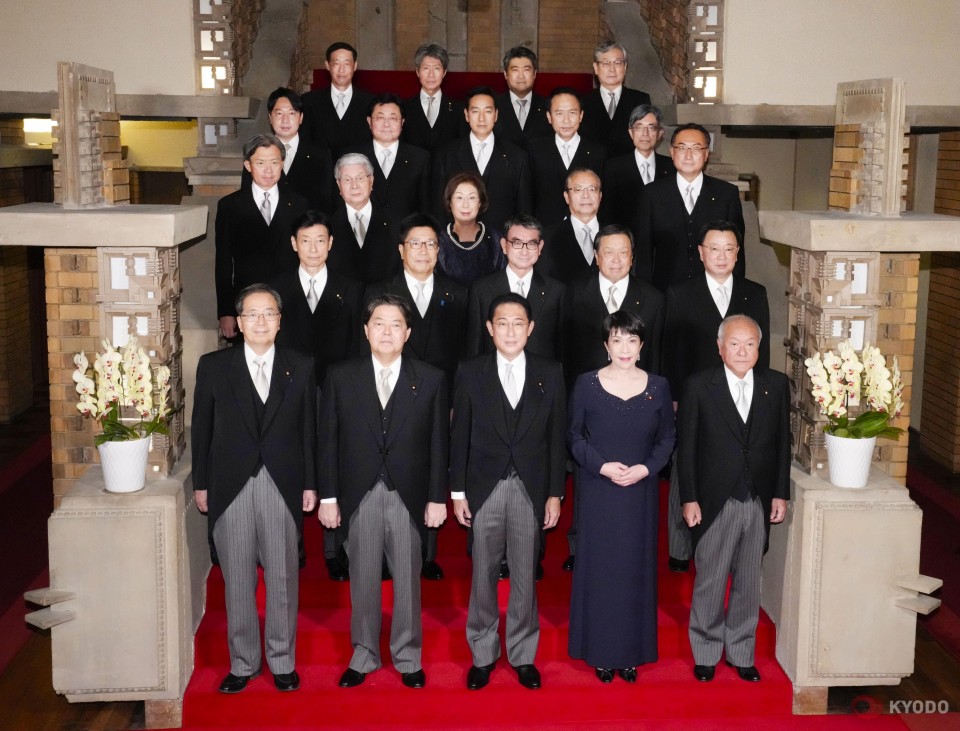