Groups working to persuade individuals to leave the Unification Church say they face a daunting task as "they must beat God."

The fatal shooting of former Japanese Prime Minister Shinzo Abe during a campaign stump speech last month in the western city of Nara has led to a surge in people reaching out to groups that help members of the church and their families, with one group reporting Thursday a 12-fold rise in consultations from June to July. 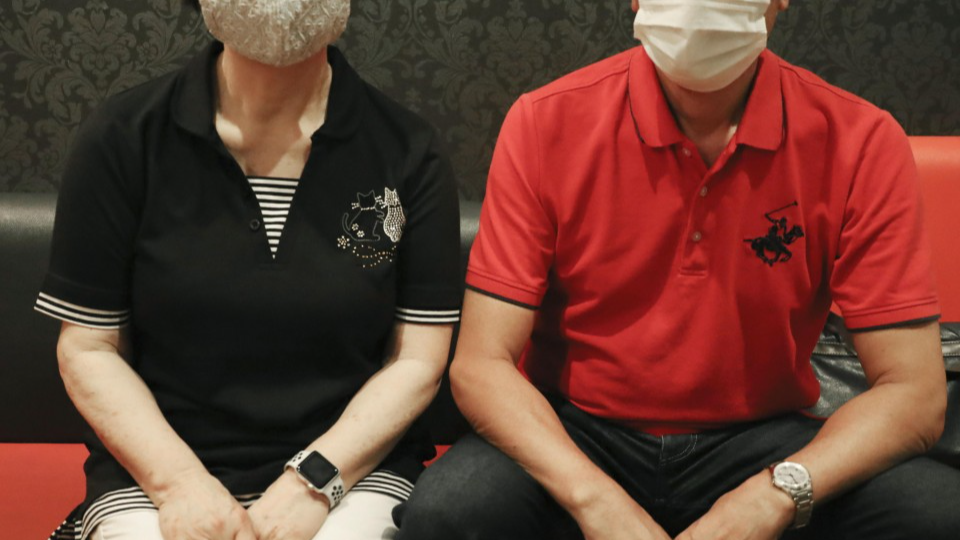 A couple who receive consultations as part of a group helping victims of the Unification Church are pictured on July 30, 2022, on the condition their faces not be exposed. (Kyodo)

Among those providing support is Akira, 64, and his 67-year-old wife Kyoko, a former member of the church. The couple spoke to Kyodo News under pseudonyms about how he convinced her to leave the church.

The Unification Church, now formally known as the Family Federation for World Peace and Unification, was founded in 1954 in South Korea by a staunch anti-communist. It has come under renewed attention since investigative sources revealed that the assailant claims to have shot Abe because of his alleged links to the church.

The accused, Tetsuya Yamagami, 41, has also said his mother's membership of the church and large donations to it bankrupted the family. Known for its mass weddings, the church had previously drawn scrutiny over so-called spiritual sales, in which people are talked into buying jars and other items for exorbitant prices.

For Kyoko and Akira, their relationship with the church began in July 1997, when another mother at their son's school invited her to a study session to learn about their family tree. The seminar, held in an apartment, was attended by about 30 people.

Apart from ancestry, Kyoko also enjoyed speaking to the woman about other matters, including her relationship with her husband, worries about raising her son and her relatives.

For Kyoko, it felt like she had found a safe space, somewhere she could talk and be listened to when bringing up things she could not discuss at home.

As she attended more meetings, Kyoko started to ask those present about the meaning of events in her life. Each time she received an explanation of what her experiences signified, she came away with a sense of satisfaction.

She started going to the meetings every week. When it was revealed to her in November of that year that the group was actually part of the Unification Church she was not deterred.

It was around this time that Akira realized his wife had become a follower. He confronted her after finding a book produced by the church in their home.

"I couldn't understand his concern and we fought daily," Kyoko said.

Akira eventually decided to change tack and start trying to find ways to empathize with his wife. Attending gatherings for people who had left the church and their families changed his thinking.

Although Kyoko clung to her belief that leaving the church would result in damnation, he did not give up. She finally left the church in June 1999, about a year and half after Akira first started trying to persuade her to get out.

But what changed her mind was not anything he said. It was someone who had left the church.

"This person who had experienced the same thing said, 'I'm glad I left.' I thought for the first time that, even though I had always been scared of the idea, maybe it would be all right if I did quit," Kyoko said.

Starting in 2003, Akira joined up with people he had come to know through activities aimed at helping followers to leave the church and established a group to support the families of members.

"The church's way of doing things is to pretend to care so it can use followers' troubles against them. To bring back a significant person in your life, the most important thing is to not dismiss them and to believe in yourself," he said.