Myanmar's military chief Senior Gen. Min Aung Hlaing said Monday that some points of a consensus reached between the junta and the Association of Southeast Asian Nations to end the country's ongoing crisis will be implemented this year.

In his televised speech broadcast on state TV, Min Aung Hlaing was referring to the consensus he reached with ASEAN leaders in April last year that calls for an immediate stop to violence in Myanmar and the dispatch of an ASEAN envoy to the country to meet with all parties concerned. 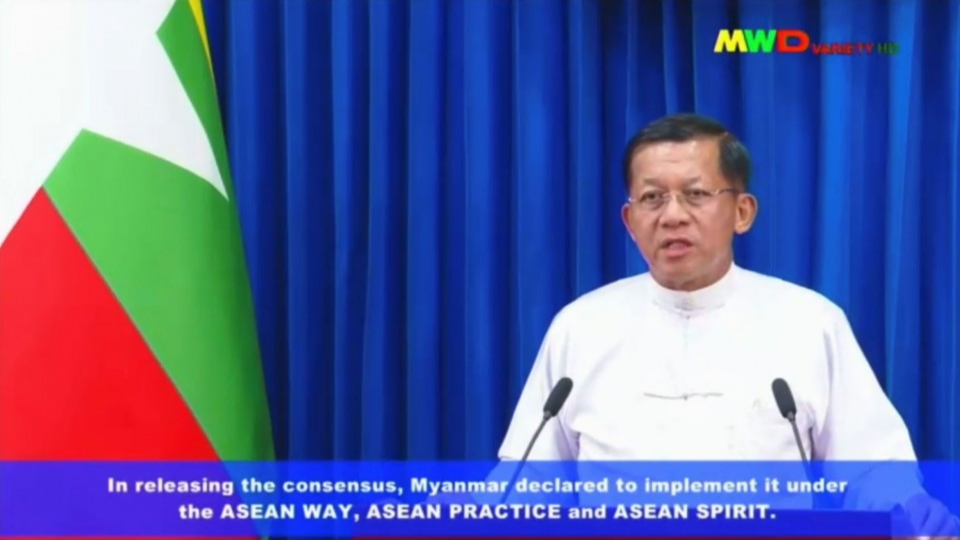 Min Aung Hlaing said the military -- which toppled the democratically elected government of Aung San Suu Kyi in a coup in February 2021 -- was unable to implement the so-called five-point consensus last year due to "lack of stability" because of the impact of the coronavirus pandemic and "internal riots and violence."

"This year, as all situations are in progress, the most possible points of the five ASEAN consensus will be implemented under the ASEAN frameworks," he said.

Although the ASEAN special envoy, Cambodia's Deputy Prime Minister and Foreign Minister Prak Sokhonn, visited Myanmar twice, in March and June this year, the essential points of the consensus remain unfulfilled as conflicts and violence continue across the country.

Prak Sokhonn was not allowed to meet with Suu Kyi and other detained elected leaders.

Min Aung Hlaing's speech followed the official announcement Sunday on the extension of the state of emergency for a further six months in a "unanimous" decision by the country's National Defense and Security Council, in which he is the most influential member.

He told the council that the move is necessary to continue dealing with stability and peace and working on holding general elections to return the country to the multiparty democratic system.

Min Aung Hlaing saw opposition groups as obstacles to implementing the junta's political and security objectives, claiming that "internal and external terrorists" and their conspirators are committed to the "utter devastation" of the country.

More than 2,100 civilians have been killed since last year's coup, according to the Assistance Association for Political Prisoners, a Thailand-based human rights organization.