A drop in public support has come as a jolt to Prime Minister Fumio Kishida, who has yet to deliver on his promise to create a new form of capitalism.

Economic growth is a prerequisite for Kishida's goal to spread more wealth among the public. But accelerating inflation in Japan, blamed on Russia's war in Ukraine, has already begun to hit households while wages are not rising much, threatening to cloud the outlook for the world's third-largest economy. 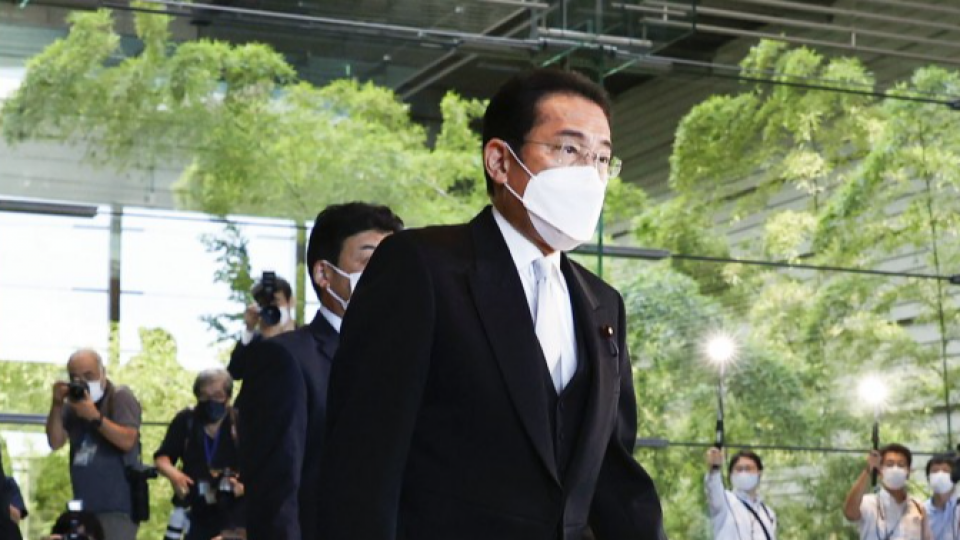 Japanese Prime Minister Fumio Kishida is pictured at his office in Tokyo on Aug. 10, 2022, ahead of an attestation ceremony at the Imperial Palace for members of his reshuffled Cabinet. (Kyodo) ==Kyodo

Analysts say how well he guides policy to support the economy -- and whether he can connect with ordinary people by fleshing out his vision for a new capitalism -- will be critical in regaining public support.

"The current situation for households is the opposite of 'distribution' because real income is falling," said Saisuke Sakai, senior economist at Mizuho Research & Technologies. "If Mr. Kishida cannot satisfy conservative quarters with a revision to the Constitution in the short run, he has to do well on economic issues."

Kishida has pledged to accelerate parliamentary debate on amending the U.S.-drafted Constitution following his sweeping election victory in the House of Councillors election on July 10, shortly after the shocking assassination of Shinzo Abe, a former prime minister who was a vocal advocate for the amendment. But actually achieving a first-ever revision of the supreme law is still seen as an unachievable goal for the ruling Liberal Democratic Party.

After going ahead with his first personnel changes since the election, Kishida said now is the time to put words into action.

"We are entering a full-implementation phase for policy items that we have promised to tackle," Kishida said at a press conference following the Cabinet reshuffle Wednesday.

"We will use all policy tools" to ensure a sustainable economy beyond COVID-19 and a new global order after the post-Cold War era, he said.

Kishida's government has taken a spate of measures to soften the blow to consumers from inflation, including providing subsidies to oil wholesalers to lower retail gasoline and kerosene prices.

Without such steps, core consumer inflation would top 3 percent in the October-December quarter, according to an estimate by Mizuho Research & Technologies, in a nation used to decades of deflation.

A rapidly falling yen, which boosts import costs for resource-scarce Japan, will remain a headache. The Japanese currency is expected by the research institute to depreciate further beyond 140 to the U.S. dollar as the U.S. Federal Reserve raises interest rates while the Bank of Japan stays resolutely focused on monetary easing.

The dollar traded in the 132 yen range on Thursday.

"Cutting reliance on imports and raising wages are necessary but take time. Fiscal spending is necessary and monetary easing will continue as Mr. Kishida is expected to retain key features of 'Abenomics,'" Sakai said, referring to Abe's program aimed at boosting the economy.

Kishida has backed monetary easing by the central bank to attain its 2 percent inflation target, even though its commitment has weakened the yen, which recently hit its lowest level in over two decades. The core consumer price index, excluding volatile fresh food items, jumped 2.2 percent in June from a year earlier, though the BOJ maintains the current inflation will be temporary and its 2 percent target should be attained stably.

Kishida must now decide who should succeed BOJ Governor Haruhiko Kuroda, whose term ends next April, and his choice will attract scrutiny for any hints of a departure from Abenomics, which centered on monetary easing under the current governor.

The premier's firm grip on power after the recent election win, his support of monetary easing to attain the 2 percent inflation goal, and the retention of Finance Minister Shunichi Suzuki should smooth the way for the selection by the year's end of a candidate, according to Yoshimasa Maruyama, chief economist at SMBC Nikko Securities Inc.

With the killing of Abe still reverberating within the LDP, Kishida gave some of the top economy-related posts to LDP lawmakers who had close ties to the former premier.

The LDP is pushing for the controversial restart of nuclear power plants, taken offline after the 2011 Fukushima accident.

Sanae Takaichi, a former LDP policy chief who shared Abe's views on security and defense issues and competed against Kishida in the party presidential race in 2021, was named economic security minister amid concerns about China's theft of technologies and perceived pursuit of hegemony.

"The lineup gives the impression that Mr. Kishida is on the defensive. But it is a well-calibrated one that is designed to make no enemies," said Hitoshi Komiya, a professor of Japanese political history at Aoyama Gakuin University.

"He is giving key allies of Mr. Abe who could challenge Mr. Kishida in the future a chance to prove themselves in critical yet sensitive areas such as nuclear power and energy policy," Komiya said.

"If they do well, that would be a plus for the Cabinet. But it also means that if they fail to meet expectations, this could hurt their political career. But he can still keep some distance because they are not from his own faction," he added.

Kishida decided to entrust Taro Kono, an outspoken former vaccination minister and another rival in the presidential race, with the job of digital transformation, described by the prime minister as a "crucial investment area" in his new capitalism push.

"Mr. Kishida may have a good chance of staying on as prime minister for a long time. But he needs concrete outcomes for his new capitalism, which remains vague," Komiya said.