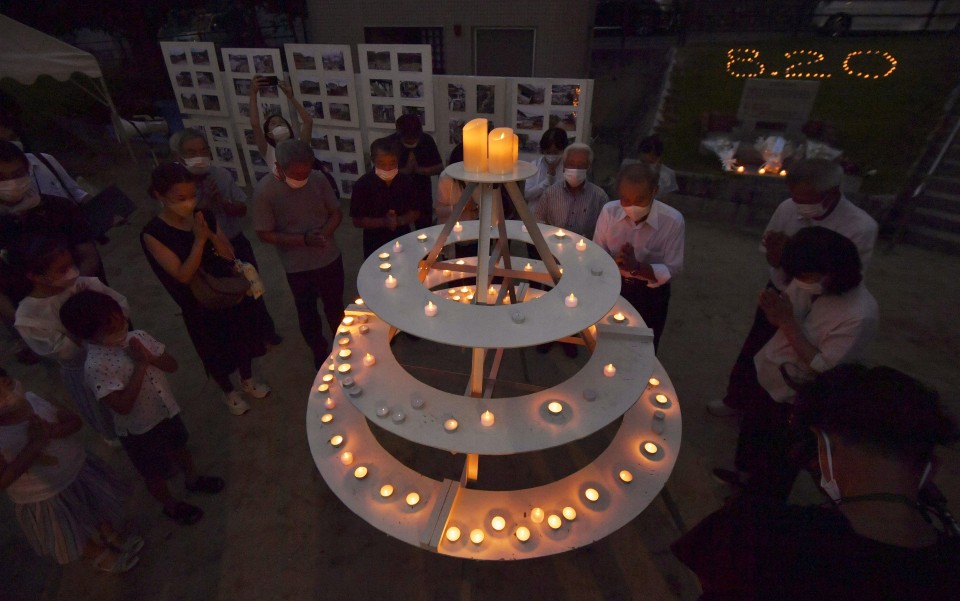 Candles are lit at a park in the western Japan city of Hiroshima near the site of 2014 mudslides that claimed 77 lives, on Aug. 20, 2022, the eighth anniversary of the tragedy. (Kyodo) ==Kyodo

TOKYO - Japanese Prime Minister Fumio Kishida tested positive Sunday for the novel coronavirus, a day before he was to resume his duties, but his symptoms are mild, the premier's office said.

Kishida, who is now resting at his official residence, started experiencing mild symptoms such as a slight fever and cough from Saturday night, according to the office.

TOKYO - A teenage girl arrested over a random attack with a knife in Tokyo's Shibuya district has said she stabbed two people she came across because she "wanted to get the death penalty," the police said Sunday.

The girl, who was arrested Saturday on the spot on suspicion of attempted murder, has been identified as a 15-year-old junior high school student from Toda, Saitama Prefecture, north of Tokyo. Her name has been withheld because she is a minor.

TOKYO - The first in-person ministerial meeting of the Indo-Pacific Economic Framework involving 14 countries including Japan and the United States is expected to be held early next month in Los Angeles, Japanese government sources said Sunday.

Japan's Economy, Trade and Industry Minister Yasutoshi Nishimura will be among the attendees at the two-day meeting from Sept. 8, as the delegates aim to push forward negotiations under the U.S.-led trade initiative launched in May, the sources said.

TOKYO - Coronavirus cases among children remain high amid a seventh wave of infections in Japan, with the weekly number of new cases for the age group hitting over 300,000 at one point, doubling the peak hit during the sixth wave earlier this year.

However, the vaccination rate for 5- to 11-year-olds has been sluggish, with the health ministry in response stepping up its calls for parents to actively consider inoculation from a public health perspective.

Baseball: Shohei Ohtani goes 2-for-4 as Angels lose to Tigers

DETROIT - Shohei Ohtani went 2-for-4 with a run scored Saturday for the Los Angeles Angels, who gave up an early lead in a 4-3 loss to the Detroit Tigers.

Batting leadoff as the designated hitter, Ohtani doubled before coming home on Luis Rengifo's single for a 1-0 lead in the first inning at Comerica Park.

Golf: Hideki Matsuyama 7 shots back at BMW C'ship after even-par 71

WILMINGTON, Delaware - Hideki Matsuyama will head into the final day of the BMW Championship seven strokes off the lead after shooting an even-par 71 in Saturday's penultimate round at Wilmington Country Club.

The 2021 Masters champion is 5-under for the tournament in a tie for 18th after dropping seven spots down the leaderboard.