Shohei Ohtani won his 10th game on Tuesday, making him the first player with double-digit home runs as a batter and wins as a pitcher in a single Major League Baseball season since Hall of Famer Babe Ruth in 1918.

Ohtani (10-7) struck out five over six innings for the Los Angeles Angels in their 5-1 victory over the Oakland Athletics at Oakland Coliseum.

The two-way superstar also hit his 25th home run, a solo in the top of the seventh, bringing his MLB career tally to 118 and surpassing Ichiro Suzuki for the second-most by a Japanese player. Only Hideki Matsui, with 175, has more.

Ohtani also surpassed 1,000 career strikeouts during the game, with his tally comprising 379 in MLB and 624 in Nippon Professional Baseball. 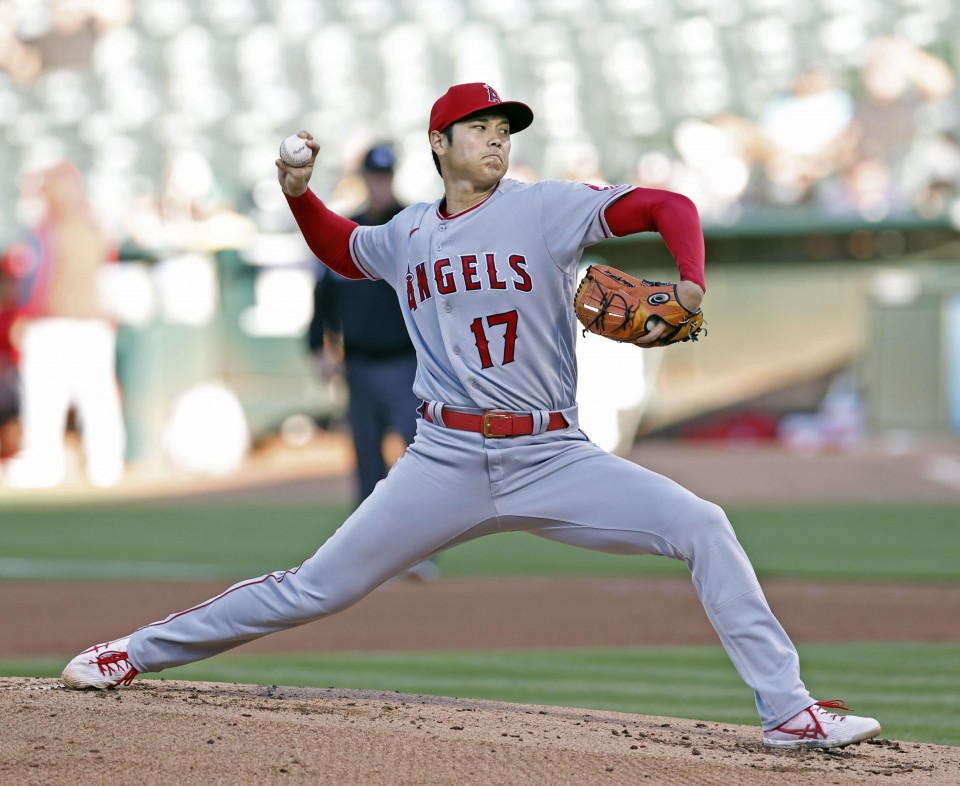 Shohei Ohtani of the Los Angeles Angels pitches in a baseball game against the Oakland Athletics on Aug. 9, 2022, at Oakland Coliseum in Oakland, California. (Kyodo) ==Kyodo

David Fletcher drove in the first run with his single off James Kaprielian (3-6) in the third. The Halos extended the lead to 4-0 in the fifth on Taylor Ward's three-run homer that scored Ohtani and Luis Rengifo.

Ohtani homered in the seventh, zeroing in on a slider from left-hander Sam Selman and launching it over right field. He finished 2-for-3 at the plate with an RBI, two runs scored and a walk.

"I've been thinking I'd get a chance (for the milestone) if I pitched well," Ohtani said. "(Ward) hit that home run and that got things going in the right direction. I am going to get some sleep as I want to do my best going into tomorrow's game."

Angels interim manager Phil Nevin lauded Ohtani after another "special" performance on the hill and at the plate.

"I feel like every time we're out there he does something special. Tonight is certainly another great milestone for him," said Nevin, who removed Ohtani from the lineup in the eighth to avoid aggravating a sore foot suffered when he saved a run with his fielding to end the third inning. 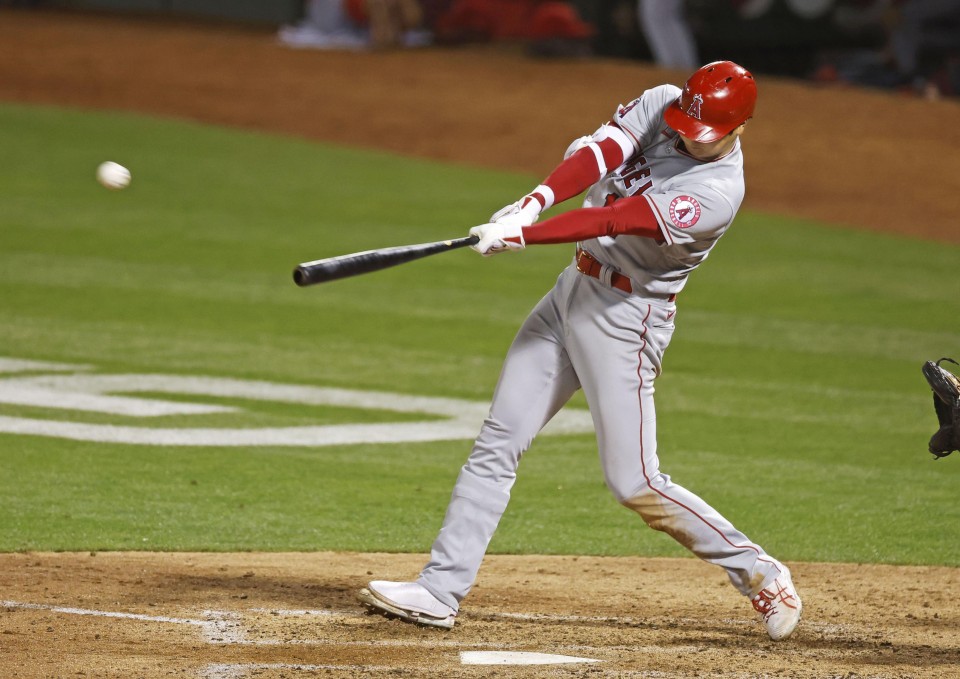 Shohei Ohtani of the Los Angeles Angels hits a home run in the seventh inning of a baseball game against the Oakland Athletics on Aug. 9, 2022, at Oakland Coliseum in Oakland, California. (Kyodo) ==Kyodo

"He took the one ball off the foot and it started to get a little sore, so we took him out...the precautionary X-rays were negative. It looks like he'll play tomorrow."

According to ESPN Stats & Info, Ohtani became the first American League pitcher to homer and throw six scoreless innings in the same game since Dave McNally for the Baltimore Orioles exactly 50 years ago to the day. The AL adopted the designated hitter the following season.

Ohtani previously logged double-digit wins and homers in 2014 and 2016 for the Nippon Ham Fighters in Japan's Pacific League. He was named the AL's 2021 Most Valuable Player after hitting 46 homers while going 9-2 on the mound.

In 1922, according to the seamheads.com Negro Leagues database, Bullet Rogan hit 15 home runs and won 15 games for the Negro League's Kansas City Monarchs, but MLB has yet to incorporate the league's statistics into its official records.

Ohtani's latest two-way milestone comes amid a turbulent season in which he was the subject of trade rumors after the Angels once again dropped out of playoff contention.

The team started the year strongly before eventually slumping to a franchise-worst 14-game losing streak during which skipper Joe Maddon was fired and replaced by Nevin.

Ohtani snapped the Angels' skid with a stunning two-way performance against the Boston Red Sox on June 9 in which he threw seven innings and hit a two-run homer.

Halos owner Arte Moreno reportedly turned down multiple trade offers for Ohtani ahead of the MLB trade deadline earlier this month, with the New York Yankees, Chicago White Sox and San Diego Padres said to be among the teams aiming to acquire the 28-year-old.

The reigning AL MVP fueled talk of his potential departure from Angel Stadium ahead of his second MLB All-Star Game appearance last month, telling reporters he was uncertain about his playing future.

Ohtani logged his ninth win of the season on July 13 against Houston before taking three straight losses that stranded him one win short of the landmark.

Elsewhere in the majors, Seiya Suzuki reached 1,000 career hits, adding 63 from his first MLB season with the Chicago Cubs to the 937 he logged for the Hiroshima Carp in Japan's Central League.

Suzuki went 3-for-5 with two runs scored and an RBI from his game-tying second-inning solo homer, his ninth bomb of the season, in the Cubs' 6-5 loss to the Washington Nationals.