Japanese Foreign Minister Yoshimasa Hayashi and his South Korean counterpart Park Jin agreed Thursday to speed up their consultations over a wartime labor issue that has soured bilateral ties, a Japanese official said.

In a meeting in Phnom Penh, the two ministers expressed readiness to improve bilateral relations following Yoon Suk Yeol's inauguration as South Korean president in May.

Hayashi and Park made no substantial progress in a dispute over compensation for the wartime labor issue in what became their second face-to-face dialogue in about half a month, the official suggested at a press briefing. 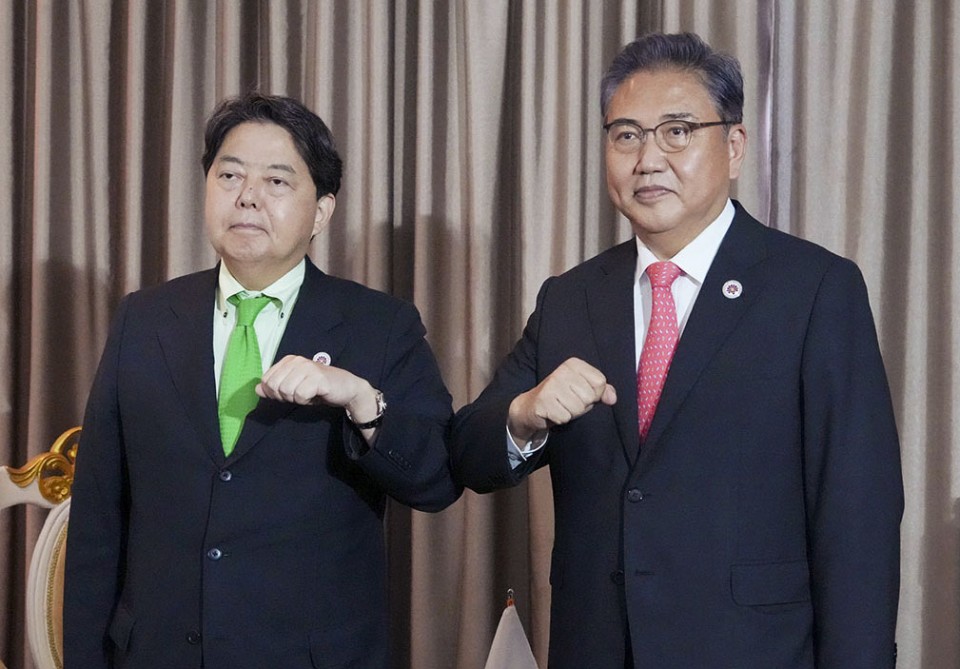 The meeting on the sidelines of Association of Southeast Asian Nations-related foreign ministerial gatherings came as South Korea's Supreme Court is expected to issue a ruling on the envisioned liquidation of assets in South Korea seized from two Japanese firms.

Following South Korean court orders in 2018 to compensate South Korean plaintiffs for their unpaid labor during Japan's 1910-1945 colonial rule of the Korean Peninsula, the assets of Nippon Steel Corp. and Mitsubishi Heavy Industries Ltd. have been seized.

The companies did not comply with the orders as they heeded Tokyo's position that the issue of claims stemming from the colonial era was "completely and finally" settled under a bilateral accord signed in 1965.

During their previous talks in Tokyo in mid-July, the first formal sit-down meeting since Park took office following Yoon's inauguration, the two ministers agreed to seek an "early settlement" of the labor issue.

In Thursday's talks, Hayashi reiterated Tokyo's warning that there will be "serious consequences" for the bilateral relationship if the South Korean top court moves forward with the liquidation procedure, according to the official.

Hayashi also conveyed Japan's regret over a recent military drill by South Korea focused on defending the disputed Takeshima islets in the Sea of Japan, the official said.

The drill is carried out about twice a year. The latest one was held for the first time since Yoon's inauguration.

The move has irritated some members of Prime Minister Fumio Kishida's Liberal Democratic Party, prompting them to demand that Hayashi not to have a meeting with Park in the Cambodian capital.

Yoon won the presidential election in March with a pledge to take a future-oriented approach toward the relationship with Tokyo, after it sank to its lowest point in years during the administration of Yoon's predecessor Moon Jae In.

Hayashi and Park also confirmed the need to step up their trilateral cooperation with the United States over North Korea's missile and nuclear weapons programs, sharing the view that Pyongyang's actions pose "a clear and serious challenge" to the international community, according to the official.