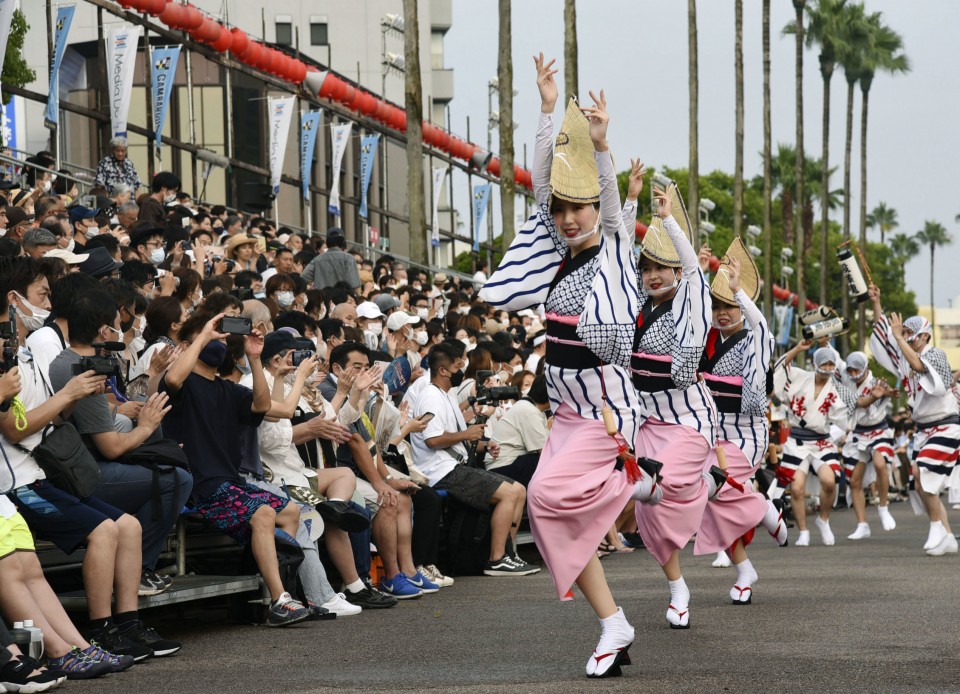 People dance on the final day of the four-day Awa dance festival in Tokushima, western Japan, on Aug. 15, 2022. (Kyodo) ==Kyodo

TOKYO - Japan rolled over 4 trillion yen ($30 billion) year to year in unspent funds in the budget for public works projects in both fiscal 2020 and 2021, government data showed Tuesday, at a time when the country's debt is ballooning.

The surplus is a result of spending not keeping up with the huge supplementary budget allocated for national resilience measures aimed at creating disaster-ready areas.

WASHINGTON/TOKYO - U.S. Secretary of Defense Lloyd Austin and new Japanese Defense Minister Yasukazu Hamada on Monday affirmed bilateral cooperation to respond to "any situation in the region," while criticizing China's firing of ballistic missiles that fell in waters near Japan during recent military exercises around Taiwan.

The United States and Japan also said that the two countries and South Korea recently engaged in a ballistic missile tracking exercise off the coast of Hawaii, underscoring their trilateral cooperation to tackle the North Korean nuclear threat.

TOKYO - Japan reported a record high number of weekly cases of ambulances struggling to find a hospital for patients in the week through Sunday, hitting a high for the third straight week, as the country grapples with a surge in COVID-19 infections, government data showed Tuesday.

The number of cases logged from Aug. 8 to 14 increased by 2 percent from the previous week to 6,747, of which 2,836 involved patients with respiratory difficulties, among other symptoms, and suspected of having COVID-19, according to the Fire and Disaster Management Agency.

TOKYO - Heavy rain is expected to fall again in parts of Japan through Thursday with coastal regions in the north and west at particular risk of landslides and flooding, the country's weather agency said.

The agency called for vigilance as a front extending from a low pressure system is forecast to move south toward areas facing the Sea of Japan, warning of highly unstable atmospheric conditions that could lead to lightning and tornados.

TOKYO - Solid profits at major Japanese companies in recent earnings reports are unlikely to translate into near-term wage hikes in broad sectors due to the risk of a global recession, dashing Prime Minister Fumio Kishida's hopes for higher pay to blunt the impact of rising prices.

The Japanese currency's drop to 24-year lows against the U.S. dollar has served as a major profit driver for some blue-chip companies, boosting profits earned overseas and inflating the value of assets held abroad in yen terms.

BEIJING - China said Tuesday it will impose sanctions including entry bans on Hsiao Bi-khim, Taiwan's de facto ambassador to the United States, and six others amid heightened cross-strait tensions, labeling them as "diehard Taiwan independence separatists," according to state-run media.

China has imposed a series of measures in response to U.S. House of Representatives Speaker Nancy Pelosi's visit to the self-ruled democratic island earlier this month.

The waste, mostly consisting of condensers and lighting ballasts, contains high concentrations of polychlorinated biphenyls that are harmful to humans and was disposed of in municipalities surrounding the plant before the 2011 nuclear disaster triggered by a massive earthquake and tsunami, according to the city of Muroran.

TOKYO - Almost an additional 20 million people could be pushed into extreme poverty this year due to Russia's war on Ukraine and its negative fallouts such as rising food prices, according to a recent U.N. report.

The document titled "The Sustainable Development Goals Report 2022" said the number of people who will live on less than $1.90 a day across the world in 2022 is estimated at 656.7 million, but "rising food prices and the broader impacts" of the Russian invasion of Ukraine could push the number even higher to 676.5 million.