About 150 Chinese children, their parents and others shared their love of dinosaurs in a recent exchange event held at the Japanese Embassy in Beijing, which featured the screening of a popular animation Doraemon movie and a scholar inspired by its main character.

After the participants saw the film "Nobita's Dinosaur 2006," Xing Lida, 39, an associate professor at the China University of Geosciences in Beijing, explained that his impression of the cartoon led him to name a footprint fossil of a new species of dinosaur discovered in China after the pivotal character. 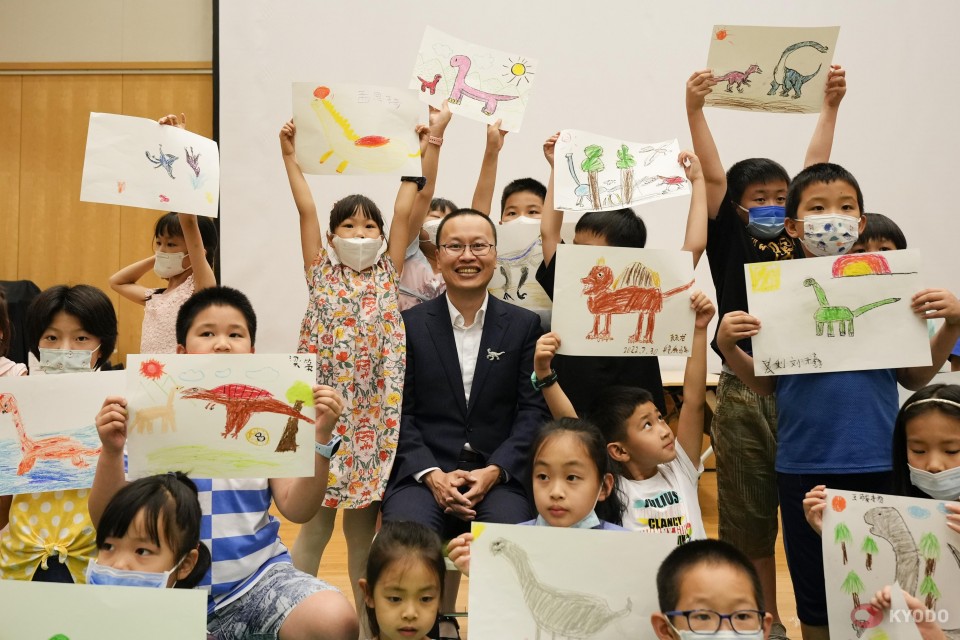 Xing Lida (C), an associate professor at the China University of Geosciences in Beijing, and children who participated in a Japan-China exchange event on dinosaurs pose for a group photo on July 30, 2022, at the Japanese Embassy in Beijing. (Kyodo)

The fossil found in July 2020 in China's southwestern province of Sichuan was named "Eubrontes nobitai." It has been recognized as being related to a new species of carnivorous dinosaur in the Cretaceous period.

"When I was little, I was influenced by such works as Doraemon and Jurassic Park," Xing said at the event held in late July, referring to the 1993 American movie that features many dinosaurs. "I named the footprints (after Nobita) to pay homage" to the Japanese animation film, he said. 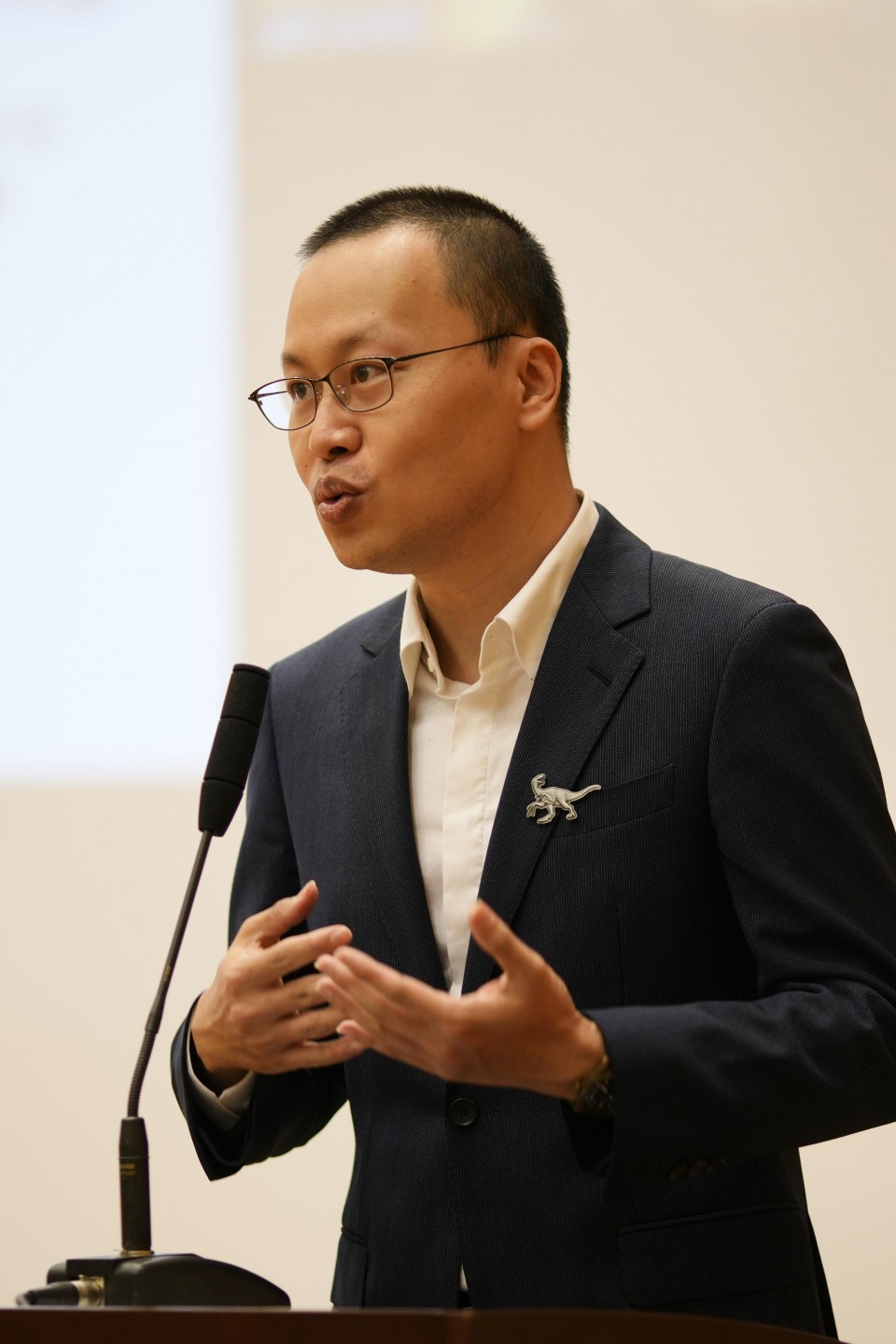 Xing Lida, an associate professor at the China University of Geosciences in Beijing, gives a lecture at a Japan-China exchange event on dinosaurs held at the Japanese Embassy in Beijing on July 30, 2022. (Kyodo)

While answering questions on dinosaurs posed by children, Xing said past discoveries by researchers have yet to resolve all the mysteries in paleontology and expressed hope that younger generations will help elucidate them.

Makoto Manabe, paleontologist and deputy head of Japan's National Museum of Nature and Science in Tokyo, who is a friend of Xing, joined the event online and said what are present-day China and Japan were contiguous when the new species of carnivorous dinosaur roamed the region.

"The dinosaur may have moved around from Sichuan to Japan at that time," he said.

Noting that many Chinese people visited a dinosaur exhibition in the Tokyo museum in 2019, Manabe said, "There are no national boundaries in people's love of dinosaurs. I hope children in China and Japan can connect with each other through that common feeling." 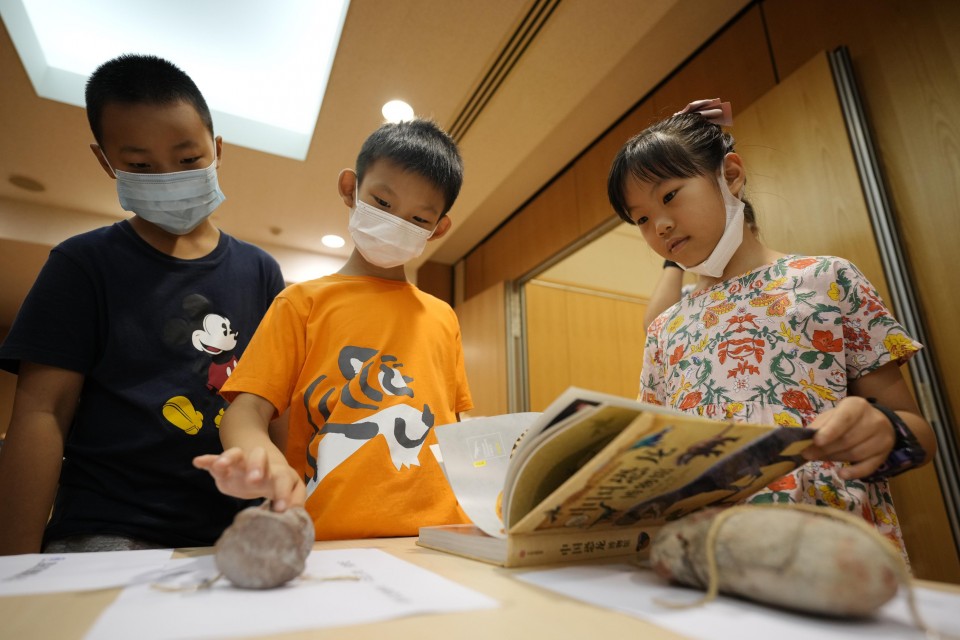 Children who joined a Japan-China exchange event on dinosaurs held at the Japanese Embassy in Beijing on July 30, 2022, look at a fossil and an illustrated book on dinosaurs. (Kyodo)

The 2006 film "Nobita's Dinosaur" is a remake of the movie of the same title released in 1980 and an adventure story in which Nobita tries to return an elasmosaurus to what is present-day Japan 100 million years ago using a time machine and other tools despite getting chased by dinosaur hunters.

T-Rex may have used lower jaw as tactile sensor: researchers