A government panel on Monday agreed on a record hike of 31 yen in the average minimum wage for fiscal 2022 to 961 yen ($7.28) an hour, ending prolonged consultations as Japan battles accelerating inflation amid Russia's war in Ukraine.

The figure marks a 3.3 percent increase from the 930 yen in fiscal 2021, keeping the momentum intact for raising the minimum wage for all workers, including part-timers and contract workers. 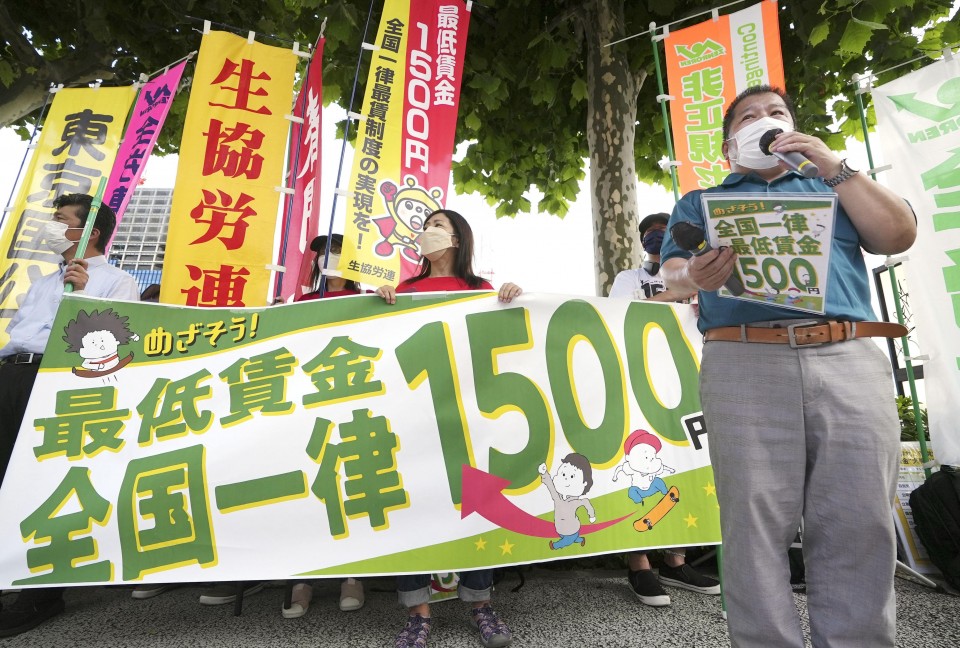 People rally in Tokyo on July 25, 2022, calling for a significant increase in the minimum wage in Japan. (Kyodo)

Labor and management representatives on the panel were on the same page over the need for higher pay, but haggled over how much the rise in inflation should be taken into account. It is rare for consultations by the panel to drag on until August.

The labor side called for a big increase in minimum pay as the cost of living has been rising while the management side, which is struggling with surging costs, has stressed the need for careful consideration.

The subcommittee of the labor ministry's Central Minimum Wages Council met Monday, after it failed to reach an agreement in late July.

Last year, the council proposed the minimum wage for all workers, including part-timers and contract workers, be raised by a record 28 yen to 930 yen.

Japan has seen wages grow but the pace of increase is seen as tepid. Meanwhile, Russia's war in Ukraine since late February has sent energy, raw material and food prices rising globally and core consumer inflation in Japan has topped 2 percent in recent months, pressuring households.

Based on a national target set by the council, local panels will decide on their minimum wage amounts, which will then be adopted around October. Employers who do not pay the minimum amount required by law will be fined.

Prime Minister Fumio Kishida is calling for more investment in people as he focuses on redistribution under his slogan of creating a "new capitalism." The government is aiming to increase the minimum wage across the nation to 1,000 yen as soon as possible.

"We'd like to see an increase that would be appropriate for the era of a new capitalism," Deputy Chief Cabinet Secretary Seiji Kihara told a press briefing.

The government will accelerate efforts to create an environment for companies to raise the minimum wage through such steps as assisting small and midsized companies in restructuring and boosting productivity, Kihara said.

Japan's minimum wage has been at low levels compared with other major economies, while there have also been gaps between urban and rural areas. In fiscal 2021, the highest minimum wage was 1,041 yen in Tokyo while the lowest was 820 yen in Kochi and Okinawa prefectures.

Weak wage growth is a major reason why the Bank of Japan sees the need to maintain its ultralow rate policy.

Japan prices predicted to rise 2.6% in FY 2022 amid Ukraine crisis