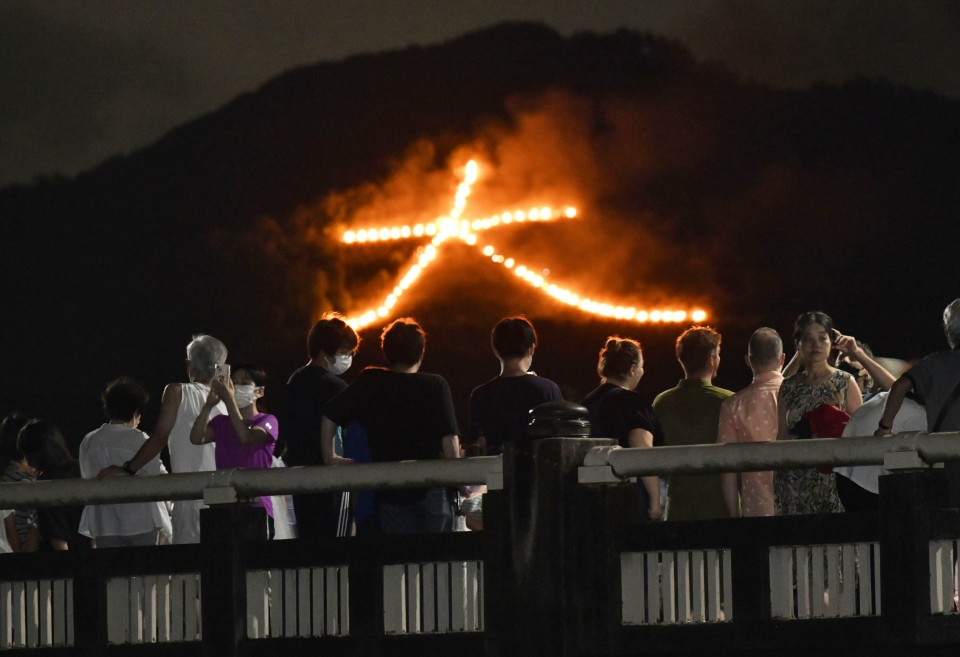 A huge bonfire forming the Chinese character for "large" is lit on a mountain during the Daimonji Festival in Kyoto on Aug. 16, 2022. (Kyodo) ==Kyodo

TOKYO - Business suit retailer Aoki Holdings Inc. paid 500 million yen ($3.7 million) for its sponsorship deal with the Tokyo Olympic and Paralympic organizing committee, less than half of what it cost other companies for similar arrangements, sources familiar with the matter said Thursday.

The revelations come a day after the arrests of Haruyuki Takahashi, a former Tokyo Olympic organizing committee executive who had significant influence in sports circles, and Hironori Aoki, a former chairman of the retailer, along with two others, on bribery allegations.

TOKYO - The Japanese government is preparing to extend by 180 days its financial aid program to Ukrainian evacuees who have no supporters such as family, friends or guarantors in the country, government sources said Thursday.

Continuation of the monetary support program, set to complete its first six months in late September, has been up for review as the Russian invasion of Ukraine that started Feb. 24 drags on and evacuees look set to be in Japan for a longer period.

TOKYO - Japanese opposition parties called Thursday for an extraordinary parliamentary session to be opened as soon as possible to examine the controversial links between members of Prime Minister Fumio Kishida's government and the Unification Church.

The move came as increasing numbers of ruling party lawmakers have been tied to the religious group, a major political issue in the wake of the assassination of former Prime Minister Shinzo Abe.

TOKYO - Pioneering Japanese fashion designer Hanae Mori, who gained international acclaim for her designs themed on "East meets West," died on Aug. 11 of old age at her Tokyo home, her office said. She was 96.

The fashion trailblazer, known for her butterfly motifs, became the first Japanese person to be listed as an official "haute couture" designer in Paris in 1977. Mori presented her collections for decades in Japan and abroad until retiring in 2004.

TOKYO - Japan's top national security adviser and his Chinese counterpart have agreed in talks that the countries will continue dialogue toward building constructive and stable bilateral ties, regardless of heightened tensions over Taiwan, their governments said Thursday.

During their about seven-hour meeting on Wednesday in the Chinese city of Tianjin, Takeo Akiba, secretary general of Japan's National Security Secretariat, made a protest to China's foreign policy chief Yang Jiechi about Beijing's recent large-scale drills near Taiwan, according to a Japanese government official.

WASHINGTON - The United States said Wednesday it has agreed to launch formal negotiations on trade facilitation and other economic issues with Taiwan, as part of efforts to enhance relations amid growing tensions with China over the self-ruled island.

The first round of talks will take place early in the fall, the Office of the U.S. Trade Representative said in a press release, adding that the goal is to come up with "high-standard commitments and meaningful outcomes covering" a total of 11 trade areas.

Nishimura is also scheduled to meet with officials of Tokyo Electric Power Company Holdings Inc., operator of the Fukushima Daiichi plant, and chiefs of local governments and the prefectural assembly, as his ministry faces multiple challenges such as a plan to discharge treated water containing trace amounts of tritium into the sea.