Prime Minister Fumio Kishida instructed officials Monday to draw up an additional package of steps by early September to alleviate the pain on consumers from rising import prices for wheat and energy amid Russia's war in Ukraine.

Kishida said the government will aim to maintain the price of imported wheat that it sells to millers at the current level and consider retaining subsidies to oil wholesalers to lower gasoline and kerosene prices.

To brace for increased electricity demand this winter, the prime minister reiterated a plan to make sure nine nuclear reactors that have passed safety screening are operational.

Most of the country's reactors remain offline amid safety concerns, more than a decade after the 2011 Fukushima nuclear power plant disaster triggered by a massive earthquake and tsunami. 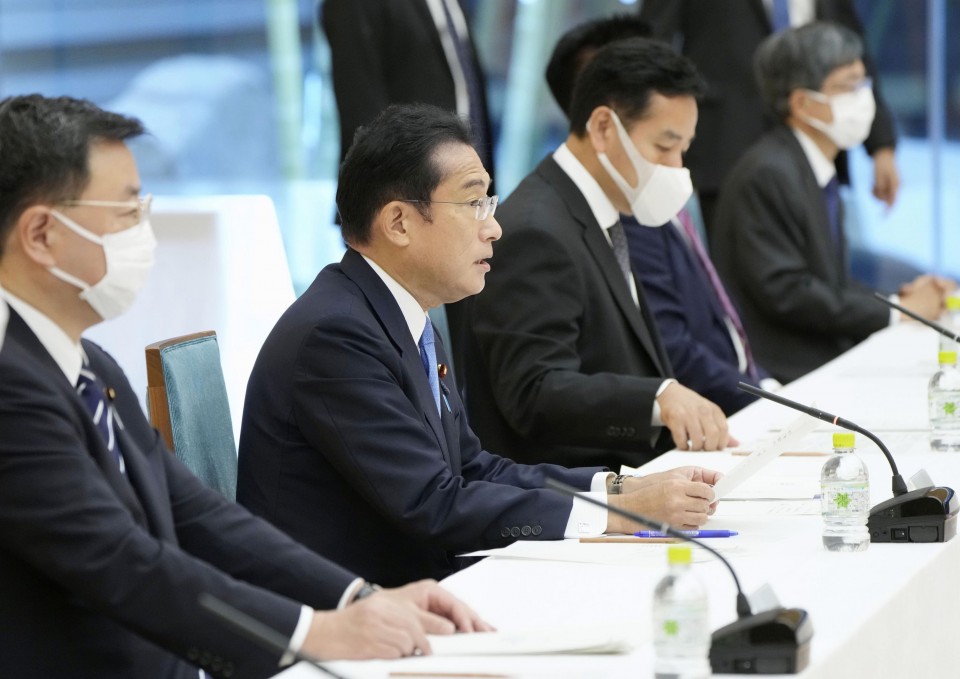 Japanese Prime Minister Fumio Kishida (2nd from L) speaks during a meeting of the government task force in charge of addressing wages, prices and people's livelihoods in Tokyo on Aug. 15, 2022. (Kyodo) ==Kyodo

"Surging prices for daily essentials, including bread and noodles, are serious," Kishida told a government meeting to discuss ways to deal with inflation.

He said the price of imported wheat, without any support, could jump by over 20 percent from October. "I ask Cabinet ministers to respond to this emergency situation with a maximum sense of crisis."

Imported wheat accounts for about 80 percent of domestic consumption and the government revises the price of imported wheat in April and October.

Higher energy, raw material and food prices are dealing a blow to import-reliant Japan, with a weak yen magnifying the impact. Companies have already been passing on higher costs to consumers but further hikes are expected, especially for food items.

Japan's gross domestic product returned to a pre-pandemic level in the April-June quarter, but accelerating inflation could put a damper on private consumption, a main driver of growth.

Tackling inflation is one of the top priorities for Kishida's recently revamped Cabinet as he seeks to shore up public support, which has been flagging partly due to concern about links between lawmakers of his Liberal Democratic Party and a controversial religious group.

The assassination of former Prime Minister Shinzo Abe last month put the spotlight on the Unification Church after the gunman was quoted by investigators as saying that his family was ruined after his mother made huge donations to the church and he believed Abe was linked to the group.

The church is famous for its mass weddings. Its "spiritual sales," in which people are talked into buying jars and other items for exorbitant prices, have become a social problem in the past.

A recent Kyodo News survey showed 106 of Japan's 712 lawmakers have had some connection with the group, with nearly 80 percent of them belonging to the ruling Liberal Democratic Party.