FOCUS: U.S-China tensions over Taiwan could prompt Japan to ramp up defenses

U.S. House Speaker Nancy Pelosi's visit to Taiwan has triggered cross-strait tensions and infuriated China while delivering a blow to relations between Washington and Beijing, but it may also prompt Japan to ramp up military spending as Tokyo moves to bolster its defenses.

A series of angry reactions from China came after the highest-level U.S. visit to Taiwan in 25 years was made in defiance of repeated warnings from Beijing, which regards the self-ruled democratic island as its own. 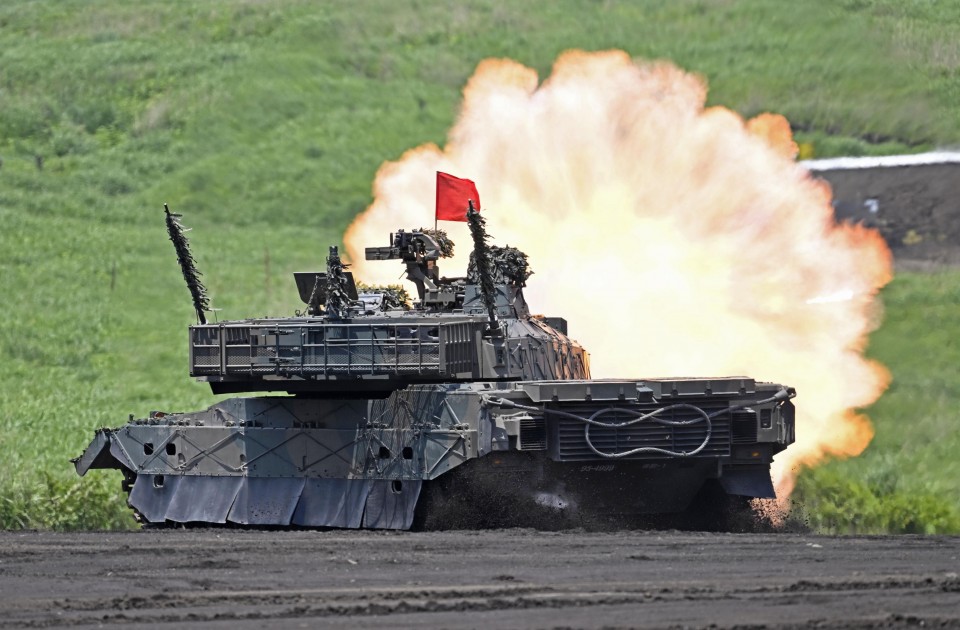 A Ground Self-Defense Force tank takes part in a drill near Mt. Fuji, southwest of Tokyo, on May 28, 2022. (Kyodo)

With Pelosi pledging an "ironclad" U.S. determination to preserve democracy during a meeting on Wednesday with Taiwan President Tsai Ing-wen, China is expected to flex its military strength as it postures in pursuit of reunification.

"The heightened threat to Taiwan's security by Beijing is very likely to make the Japanese government and public opinion more supportive of a policy" in which Japan continues its military buildup, said Tai Wan-chin, a professor emeritus at Tamkang University in New Taipei City.

As Taiwan is located just 110 kilometers away from an island in Japan's southern prefecture of Okinawa, concerns have also been rising in Tokyo over the increasingly tense situation.

Tai said Pelosi's visit could even provide significant momentum to efforts to revise the war-renouncing Article 9 of Japan's pacifist Constitution within a decade.

Japan's ruling Liberal Democratic Party, led by Prime Minister Fumio Kishida, has been looking to lift the country's defense spending over the next five years to an amount equivalent to 2 percent of gross domestic product or more, a target that members of the North Atlantic Treaty Organization strive to meet.

Kishida has also vowed to work on revising the U.S.-drafted Constitution, with pro-amendment forces securing a two-thirds majority in both chambers of parliament.

Some Chinese scholars believe Beijing will take advantage of Pelosi's visit to strengthen its sovereignty claim over Taiwan in an attempt to establish "a new status quo" in the region.

Lu Xiang, a research fellow at the Chinese Academy of Social Sciences, told the Global Times, a tabloid affiliated with China's ruling Communist Party, that Beijing's reaction will not just be a momentary action but will consider the whole security environment around Taiwan.

Upcoming Chinese military exercises to be held in locations encircling Taiwan could be unprecedented and "aimed at realizing reunification by force and also to fight against the external forces that could interrupt the reunification process," Lu said.

Communist-led China and democratic Taiwan have been governed separately since they split in 1949 due to a civil war. China regards Taiwan as a renegade province to be reunified with the mainland, by force if necessary.

Pelosi's Taiwan trip has triggered strong responses from China as it was made at "a particularly sensitive time" ahead of the Communist Party's twice-a-decade congress in the fall, when Chinese President Xi Jinping is keen to secure a controversial third term as leader, a U.S. scholar said.

"He cannot appear weak to his own people on the Taiwan issue," said David Lampton, a professor emeritus and senior research scholar at Johns Hopkins School of Advanced International Studies.

"In Beijing's mind, Washington is inching away from the 'one-China policy' toward a 'one China, one Taiwan policy'," said Lampton, former president of the National Committee on U.S.-China Relations in the United States.

The scholar warned Pelosi's visit will have "deleterious consequences" for Taiwan Strait stability, saying the current situation is "so dangerous" with China, the United States and Taiwan all "departing from the status quo that has kept the peace for decades."

The United States switched its diplomatic recognition from Taipei to Beijing in 1979, but it has maintained unofficial relations with Taiwan and supplies it with defensive weapons under an act passed by the U.S. Congress that same year.

However, Shi Yinhong, a professor of international relations at Renmin University of China, said there will not likely be a military clash between Washington and Beijing over Taiwan.

"The military measures, I believe, would be severe but necessarily less than those which have substantial risk to lead to military conflict," Shi said on China's response to Pelosi's visit. "The fundamental situation of the Taiwan problem should be regarded as largely stable at its (base)."

China and the United States have firmly established "the credibility of each side's bottom line in the other's mind, convincing (each other) that military conflict between them must be avoided absolutely until or unless it would be required absolutely," Shi said.

From the Taiwanese point of view, Pelosi's visit, the first since 1997 by the holder of the powerful congressional post, reassured Taipei of the United States' commitment, an important step at a time when Russia has invaded Ukraine and stirred fears China might follow suit in Taiwan, said Sung Wen-ti, a lecturer at the Australian National University.

"A visit by a sitting U.S. House speaker would renew an important precedent and instill faith into the Taiwanese society about the vibrancy of U.S.-Taiwan ties," said the political scientist from Taiwan.

Sung said he expects her trip will likely undermine U.S.-China relations only for a short time because the 82-year-old is "most likely going to step down" as speaker after the U.S. midterm elections in November and China will have "a face-saving off-ramp to 'reset' relations" with the United States.

(Ko Shu-ling in Taipei contributed to this report.)