Japanese Prime Minister Fumio Kishida on Monday urged the international community to join forces in realizing a world free of nuclear weapons as he unveiled an action plan at a review conference of a nuclear nonproliferation treaty.

As the first Japanese leader to attend the gathering held at the United Nations, Kishida called on nuclear states to enhance the transparency of their arsenals and said Japan will contribute $10 million to set up a U.N. fund to help young people learn about atomic bombs through visits to Hiroshima and Nagasaki. 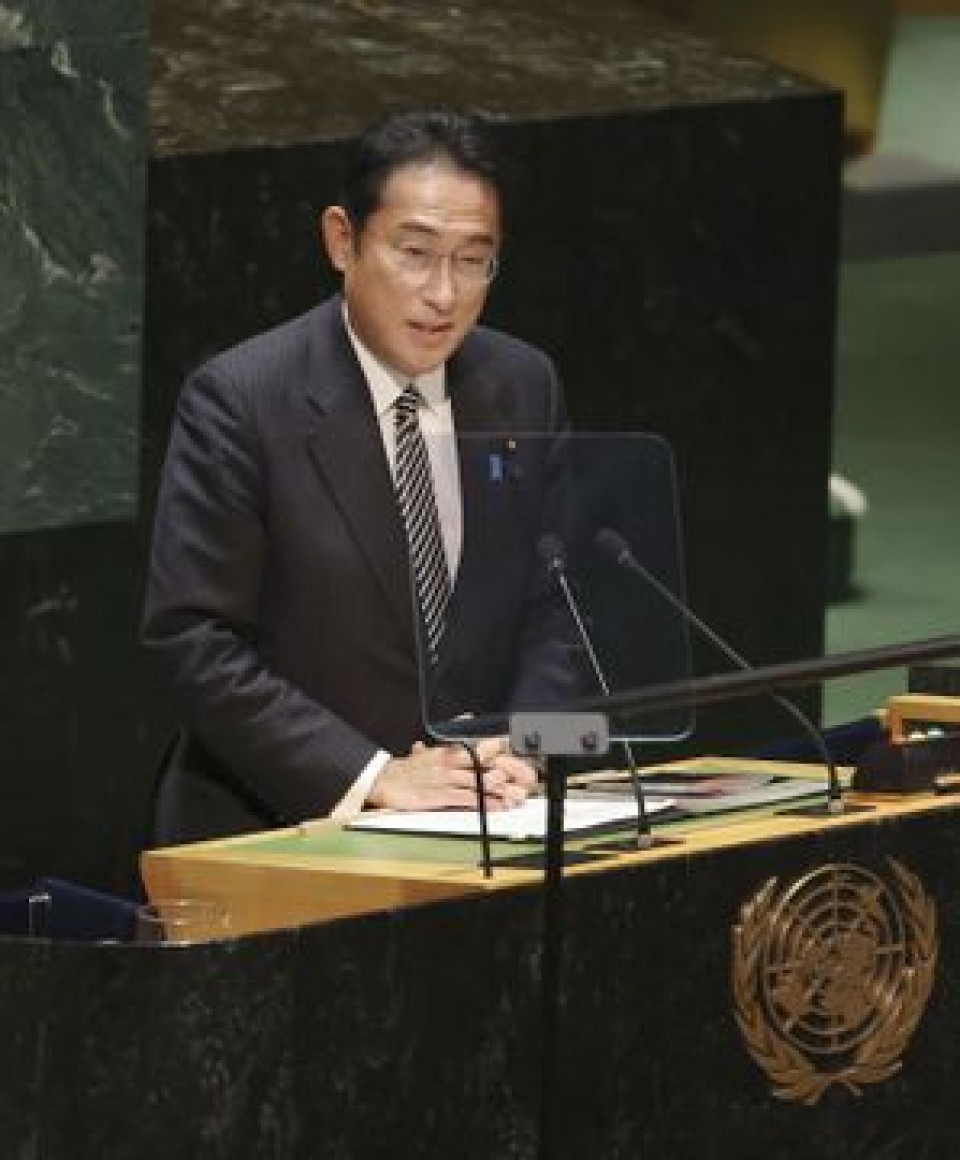 Hiroshima and Nagasaki were the two Japanese cities that were devastated by the U.S. atomic bombs in August 1945.

Kishida admitted the path to a world without nuclear weapons has become harder particularly as Russia's threat to use nuclear weapons in its war in Ukraine has raised alarm.

But the premier, elected from a constituency in Hiroshima, said giving up that path is "not an option."

"As a prime minister from Hiroshima, I believe that we must take every realistic measure toward a world without nuclear weapons step by step however difficult the path may be," Kishida said in his speech delivered in English.

Under the "Hiroshima Action Plan" presented to the review meeting on the Treaty on the Non-Proliferation of Nuclear Weapons, Kishida underscored it is important to continue the record of the nonuse of nuclear weapons and urged all nuclear weapon states to disclose information on the status of production of fissile materials.

The treaty, which is the world's most widely ratified agreement on nuclear arms controls, recognizes Britain, China, France, Russia and the United States as nuclear states.

The pact aims to prevent the spread of nuclear weapons and technology, promote the peaceful use of nuclear energy and achieve nuclear disarmament.

Kishida implicitly took a swipe against Russian President Vladmir Putin's order for his country's nuclear forces to be on high alert and the Russian attack on the Zaporizhzhia and Chernobyl nuclear plants.

"We should never tolerate the threat of the use of nuclear weapons, such as that made recently by Russia," Kishida said, adding, "The recent attacks on nuclear facilities by Russia must not be tolerated."

As North Korea is reportedly ready to conduct a nuclear test following a slew of missile tests this year, Kishida also said Japan will address North Korea's nuclear and missile issues while working in coordination with the international community.

The premier also called for maintaining the decreasing trend of the global nuclear stockpile.

Japan "supports the dialogue conducted between the United State and Russia for further reduction and encourages the United States and China to engage in a bilateral dialogue on nuclear arms control and disarmament," he further added.

To build momentum toward the entry into force of the Comprehensive Test Ban Treaty, Kishida also said Japan will convene a meeting of the CTBT Friends at the leaders' level during the U.N. General Assembly in September.

He said Japan will hold an international meeting of "eminent persons," such as political leaders and scholars, in Hiroshima on Nov. 23 to discuss nuclear disarmament.

The western Japan city will host a summit of the Group of Seven leaders next May as Japan aims to send out a message of peace following Russia's invasion of Ukraine.

"It is my intention to demonstrate our firm commitment from Hiroshima to never repeat the catastrophe of atomic bombings," Kishida said in his speech.

A review conference is held every five years. The latest round of the meeting was due to take place in 2020 but postponed amid the COVID-19 pandemic.

Kishida was foreign minister when the previous meeting ended without an outcome document due to disagreements among the participants.

Japan, which is protected under the U.S. nuclear umbrella, has not joined the Treaty on the Prohibition of Nuclear Weapons that came into force in 2021 despite calls, especially from atomic bomb survivors, for Tokyo to sign on.

The treaty has no nuclear powers as signatories.