U.S. Sen. Marsha Blackburn said Friday she will continue to support Taiwan based on its shared democratic values with the United States when meeting President Tsai Ing-wen, as tensions with China mount following an earlier visit by U.S. House of Representatives Speaker Nancy Pelosi.

Communist-led China, which claims self-ruled Taiwan as part of its territory, reacted sharply to Blackburn's visit, lambasting the United States for interfering in the Asian country's internal affairs.

Beijing is expected to keep carrying out military drills in areas encircling Taiwan in retaliation for attempts by Washington and the island to bolster their cooperation in the security and economic fields, foreign affairs experts said. 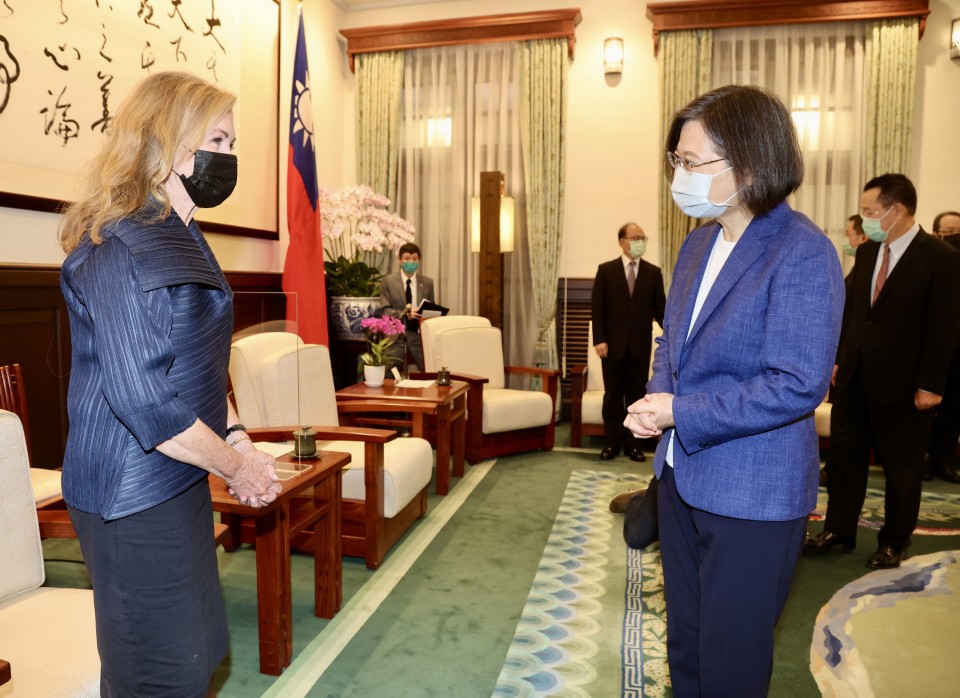 "It is important indeed that freedom-loving nations support Taiwan as they seek to preserve their independence and their freedom," Blackburn, a member of the Senate Armed Services Committee, said in the meeting with Tsai at the Presidential Office.

Tsai commended Blackburn for coming at a "key moment," saying the recent string of visits by U.S. public figures to Taiwan is a firm demonstration of support that has "reinforced Taiwan's determination to defend itself."

In light of Russia's invasion of Ukraine and China's military exercises in the vicinity of Taiwan, Tsai said democracies must further unite to defend the shared values of freedom and democracy.

Tsai also maintained Taiwan and its international partners must deepen economic and trade cooperation such as by building more secure and resilient supply chains.

Blackburn echoed Tsai's remark by saying that a critical supply chain of semiconductor is vitally important to her constituency of Tennessee, a major automotive manufacturing state.

After the trip by Pelosi, the third-highest-ranking U.S. official, to the island in early August infuriated China, a delegation of U.S. lawmakers headed by Senator Ed Markey also visited from Aug. 14 and met Tsai.

The high-profile U.S. visit to Taiwan prompted Beijing to increase its military activities around the island, including large-scale military exercises and repeated crossings of the centerline between China and Taiwan, a boundary that has been respected by both sides for decades.

People's Daily, the official newspaper of the ruling Chinese Communist Party, said the United States has fanned the crisis.

Blackburn arrived on the island on Thursday. She said in a statement issued the same day that her trip to meet with leaders in Taipei is intended to "advance and strengthen our partnerships" and that regular high-level visits to Taipei are "long-standing U.S. policy."

"I will not be bullied by communist China into turning my back on the island," the senator said.

Pelosi, a Democrat, became the first U.S. House speaker in 25 years to visit Taiwan, despite strong warnings from China. Beijing views the island as a renegade province to be reunified with the mainland, by force if necessary.

The United States changed its diplomatic recognition from Taipei to Beijing in 1979 but has kept up unofficial relations with Taiwan while supplying the island with arms and spare parts to help it maintain sufficient self-defense capabilities.