The United States on Thursday slammed China's firing of an estimated 11 ballistic missiles near Taiwan following the House of Representatives speaker's visit to the island, and pledged "further steps" to show its security commitment to Japan and other allies in the region.

"China has chosen to overreact and use the speaker's visit as a pretext to increase provocative military activity in and around the Taiwan Strait," White House National Security Council spokesman John Kirby said, calling the missile launches "irresponsible" and at odds with the goal of maintaining peace and stability in the region. 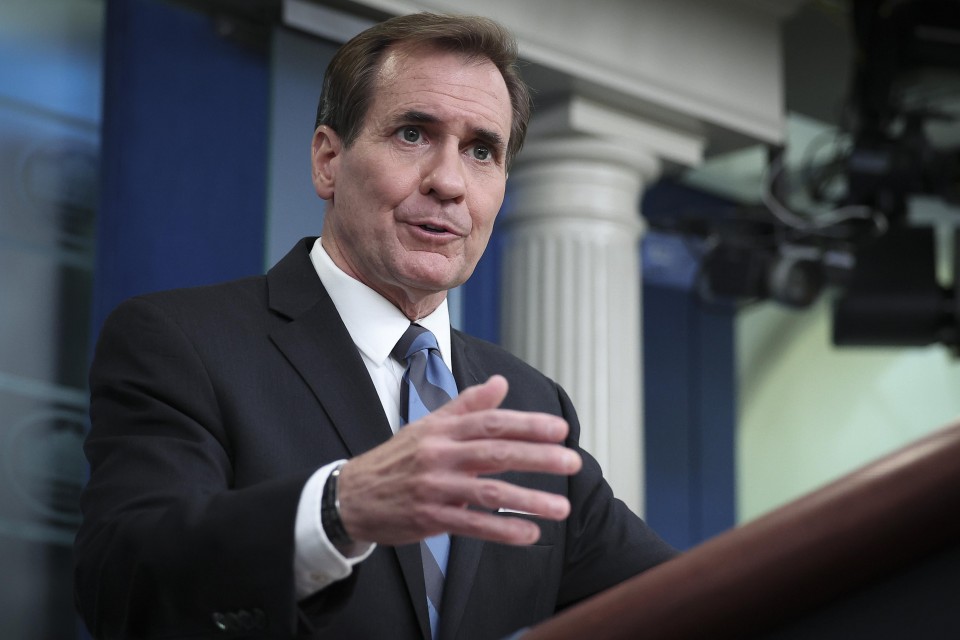 Touching on Japan's announcement that five of the 11 Chinese missiles landed in the country's exclusive economic zone, Kirby said it was "another example of how China's actions are undermining peace and security in the region."

The United States is expecting from China more exercises and more bellicosity and rhetoric, he said.

Secretary of Defense Lloyd Austin on Thursday directed the aircraft carrier Ronald Reagan and the ships in its strike group to "monitor the situation," Kirby said. The carrier, whose home port is in Japan's Yokosuka, near Tokyo, is believed to be sailing in the Philippine Sea, east of Taiwan.

The U.S. military will conduct "standard air and maritime transits" through the strait in the next few weeks, he added, emphasizing that this will be consistent with the long-standing U.S. approach to defending freedom of the seas and international law.

"We will take further steps to demonstrate our commitment to the security of our allies in the region, and that includes Japan," Kirby said.

But at the same time, he reiterated that the United States has no intention of escalating tensions in the region further and that it will reschedule a Minuteman III intercontinental ballistic missile test that was slated for this week.

China's missile launches were part of a large-scale drill that began on Thursday around Taiwan in response to U.S. House Speaker Nancy Pelosi's trip to the island -- the first in 25 years by a holder of the powerful congressional position -- which came despite repeated warnings from Beijing.

Her visit was the latest show of U.S. support for the democratic island, which is facing increasing military pressure from Beijing.

Beijing views Taiwan as a renegade province awaiting reunification with the mainland, by force if necessary. It has opposed any form of what it views as "official interaction" between the United States and the territory.

The United States changed its diplomatic recognition from Taipei to Beijing in 1979, but has kept up unofficial relations with Taiwan and supplies the island with arms and spare parts to help it maintain sufficient self-defense capabilities.

While China says that the increased military activities around Taiwan are in protest at Pelosi's trip, Kirby asserted that they are also a "pretext" to "actually try to set a new status quo to get to a new normal where they think they can keep things at."

"They're boiling the frog, right? They're taking the temperature up to a higher level, with perhaps the intention of maintaining that sort of intensity or at least being able to conduct those kinds of operations on a more frequent, regular basis going forward," he said.

"That's a different status quo than the one that we had just a few days ago, just a week ago," the former Pentagon spokesman said.