Nearly 80 percent of judges in major Japanese arts competitions across nine sectors, including music and manga, have been men over the past 10 years, an organization of artists said Wednesday.

A report by the group "Hyogen no Genba Chosadan," which aims to promote gender parity across the artistic fields, found that 77 percent of the judges of the competitions and 66 percent of top-prize winners were men with the results highlighting the potential barriers women face in their careers.

"There are numerous instances where talent was prevented from moving forward and was buried because of gender," Chiki Ogiue, a critic involved in the study, said during a press conference with the group in Tokyo.

The report analyzed the gender proportions of judges and winners in competitions held from 2011 to 2020 for art, theater, film, literature, architecture, music, design, photography and manga. 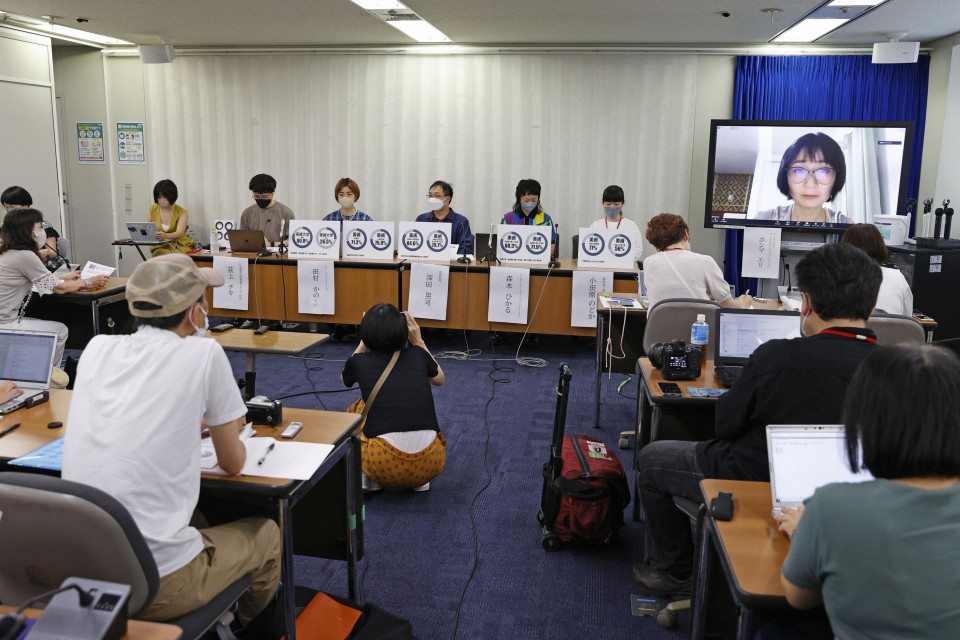 "Hyogen no Genba Chosadan," a group aiming to promote gender parity across artistic fields, holds a press conference in Tokyo on Aug. 24, 2022. (Kyodo)

The gender imbalance was especially stark in literary competitions, where 95 percent of judges and 76 percent of the top-prize winners were men.

In one contest sponsored by Shinchosha Publishing Co., all judges and winners in the decade were men.

"When diversity among the judges is not secured, and fairness may not be guaranteed, it can distance future writers who want to send in applications to debut," said sculptor and critic Nodoka Odawara at the press conference.

Meanwhile, some 86 percent of judges and 82 percent of top-prize winners in architecture contests were men, although five out of the nine organizations analyzed, including the Architectural Institute of Japan, did not release data on the judges.

In classical music, men made up 86 percent and 59 percent of judges and grand prize winners, respectively.

"Opportunities (for artists) to step up are dominated heavily by men," said Eri Homma, a member of the artist duo Kyun-Chome, who was in charge of analyzing gender balance in the arts. "This skews perspective and assessment (of the works)."

All top winners of the art division in the Japan Media Arts Festival, organized by the Agency of Cultural Affairs, were men, she said, adding that it "should be reassessed."

Ogiue said the reason behind a lack of women in winners has been said to be the result of open competition. But "the unfairness has been made visible with the numbers," she added.