Yoshihito Nishioka reached the third final of his ATP singles career on Saturday when he beat top-seeded Russian Andrey Rublev in their Citi Open semifinal Saturday in Washington, D.C.

The world No. 96 Japanese claimed a 6-3, 6-4 win over Rublev, a player who is ranked 88 places higher than him and has won three titles this year. 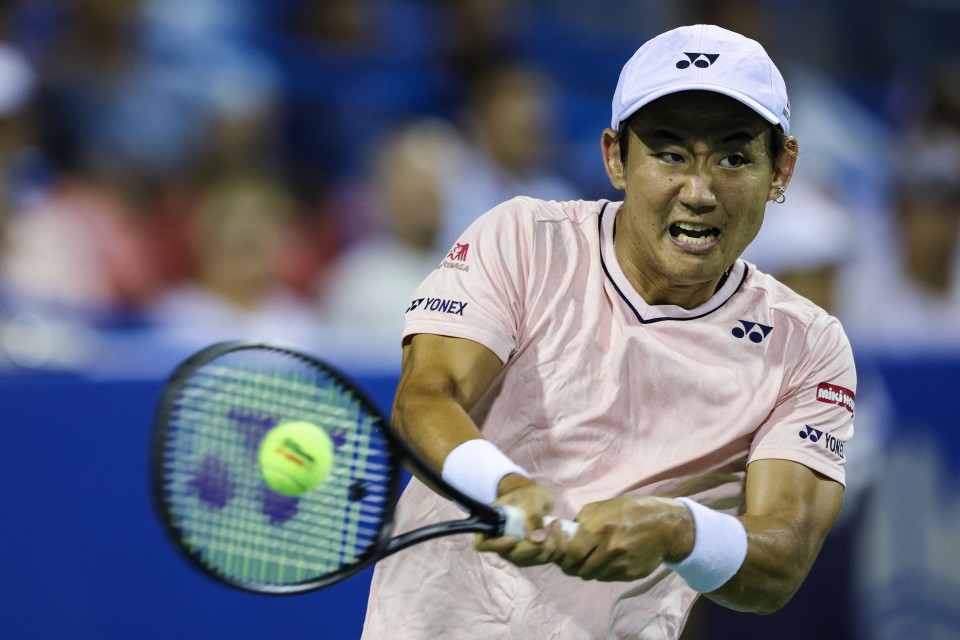 Yoshihito Nishioka of Japan returns a shot to Andrey Rublev in the men's semifinal of the Citi Open at Rock Creek Tennis Center on Aug. 6, 2022, in Washington. (Getty/Kyodo)

Nishioka faces Nick Kyrgios for the ATP 500 tournament crown on Sunday. The Australian has continued his fine form from July when he reached the Wimbledon singles final and claimed a doubles title in Atlanta.

"I love to play here, I have been here many times. But for tomorrow, everyone loves Nick as well. Hopefully still they...(cheer for) me, but I am just (going to) enjoy the day tomorrow," Nishioka said according to the ATP website.

Nishioka has done some giant-killing in the U.S. capital with wins over four seeded players, giving him a good chance to beat Kyrgios for the first time in four tries.

He beat world No. 21 Australian Alex de Minaur in the second round and No. 24 Russian Karen Khachanov in the third before taking out the 40th ranked player, Briton Daniel Evans, in the quarterfinals and then moving on to Rublev.

"Today I felt very tired before the start of the match, and for sure I felt I (couldn't) do the same thing like I did against Evans and Khachanov," Nishioka said. "I tried to be a little bit aggressive because I knew Andrey was going to play aggressive to me."

Nishioka's only previous title came in 2018 in Shenzhen and he reached the final at Delray Beach in 2020. If he can beat Kyrgios, he will climb to a career-best No. 42 in the world, according to the ATP.