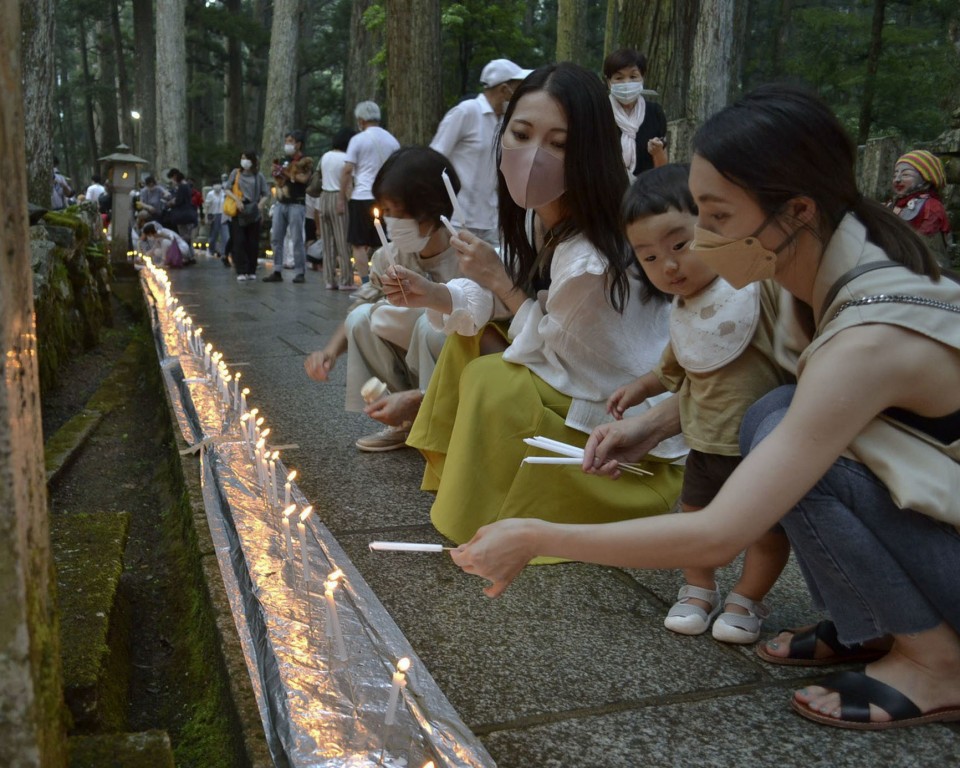 People light candles on a path leading to Okunoin temple during a candle festival in the Wakayama Prefecture town of Koya, western Japan, on Aug. 13, 2022. (Kyodo) ==Kyodo

Her visit to Japan for the Sept. 27 ceremony will be her first since she was sworn in as vice president under President Joe Biden in January 2021.

TOKYO - Japanese train stations, airports and expressways were crowded Sunday as the majority of travelers returned from their summer vacation.

Although many visited their hometowns or elsewhere for the first summer holiday season in three years without COVID-19 restrictions on domestic travel in place, the operators of some transport networks reported sluggish sales as the country continues to grapple with a seventh wave of infections.

TOKYO - Three candidates entered the race for the leadership of the Japan Innovation Party on Sunday to succeed Ichiro Matsui, as the party steps up efforts to become the country's biggest opposition force after significantly increasing its parliamentary seats in the last two national elections.

The conservative party's co-leader Nobuyuki Baba is seen as the most likely winner of the Aug. 27 election, ahead of the other candidates Yasushi Adachi and Mizuho Umemura.

TOKYO - Many tofu shops in Japan are struggling amid higher prices for imported soybeans following Russia's invasion of Ukraine, although demand remains solid for the Japanese staple.

A tofu shop run by Takashi Kurosawa in Tokyo's Minato Ward is among the around 42 percent of medium-sized and small stores that remained in the red in the fiscal year ended March, with 47 percent incurring losses in the previous year, according to a recent survey by credit research firm Teikoku Databank Ltd.

BEIJING - About 150 Chinese children, their parents and others shared their love of dinosaurs in a recent exchange event held at the Japanese Embassy in Beijing, which featured the screening of a popular animation Doraemon movie and a scholar inspired by its main character.

After the participants saw the film "Nobita's Dinosaur 2006," Xing Lida, 39, an associate professor at the China University of Geosciences in Beijing, explained that his impression of the cartoon led him to name a footprint fossil of a new species of dinosaur discovered in China after the pivotal character.

TOKYO - Typhoon Meari made landfall on the Izu Peninsula on Japan's Pacific coast close to Tokyo on Saturday, causing disruptions to the roads and train and air services during the peak summer holiday season, the weather agency said.

The agency has warned of disasters including potential landslides, flooding in low-lying areas, overflowing rivers, strong winds and high waves.