Investor sentiment was hurt as the Dow Jones index logged its largest point drop since mid-May on Friday after Powell's speech at a forum in Jackson Hole, Wyoming, prompting the Nikkei to lose over 850 points at one point and finish down 762.42 points, or 2.66 percent, from Friday to close at 27,878.96, the lowest finish since Aug. 10. 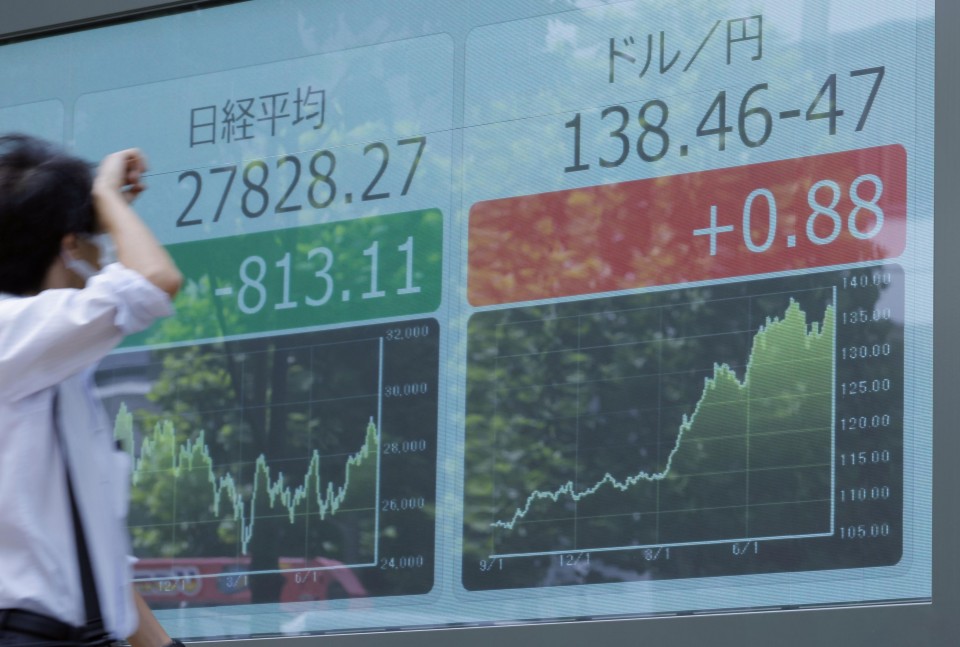 The broader Topix index finished 35.49 points, or 1.79 percent, lower at 1,944.10. On the top-tier Prime Market, all the sectors declined except mining and oil and coal product issues.

In his speech, Powell warned that efforts to bring down inflation through interest rate hikes would inflict "some pain" on the economy, disappointing investors, who had expected the Fed to ease up on its aggressive rate hike campaign.

"Powell's remarks therefore shocked (investors) and led to selling all over Asia after the Dow dropped over 1,000 points," Fujito said, adding that Japanese shares may continue their downtrend on Tuesday.

On the foreign exchange market, the dollar briefly rose to a one-and-a-half month high of 139.00 yen on expectations that the Fed's rate hikes will widen the interest-rate gap between the United States and Japan, where the central bank maintains an ultraloose monetary policy.

"Powell's more hawkish than expected remarks stirred speculation that the Fed may not go for interest rate cuts next year," as some investors had hoped, said Takuya Kanda, senior researcher at the Gaitame.com Research Institute.

Bucking the downward trend, some automakers rose as the yen's sharp fall against the dollar fueled hopes for an increase in their overseas profits. Subaru gained 19.0 yen, or 0.8 percent, to 2,448.0 yen, while Honda Motors edged up 15 yen, or 0.4 percent, to 3,669 yen.