Shohei Ohtani came up empty in his third bid for history as the Los Angeles Angels fell to the Oakland Athletics 3-1 on Wednesday, leaving the two-way star stuck at nine wins.

No MLB player since Babe Ruth in 1918 has won 10 games as a pitcher and hit 10 home runs in the same season. Ohtani (9-7), who has 22 homers this season, gave up three runs, two of them earned, on seven hits, one walk and one wild pitch at Angel Stadium.

He also struck out seven in 5-2/3 innings, which snapped his streak of six straight starts with at least 10 strikeouts. He pitched into the sixth but left with two runners on base.

Shohei Ohtani of the Los Angeles Angels pitches in a baseball game against the Oakland Athletics on Aug. 3, 2022, at Angel Stadium in Anaheim, California. (Kyodo) ==Kyodo

"There's a pretty low chance of winning when you allow three runs," said Ohtani, who left the mound to a standing ovation from the announced crowd of 25,190.

Ohtani had a shot to win his 10th on July 22 in Atlanta, but the Angels managed only one run and he allowed six runs in the seventh after pitching six scoreless innings.

On his third try, Wednesday, Ohtani was not able to provide any offensive support for himself, going 0-for-3 at the plate before he was pulled for a pinch hitter in the seventh. Multiple media outlets reported he left the game due to a forearm cramp.

Ohtani's best swing at the plate came in the third, when he hit a bullet with two on, but lined into the second out.

"We could've won if I had gotten a hit there. We lost because I didn't," he said.

Sean Murphy drove in all three Oakland runs on a fourth-inning RBI single and a two-run sixth-inning homer off Ohtani, who lost for the third time in as many games.

At Tropicana Field, Toronto Blue Jays left-hander Yusei Kikuchi did not factor into the decision in the team's 3-2 loss to the Tampa Bay Rays, allowing two runs on three hits and one walk with five strikeouts in four innings. 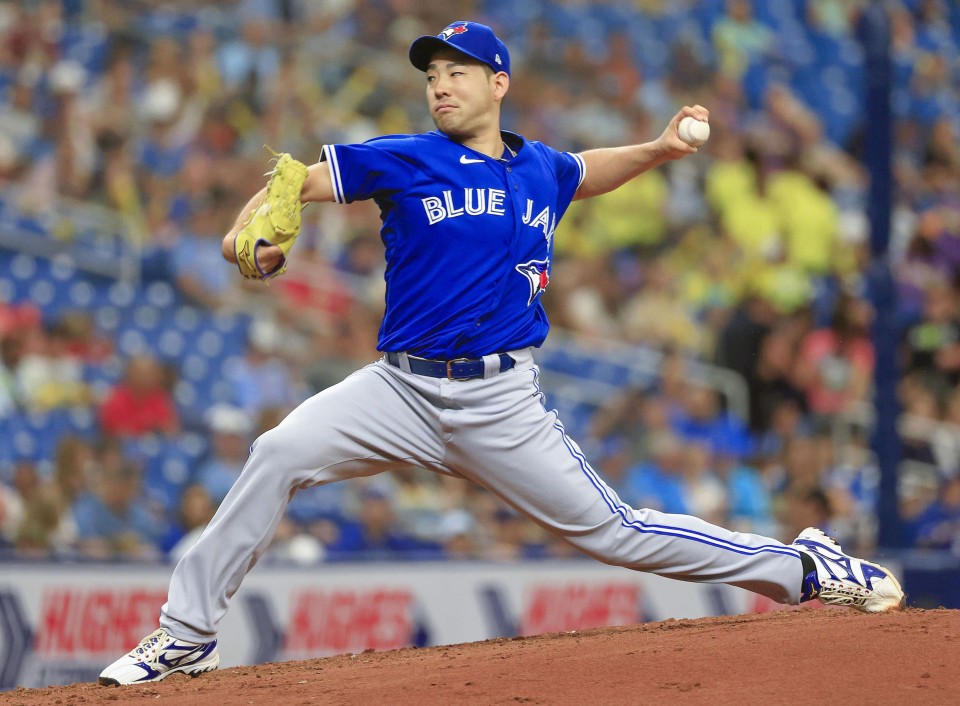 Yusei Kikuchi of the Toronto Blue Jays pitches during a game against the Tampa Bay Rays at Tropicana Field on Aug. 3, 2022, in St. Petersburg, Florida. (Getty/Kyodo)

Kikuchi, who struck out eight Tampa Bay hitters when he last pitched against them on June 30, had four strikeouts through the first two innings which he dominated, before losing some control in the third.

A hit-by-pitch, a single and a walk loaded the bases in the third, and a sacrifice fly from Isaac Paredes plated the Rays' first run. Kikuchi surrendered a second run in the fourth, on Taylor Walls' RBI fielder's choice.

The score was tied 2-2 when Kikuchi left the game.

"I wish I didn't give up the first run that way but I think I did the minimum work (expected from a starting pitcher)," Kikuchi said.

"It was frustrating (to be taken out after four innings), but the team has its reasons. If I pitch better and I'm able to set the pace, I'll be asked to go deeper into games."

David Peralta, who was acquired by the Rays from the Arizona Diamondbacks on Saturday, singled home the game-winning run off Adam Cimber (8-4) in the sixth inning.

Kikuchi threw 74 pitches in his second start after a three-week layoff due to a neck strain. Last week, he earned the win over the Detroit Tigers, pitching five innings of one-run ball.