Many tofu shops in Japan are struggling amid higher prices for imported soybeans following Russia's invasion of Ukraine, although demand remains solid for the Japanese staple.

A tofu shop run by Takashi Kurosawa in Tokyo's Minato Ward is among the around 42 percent of medium-sized and small stores that remained in the red in the fiscal year ended March, with 47 percent incurring losses in the previous year, according to a recent survey by credit research firm Teikoku Databank Ltd. 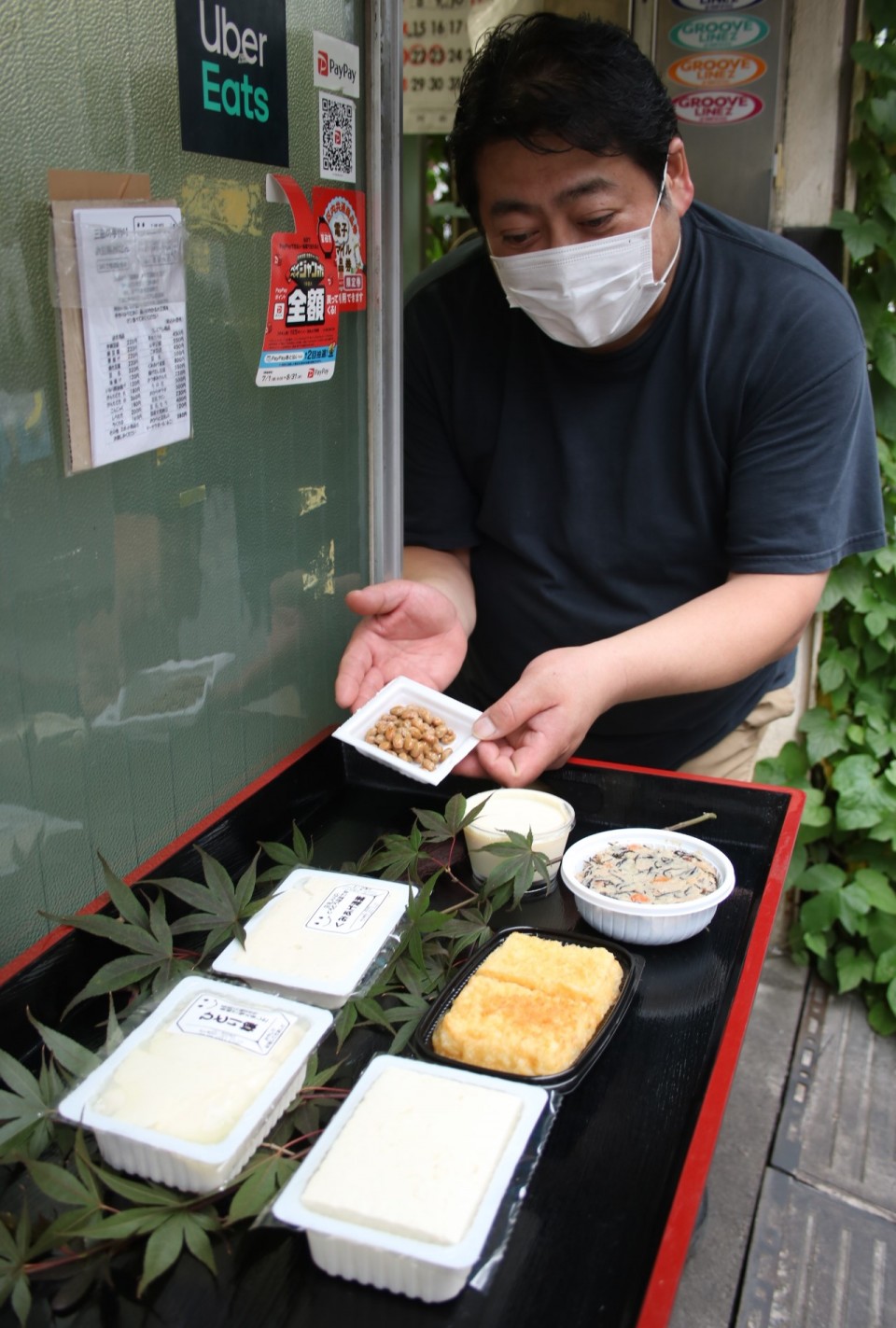 Takashi Kurosawa displays tofu and other products in front of his shop in Tokyo's Minato Ward on Aug. 5, 2022. (Kyodo)

"Not only soybeans, but plastic trays, (packaging) film. The price of everything has been increasing," the 53-year-old said, adding the costs of electricity and the oil necessary to make fried tofu are also rising.

Tofu, sold in supermarkets and small family-run shops, has gained attention overseas as a healthy food item that is low in fat and high in protein.

Although the tofu market has declined since hitting a peak of 338 billion yen ($2.5 billion) in fiscal 2016, the rate of decrease has slowed, with the market remaining above the 300 billion yen line, as more people eat at home due to the coronavirus pandemic, the report said.

Some tofu shops reported increased sales thanks to the popularity of new tofu products such as protein bars that are sold as health food products.

But tofu producers are finding it difficult to turn a profit as imported soybean prices have surged and they are unable to pass on the higher costs to supermarkets that often sell tofu at bargain prices, the report said.

Affected by the war in Ukraine, a weaker yen and increased imports by China, the prices of soybeans produced overseas are estimated to have surged 30 percent in 2022 compared with a year earlier and 75 percent from 2015, Teikoku Databank said.

Despite the rising costs, the average price of tofu remained at around 60 to 70 yen per 300 grams, almost the same level as 2015, it said.

As a result, imported soybeans now account for around 12 percent of the sales price of a block of tofu, up sharply from around 6 to 7 percent in the years through 2020, it said.

Kurosawa, who took over the tofu shop opened by his father around 40 years ago near the Azabujuban district where many embassies are located, supplies "premium tofu" made from domestic soybeans for high-end customers.

Although Kurosawa does not use imported soybeans for his products, the price of domestically grown soybeans has also climbed, while the COVID-19 pandemic since 2020 has also reduced demand from restaurants, hitting his shop's bottom line.

Despite incurring losses in recent years, Kurosawa has managed to stay open as he owns the property and so does not need to pay rent.

"It became hard to sense the price hikes directly as they've been increasing little by little and we've got accustomed to it," he said.

But Kurosawa knows his shop's days are numbered as he will have to close within the year because of a redevelopment project.

Kurosawa and his wife Rika are now considering starting a service to ship their premium products to health conscious customers living abroad, he said.

They also plan to resume inviting foreign tourists to see the process of tofu production after the country relaxes COVID-19 border controls.