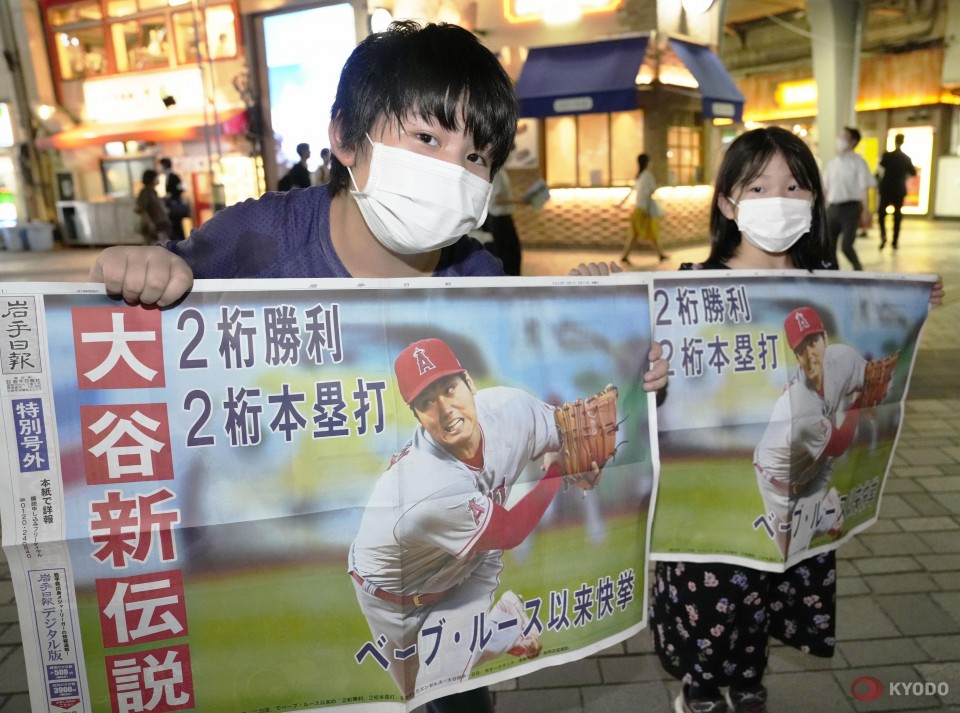 Children holds copies of an extra edition of Iwate Nippo newspaper, circulated in Iwate Prefecture, in front of JR Yurakucho Station in Tokyo on Aug. 10, 2022, after Los Angeles Angels pitcher and designated hitter Shohei Ohtani earned his 10th win of the season in a game against the Oakland Athletics in Oakland, California, the previous day, making him the first player with double-digit home runs as a batter and wins as a pitcher in a single Major League Baseball season since Hall of Famer Babe Ruth in 1918. Ohtani hails from the northeastern Japan prefecture. (Kyodo) ==Kyodo

The large-scale exercises began on Aug. 4 as part of China's fierce response to U.S. House of Representatives Speaker Nancy Pelosi's visit earlier last week to the self-ruled island, which Beijing views as a renegade province to be reunited with the mainland, by force if necessary.

Kishida Cabinet's support rate up to 54% after reshuffle: Kyodo poll

The support rate in the two-day nationwide telephone survey from Wednesday, when the Cabinet was reshuffled, came after its approval rating dropped to a worst-ever 51.0 percent in the previous poll conducted on July 30 and 31.

TOKYO - Japan's summer holiday season started in full swing on Thursday, with reservations for domestic trains and flights leaving Tokyo reaching a peak as travelers took advantage of a lack of coronavirus restrictions for the first time in three years.

While more people headed abroad for their break, numbers are nevertheless far below the pre-COVID-19 era as new cases across the country remain elevated, hitting record highs in recent weeks.

BEIJING - Leader Kim Jong Un has declared victory in North Korea's fight against the coronavirus and ordered an easing of "maximum emergency" measures imposed in May, official media reported Thursday, with his sister suggesting he may have caught the virus himself.

Kim made the announcement at a meeting with health officials and scientists on Wednesday, praising their contributions to "successfully defusing the serious epidemic spread crisis" and defending the country's "social system which is the best in the world," according to the Korean Central News Agency.

ASHIKAGA, Japan - Those wondering how the Netflix sci-fi thriller "Alice in Borderland" was able to completely empty of life one of the world's busiest pedestrian crossings will find their answer around 90 kilometers from the real thing, in quiet Tochigi Prefecture suburbia.

TOKYO - Food prices will continue to surge in Japan for the latter half of 2022, with more than 10,000 items set to rise in price from August onward as import costs of materials become more expensive due to a weaker yen, according to a survey by a credit research company.

The Teikoku Databank survey found prices of 2,431 items are scheduled to rise in August, with hikes for 8,043 more items planned for later this year.

TOKYO - A drop in public support has come as a jolt to Prime Minister Fumio Kishida, who has yet to deliver on his promise to create a new form of capitalism.

Economic growth is a prerequisite for Kishida's goal to spread more wealth among the public. But accelerating inflation in Japan, blamed on Russia's war in Ukraine, has already begun to hit households while wages are not rising much, threatening to cloud the outlook for the world's third-largest economy.

Beginning in October 2021, Shahram Poursafi, a 45-year-old Iranian, attempted to arrange the murder of Bolton, likely in retaliation for a U.S. airstrike that killed top Iranian commander Qasem Soleimani in January 2020. Bolton was adviser to then U.S. President Donald Trump and is known for his tough stance on Tehran.