Japanese shoppers are increasingly being given the opportunity to take reusable containers to buy food and other items by weight or volume to reduce the amount of plastic packaging they take home from the supermarket while cutting down on food wastage.

Consumers in Japan are faced with an overwhelming amount of plastic packaging when shopping at supermarkets as compared to other countries, leading certain companies and their loyal customers to make an environmentally-friendly change.

In various areas of the country, people are bringing their own reusable containers to stores and buying just what they need, while a scale manufacturer has developed a device that automatically identifies and weighs products to serve the growing demand for a new way to shop at major stores.

Specialty store Poco Mucho, which opened in the city of Fukuoka, southwest Japan in April 2020, sells some 200 different foodstuffs and daily necessities by weight, such as smoked pistachios at 80 yen per 10 grams and peanut butter at 55 yen for the same amount. 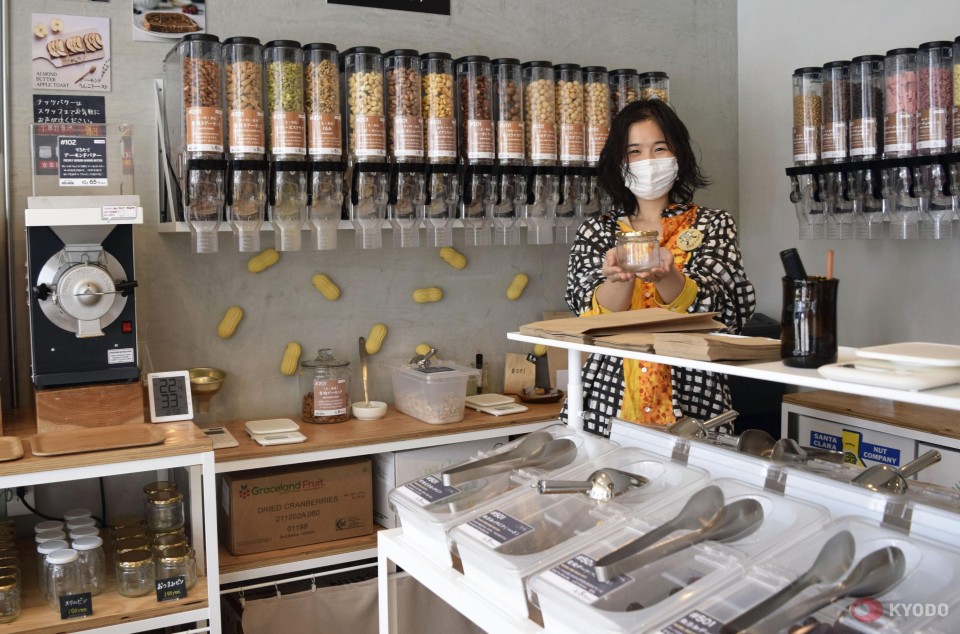 Shoppers pay for products after they are weighed in a store-provided paper bag or bottle. Customers receive a 3 percent discount if they bring their own shopping bags or containers.

"I wash out my little bottle when it is empty and bring it with me when I return," said a 38-year-old nurse who is a regular shopper at Poco Mucho. "The attraction is you can buy a bit at a time, as much as you want to eat," she said.

Shops in Europe and the United States have already begun making efforts to cut down on plastic waste. In France, there has been a movement to phase out the use of plastics for wrapping and packaging products.

In Japan, containers and packaging account for more than 60 percent of household waste by volume, according to the Environment Ministry, with supermarkets and other large retailers making it near-impossible to avoid plastic by selling items, even fruits and vegetables, in individual wrappings.

The ministry says home waste can be significantly reduced if more shoppers bring their own shopping bags and containers.

Stores in the Hagoromo Shopping District in Tachikawa, western Tokyo, are promoting incentives to encourage customers to bring their own shopping bags and containers.

For example, Sayamaen, a Japanese tea retailer, hands out stickers, redeemable for future purchases, to customers who bring their own tea canister.

"Eco-shopping is taken for granted by both customers and shops here," said Kazuko Ikeya, the 69-year-old manager of Sayamaen.

Among big retailers, Lawson Inc. sells candy and daily necessities by volume at 10 of its Lawson or Natural Lawson convenience stores in Tokyo and Kanagawa prefectures.

Kao Corp., a top toiletry and cosmetics manufacturer, has begun a trial in which it sells detergents and fabric softeners by volume at some drugstores in Chiba and Kanagawa prefectures. Fruit retailer Dole Japan Inc. has set up spaces in supermarkets in Tokyo and surrounding areas to sell bananas by weight.

But shifting to these kinds of sales can be a slow process. 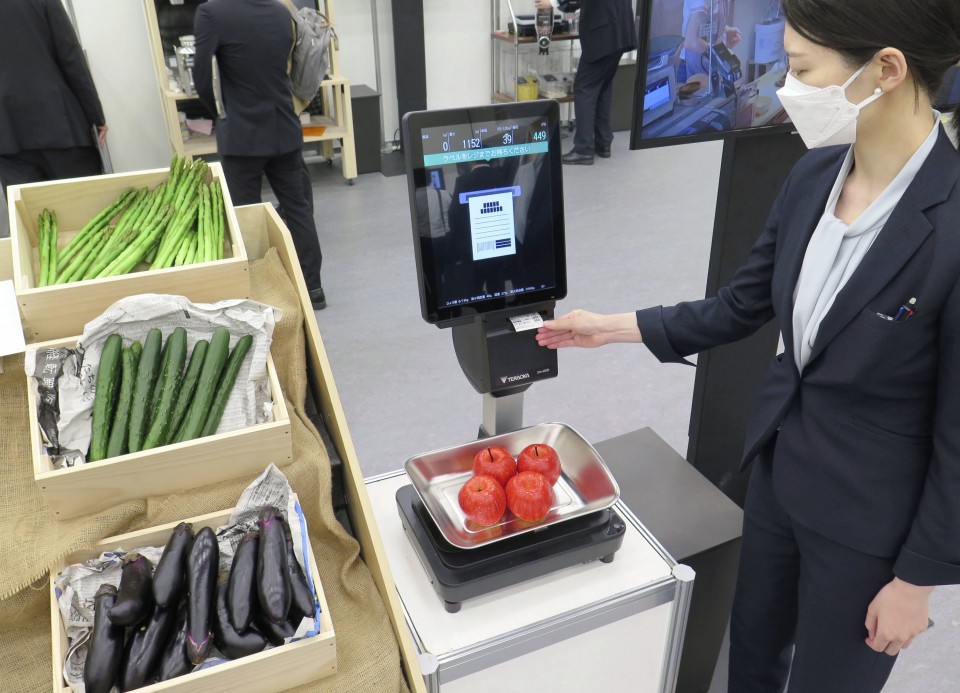 Photo taken in July 2022 shows a woman using machinery maker Teraoka Seiko Co.'s artificial-intelligence-based measuring device in Fukuoka, southwestern Japan. A price tag is printed out when fruits or vegetables are placed on the scale.(Kyodo)

Machinery maker Teraoka Seiko Co. is trying to address the challenge by developing an artificial intelligence-equipped measuring device that automatically recognizes a vegetable or fruit on a tray using image diagnostic technology. Once it has understood what the item is, it weighs it and prints out a price label.

Currently, individual vegetables and fruits of different sizes often sell at the same price as long as they have similar shapes. Since prices can now be determined by weight, "We can sell items that have been considered non-standard," said a Teraoka official.

"Sales by measurements are likely to become more widespread as they are effective in attracting repeat shoppers," he said.