A Japanese court sentenced a 23-year-old man to four years in prison on Tuesday for setting fire to empty houses in a community of Korean residents in Kyoto Prefecture a year ago, in a case seen by the residents as a hate crime.

The ruling by the Kyoto District Court in the trial of Shogo Arimoto was in line with the sentence demanded by prosecutors, who argued in previous hearings that he committed the crime "out of a hatred of Koreans." The defendant had admitted to the charges.

"(The act) was very selfish and based on prejudice and hatred toward 'zainichi' (ethnic Korean residents) and Korean people -- people of a particular background," said Presiding Judge Keisuke Masuda. 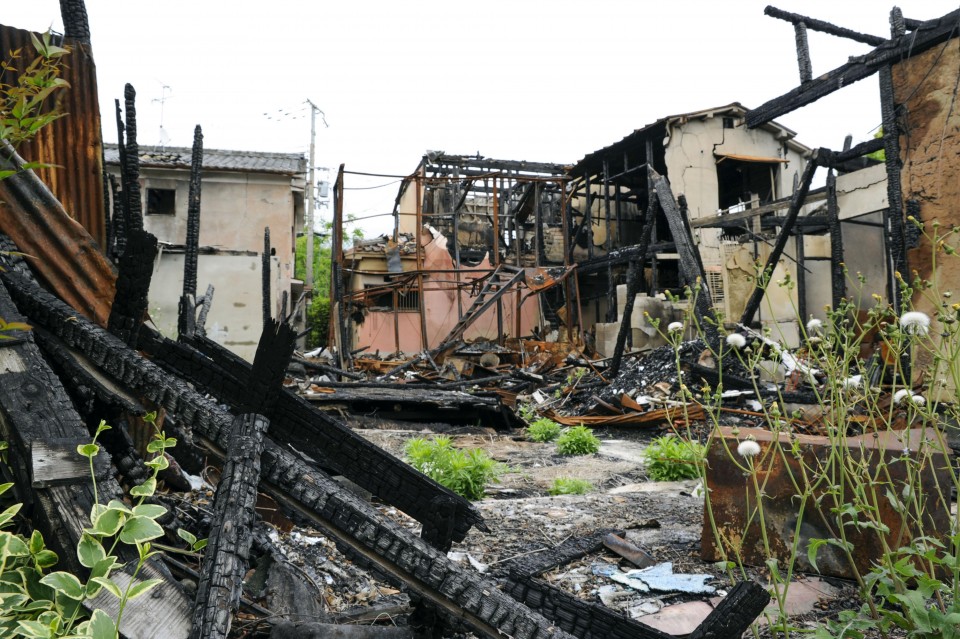 File photo taken in April 2022 shows houses in the Utoro district of ethnic Koreans in Uji, Kyoto Prefecture, destroyed by fire in an arson. (Kyodo)

Arimoto had also been implicated in arson attacks at two buildings associated with South Korea in Aichi Prefecture, central Japan, in July 2021.

According to the ruling, the unemployed man started a blaze in an unoccupied wooden house in the Utoro district of ethnic Koreans in Kyoto's Uji last August that left seven buildings gutted or damaged.

Although no one was injured, the fire also burned down about 40 signs that used to stand on Utoro streets that were due to have been put on display at the Utoro Peace Memorial Museum.

Arimoto told the court during the trial that he had wanted to hamper the museum's opening by destroying its exhibition items. The museum opened in April this year as planned.

He said that while he had had no direct contact with people with Korean roots, he grew to hate them as a result of news reports regarding disputes over history related to Japan's colonial rule of the Korean Peninsula from 1910 to 1945.

The museum chronicles the history of the Utoro district, formed by descendants of wartime Korean laborers who were left abandoned after construction of an airfield was halted in 1945 with Japan's defeat in World War II.

In Tuesday's ruling, Masuda said the man's actions to block the opening of a facility or an exhibition because it went against his views was "absolutely unacceptable in a democratic society."

Arimoto's defense had sought a lenient sentence, saying that although his motives could not be condoned, he had become socially isolated.

Hundreds of thousands of people with Korean backgrounds live in Japan. Most of their ancestors came to Japan before and during the war.