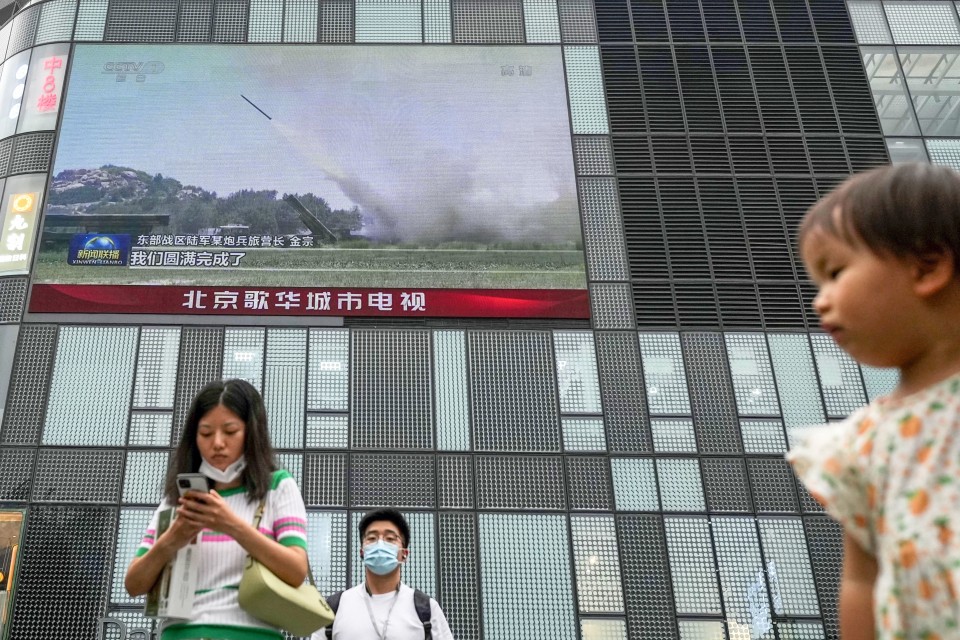 A large screen on a street in Beijing shows on Aug. 4, 2022, news that the Chinese military conducted a military drill in the strait dividing Taiwan and the mainland. The exercise is seen as a response to a recent visit by U.S. House Speaker Nancy Pelosi to Taipei. (Kyodo) ==Kyodo

The ministry said in a statement that since the Chinese People's Liberation Army started four days of live-fire drills in six areas surrounding Taiwan on Thursday, Chinese warplanes and naval ships have been detected crossing the median line of the Taiwan Strait.

TOKYO - Prime Minister Fumio Kishida and U.S. House of Representatives Speaker Nancy Pelosi agreed Friday to jointly work to ensure peace and stability in the Taiwan Strait, after her visit to the self-ruled island prompted an angered China to respond with military drills, spiking regional tensions.

A day after five Chinese ballistic missiles fell within Japan's exclusive economic zone, Kishida strongly criticized China's behavior in his meeting with Pelosi, saying it threatened Japan and seriously impacts the peace and stability of the region and beyond.

BEIJING - China said Friday it has decided to impose sanctions on U.S. House of Representatives Speaker Nancy Pelosi and her immediate family following her visit to Taiwan earlier this week.

China's Foreign Ministry said the move is in response to her act of "egregious provocation" but did not elaborate on what kind of punitive measures will be imposed.

The premier was originally planning to make the changes in the first half of September but has since leaned toward bringing things forward before the extraordinary parliamentary session slated for the fall, the sources said Friday.

Heavy rain continues in areas along Sea of Japan

TOKYO - Torrential rain continued Friday in central prefectures along the Sea of Japan, with the weather agency continuing to warn of landslides and floods in wider regions hit hard by downpours since the previous day.

Some areas in Fukui, Shiga and Shimane prefectures saw record hourly precipitation, the Japan Meteorological Agency said, with Minamiechizen in Fukui logging 74 millimeters of rain in one hour on Friday morning.

PHNOM PENH - Chinese and Russian foreign ministers walked out Friday when it was their Japanese counterpart's turn to speak at an Association of Southeast Asian Nations-related meeting in Phnom Penh, diplomatic sources said, as the gathering was overshadowed by rising tensions in the Taiwan Strait.

China's Wang Yi and Russia's Sergey Lavrov left their seats apparently in protest at Japan's criticism of Beijing's military exercises that began Thursday in response to U.S. House of Representatives Speaker Nancy Pelosi's visit to Taiwan earlier in the week and its condemnation of Moscow's invasion of Ukraine since late February.

TOKYO - An extraordinary Diet session ended Friday without any debate over a controversial plan to hold a state funeral for slain former Prime Minister Shinzo Abe, while other key issues such as rising energy and food prices also went unaddressed.

The three-day session was held to deal with procedural matters following the House of Councillors election on July 10. Debates on issues, such as whether it is appropriate to hold a state funeral for the assassinated former leader, were expected to happen when parliamentary committee sessions were closed.

HIROSHIMA - A memorial service was held Friday in Hiroshima to mourn Korean victims of the 1945 U.S. atomic bombing of the western Japan city, including those who had been forcibly brought to Japan from the Korean Peninsula before and during World War II.

About 130 participants, including survivors, took part in the event at a monument memorializing Korean victims in the Peace Memorial Park on the eve of the bombing's 77th anniversary. It was organized by the pro-Seoul Korean Residents Union in Japan, or Mindan.