Desperate to secure labor for his small factory, Toshiaki Funakubo turned to Chinese "trainees," who came to Japan to acquire technical expertise and skills, for about two decades until around 2010, the time when China overtook Japan as the world's second-largest economy.

He treated them just like other workers. He invited them to his house for New Year's celebrations, and they went on trips together. But he now believes relying on such trainees, just because labor is in short supply, would not make small and midsize companies stronger because they could only stay a limited number of years.

He fears that Japan is losing its appeal as an ideal place to live and work in the first place. At 78, he raises the alarm that it is imperative for Japan, known for its strict immigration policy, to tackle the issue of foreign laborers head-on. 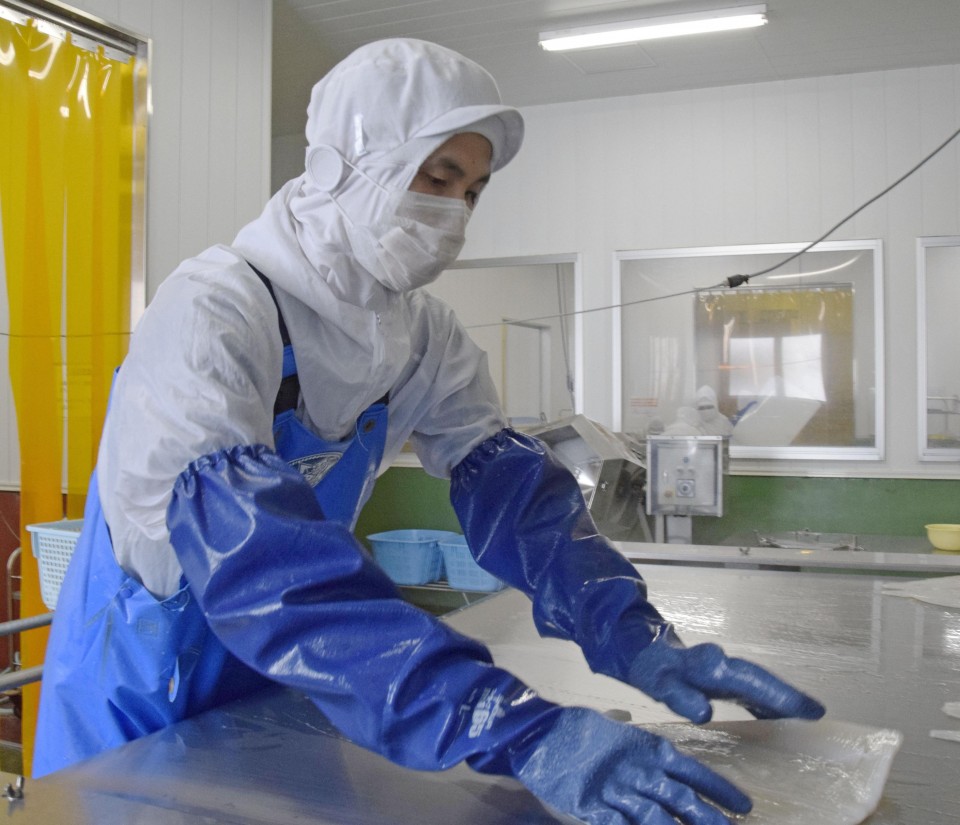 A technical intern trainee from Vietnam works at a seafood processing firm in Yamada, Iwate Prefecture, on Aug. 4, 2020. (Kyodo)

It is a matter of when, not if Japan will accept more foreign workers as immigrants to keep the economy going, he says.

"We need a unified system to take in foreign workers and integrate them into society," said Funakubo, whose company that manufactures testing materials for industrial products accepted over 20 Chinese trainees in the past.

In the coming months, the government is expected to review the program, which has been in place for about three decades. It allows foreign nationals to work at Japanese companies as trainees for up to five years and transfer the technical expertise and skills acquired during their stay.

Critics see the program as a cover for accepting cheap foreign labor, pointing out instances of low pay, overwork and human rights violations. Trainees are not allowed to bring in their family members or change their jobs, in principle. Thousands of them run away from their workplaces every year.

"The gap between the basic philosophy of the program and its actual operation has gradually widened over the past 30 years," Former Justice Minister Yoshihisa Furukawa, who left his post in a Cabinet reshuffle in August, has once said.

"As a result, it has become a program under which technical intern trainees find it difficult to draw up their career plans, and, structurally, human rights violations can occur," he said, expressing his resolve to bring the long-lasting issue to a "historic resolution" with the upcoming review. 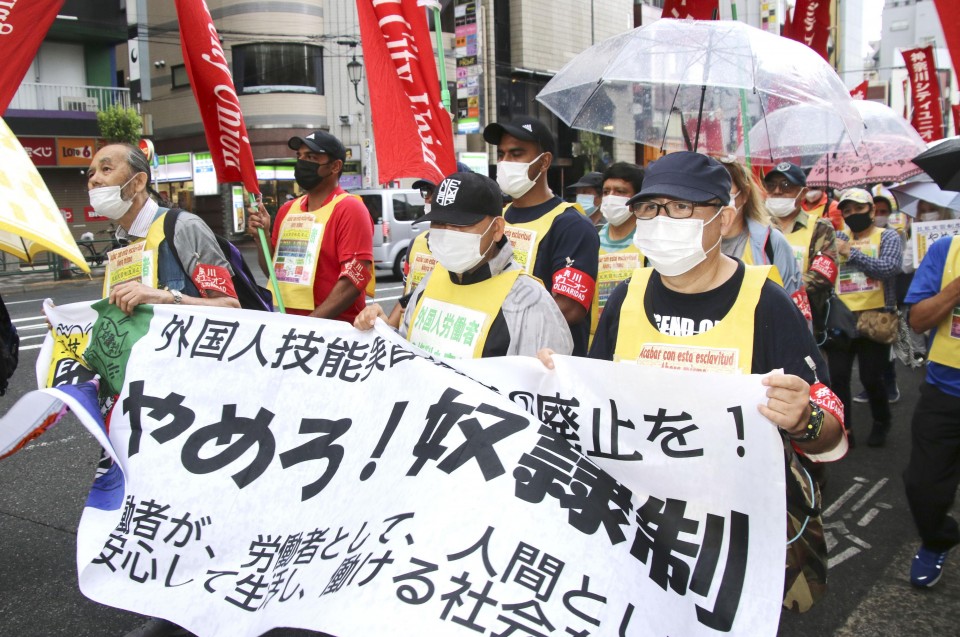 Protestors demand the scrapping of a technical intern training program for foreign nationals in Tokyo's Ueno area on June 12, 2022. The program has been criticized as a cover for importing cheap labor. (Kyodo)

Some 20 percent of foreign workers in Japan, or about 352,000, were technical intern trainees as of October last year. Those from Vietnam made up the largest group. The country also has "specified skilled workers," a visa category created in 2019 to address the country's acute labor shortages in fields such as construction, agriculture and nursing care.

According to a survey targeting nearly 2,200 technical intern trainees, 54.7 percent said they had borrowed money in their home country before coming to Japan. They paid an average of 542,311 yen ($3,900) to entities that send them to Japan and brokers, with those from Vietnam paying the highest 688,143 yen on average among countries from which such trainees come, the Immigration Services Agency of Japan survey showed.

The debt issue has been a concern for Japan and Vietnam, and the two nations are now trying to deal with it. At the request of Vietnam, arrangements are being made for the Japan International Cooperation Agency to help create a platform that will enable prospective trainees to gain direct access to information on job opportunities offered by Japanese companies and government-designated organizations in Vietnam in charge of dispatching such people.

The aim of the platform, which JICA hopes to fully launch in fiscal 2024 after a trial run next year, is to prevent people wishing to work in Japan from being forced to pay high fees to brokers, officials said. The platform will likely become accessible via smartphone.

As Japan is seen as lagging behind the United States and Europe in human rights due diligence, the government has drafted guidelines for companies to respect human rights throughout their supply chains. Though they are not legally binding, they specifically mention the need to protect the rights of technical intern trainees, citing instances in which their passports have been taken away.

Experts on immigration policy and foreign labor say Japan should do more. They point out that the technical intern trainee program has long been used as an easy fix to improve the labor supply-demand balance, allowing companies to secure cheap labor easily without having to restructure their operations or raise productivity.

"It won't be sustainable if we take the view that foreign workers can fill jobs that are not appealing to Japanese," said Eriko Suzuki, a professor at Kokushikan University in Tokyo, adding that the trainee program should be abolished.

In fact, the appeal of working in Japan has been declining over the years for those from Vietnam, Nepal, Indonesia and China, with the gap between minimum wages in their home country and Japan narrowing, according to data compiled by Takuya Hoshino, a senior economist at the Daiichi-Life Research Institute.

Vietnamese people earned roughly 40 times more working in Japan than in their home country a decade ago, but it was around 20 times last year. Competition is becoming fiercer for Japan with other Asian nations such as South Korea, where minimum wages are rising sharply, Hoshino said.

Experts say that the onus is on Japan to seriously rethink how it will boost its competitiveness and what it means to live with people of different nationalities and cultures who speak other languages.

"The population in Japan is declining, even more so in rural areas. Those are the places that need long-term non-Japanese residents who would be part of the community," Suzuki said.

"And for a diverse society to work, the minority getting sucked into the majority will not simply do. The majority also needs to change," she said.