Ever since award-winning Japanese documentary film director Masako Sakata's American husband died nearly two decades ago, she has been on a quest for answers about the tragic fallout caused by Agent Orange in the Vietnam War.

She was convinced her partner, Greg Davis, who served three years in the U.S. military in Vietnam through 1970 and was later diagnosed with liver cancer, died as a result of his exposure to the toxic defoliant.

But what she discovered with her own eyes after repeated visits to the Southeast Asian country from 2004 would produce much more than "Agent Orange -- A Personal Requiem," her first documentary film in 2007, but a Japanese-language series, culminating with her latest work "Long Time Passing" to be released later this month in Tokyo, highlighting how the interests of government are put ahead of humanity in times of war. 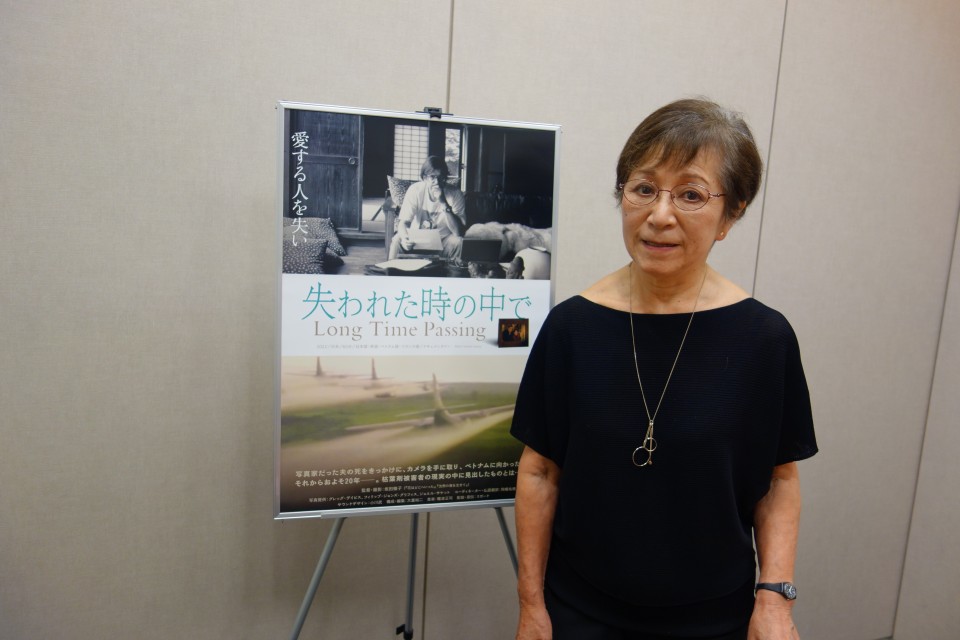 Despite Vietnam's significant economic development since Sakata began her project, the families, including children born even today with severe deformities and disabilities caused by the defoliant, have all but been left behind. Through her lens, Sakata tries to capture what the war has meant over time for the people who continue to struggle with scars that have never fully healed.

The one-hour piece depicts the daily life of Tran Thi Hoan, a young woman born without legs and one of her hands. While pregnant, her mother had been exposed to the defoliant in a field. Hoan, who graduated from university and works at a hospital, spent her childhood at a facility founded for children affected by Agent Orange.

Also featured in the film are others born with severe disabilities and their aging families who care for them in challenging, poverty-stricken rural areas. Sakata also features a court battle in France by a former journalist against U.S. chemical firms that manufactured the Agent Orange used in the war.

Sakata revisits the lives of some of the people who appeared in "Requiem," which showed the debilitating intergenerational effects of the toxic chemical on the human body, and how the Vietnamese have struggled to support victims. She has managed to keep a close relationship with many.

In 2011, she released the sequel, "Living the Silent Spring" about the dangers chemical agents pose to humanity. In it, children of U.S. Vietnam War veterans and their struggles with disability are explored.

"There are many people still suffering with various forms of hardship," said Sakata, now 74. "I wanted to show that nothing has been resolved even 60 years since the spraying (of the defoliants) began."

Millions of Vietnamese were believed to have been exposed to copious amounts of defoliants -- mainly Agent Orange -- sprayed by the U.S. military from 1961 to 1971 to destroy jungle that obscured North Vietnamese military supply lines.

Agent Orange was a toxic herbicide mixture that contained a highly poisonous chemical called dioxin. In the sprayed areas, many cases of cancer, birth defects, miscarriages and stillbirths have been observed.

Some 4.8 million Vietnamese are estimated to have been exposed to Agent Orange, while 3 million people are believed to suffer illnesses as a result, experts say. The toxic defoliant also impacted the health of U.S. servicepeople.

The U.S. government has never acknowledged its responsibility for health problems among Vietnamese people caused by the defoliants. But it does so tacitly by granting financial support to people with disabilities, while also implementing measures to clean up the environment and giving compensation to U.S. veterans.

Among other people shown in the film is Dinh Thi Huyen Tran, a junior high school student in Ninh Binh in northern Vietnam. Her grandfather was exposed to the defoliants in the country's south when he was a soldier and his four sons, including her father, have intellectual and physical disabilities. 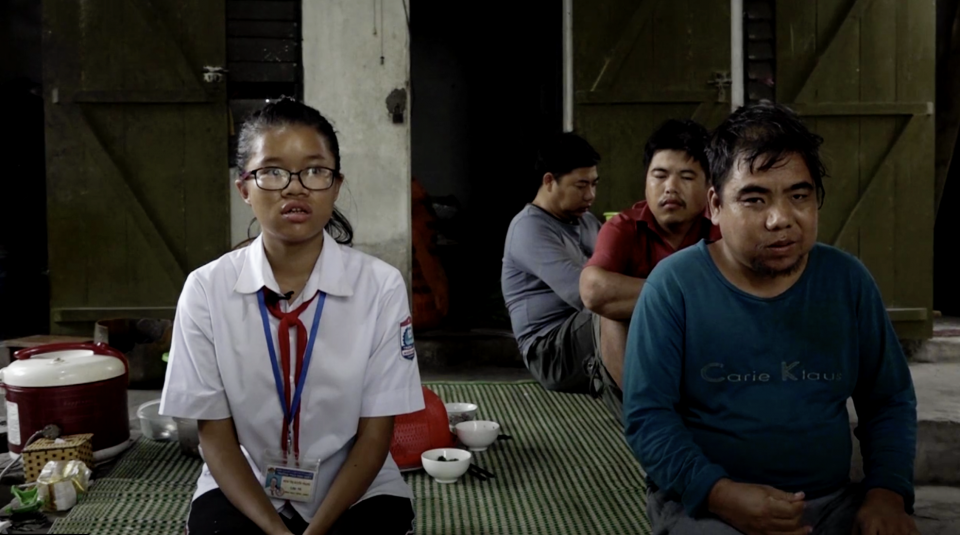 Tran must cook and clean while caring for her father and uncles with her grandmother, depriving her of valuable study time, although she is interested in working with computers and hopes to hold an office job one day. This is just one tragic example of a dream going unfulfilled, with others also shown in the film.

While many families, especially those with aging members, have a difficult time caring for disabled relatives, there have been some positive developments in recent decades, due in part to Vietnam's economic rise, Sakata said.

Although many relatives choose to be at the bedside of disabled family members until they pass away, or for as long as they are capable of caring for them, more and more facilities are accepting disabled people affected by the toxic chemical, she said.

"The burden that falls on one family has gradually been alleviated as society has started offering more assistance," Sakata said, adding the Agent Orange victims association's activities have expanded greatly. "There is hope amidst the despair."

Sakata, who has also released two documentary films about the dangers of nuclear power generation, started her career as a movie director after Davis died of cancer suddenly at the age of 54.

Davis had traveled to Vietnam often as a photojournalist, but he did not talk to Sakata in detail about the defoliant and his experiences during his service, although he appeared "very much affected and hurt by the war," she said.

"He told me that he couldn't have a child, but I never questioned him very deeply about it," she said. "After he died, I really wanted to know about the defoliant," said Sakata. 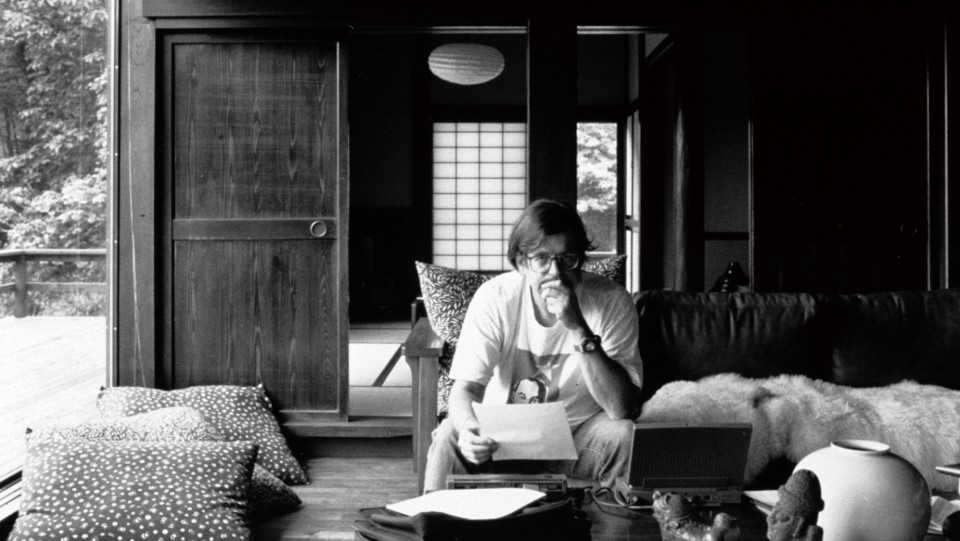 Sakata said her husband's death was "a huge part" of her life and his presence influenced her career and work thus far, as he had insisted the difficulty in capturing the lives of people lies in showing their existence leading up to and after the war.

Sakata believes that by showing the most devastated people hidden in the shadows, the roots of war and evil emerge. Once a war has started, "it never really ends," she stressed.

"I have seen individuals living in rural areas who are not usually seen, but such devastating situations are hidden in many places," she said. "By bringing those people out into the open, I thought it would help to reveal the roots of the war."

The film will open in theaters in Tokyo on Aug. 20, to be followed by releases in other parts of Japan.