A strong performance from Japan's forwards, sure tackling across the board and a brace of tries from fullback Rinka Matsuda lifted the Sakura 15 to their first win over sixth-ranked Ireland, 29-10 in Saturday's second women's international test.

World No. 13 Japan entered the clash at Prince Chichibu Memorial Rugby Ground having lost their previous six tests against Ireland, the most recent a 57-22 drubbing a week earlier in the opener of their two-test series. 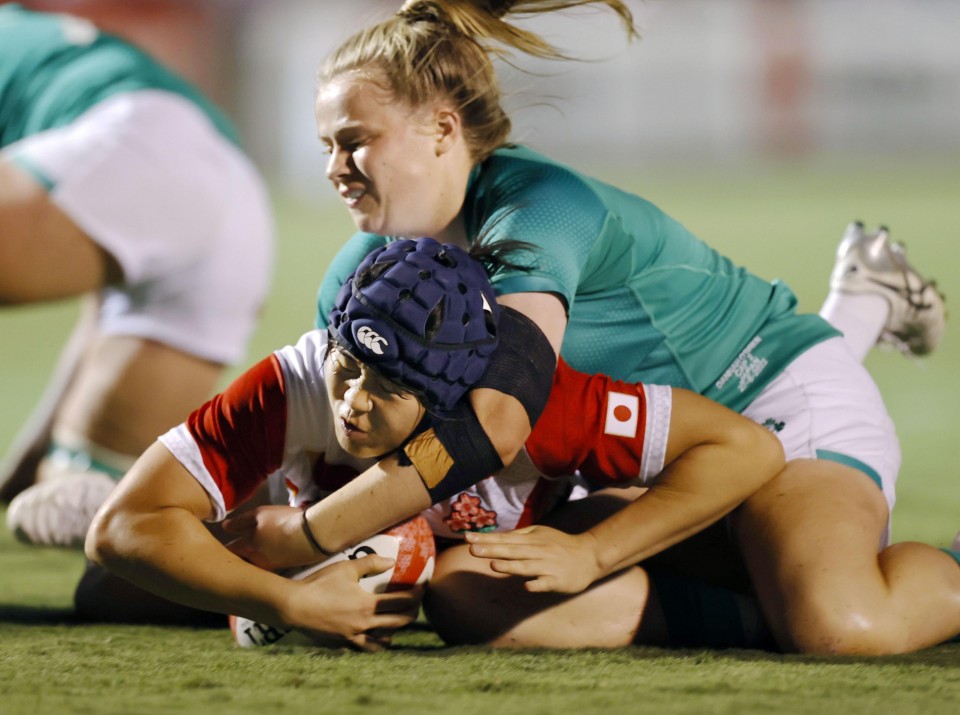 Japan's fullback Rinka Matsuda (bottom) scores a try during the first half of a women's rugby international test match against Ireland on Aug. 27, 2022, at Prince Chichibu Memorial Rugby Ground in Tokyo. (Kyodo)

On a hot and humid evening in the capital, Natasja Behan scored the visitors' opening try in the third minute, only for Japan to pull even on a five-pointer by fly-half Ayasa Otsuka.

Amid gritty defending from the hosts, Otsuka converted Matsuda's slick 34th-minute try to send Japan into the changing rooms leading 12-5.

The Japan pack set up Hinano Nagura's 49th-minute try for a 17-5 lead. Matsuda showed off her powerful running once more, shoving aside two tacklers before crossing in the 55th minute.

Replacement forward Sachiko Kato took the ball out of a try-line ruck and bulled over in the 65th minute, with Otsuka adding the extras to complete the scoring.

The series was a tune-up for the World Cup, starting in October in New Zealand.