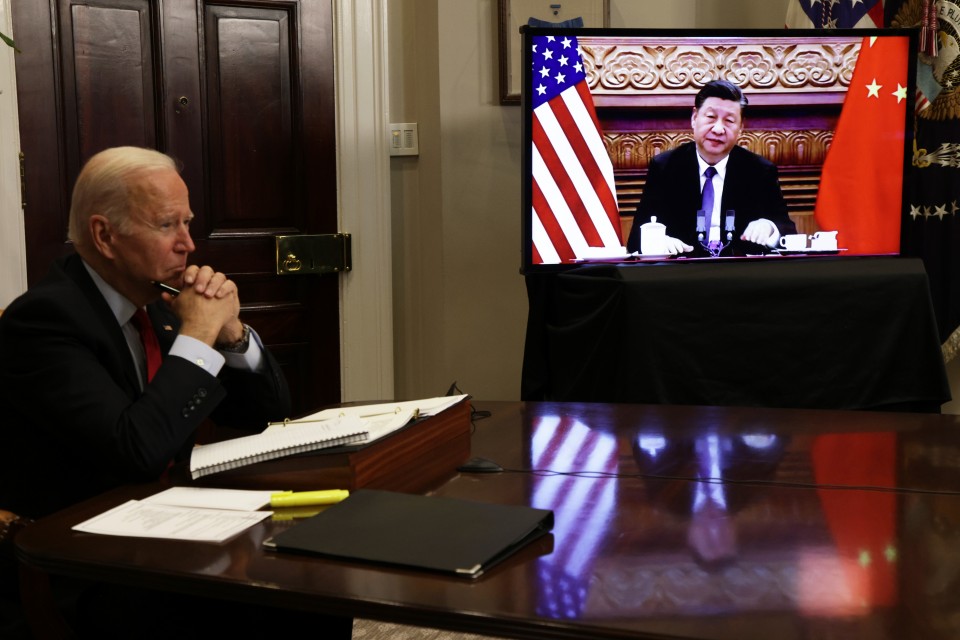 White House coordinator for the Indo-Pacific Kurt Campbell told reporters the same day that Biden and Xi had discussed a possible in-person meeting during their recent call, but added, "We don't have anything further in terms of details on time or location."

He also indicated that the Taiwan situation will remain a source of concern for the United States, warning that China is using Pelosi's visit as a pretext to "launch an intensified pressure campaign against Taiwan" that is expected to "continue to unfold in the coming weeks and months."

"The goal of this campaign is clear -- to intimidate and coerce Taiwan and undermine its resilience," the official said.

Viewing Pelosi's visit as an act that undermines its sovereignty, China has been furious over the move, responding by holding large-scale military drills in areas encircling Taiwan and cutting off some trade with the island. It also halted talks with Washington on climate change and suspended communication with U.S. military commanders.

Campbell added that the United States intends to keep lines of communication open with China, and urged Beijing to behave as a "responsible power" by reopening the channels it has closed.

If Xi travels to Southeast Asia in November, it would become his first international trip in nearly three years amid the coronavirus pandemic. The trip is expected to take place after a twice-a-decade Communist Party congress anticipated for the fall, when Xi is keen to secure an unusual third term as leader.

He will likely attend a two-day summit of leaders from the Group of 20 economies on the Indonesian island of Bali from Nov. 15, and then travel to Bangkok to attend the Asia-Pacific Economic Cooperation forum summit two days later, the newspaper said.

While the preparations are still at the early stage and could be changed, a meeting between Xi and Biden is possible on the sidelines of one of the two summits, the report said.

While warning each other over what they view as destabilizing acts regarding Taiwan, they also discussed the value of meeting face to face and agreed to have their teams follow up to find "a mutually agreeable time to do so," a senior U.S. administration official said at the time.

Since then, tensions over Taiwan have further heightened as Pelosi pushed ahead with her trip to the island, which had been postponed earlier this year after she tested positive for COVID-19.

Campbell said Friday that Beijing has "overreacted" to the trip, citing its launching of missiles into waters around Taiwan, its military planes and ships crossing the center line between China and Taiwan, and the surrounding of the island with more than a dozen warships.

"Even today, several warships remain around Taiwan," he said.

The United States will continue to take "calm and resolute steps" to uphold peace and stability in the region in the face of Beijing's ongoing efforts to undermine it, and support Taiwan in line with long-standing U.S. policy, the official said.

As the United States continues to deepen ties with Taiwan, the two economies are developing an "ambitious roadmap for trade negotiations" expected to be announced in the coming days, Campbell said.