Two Cabinet ministers visited Tokyo's war-linked Yasukuni shrine on Monday, the 77th anniversary of the end of World War II, but Prime Minister Fumio Kishida chose to send a ritual offering to the shrine seen by Asian neighbors as a symbol of Japan's past militarism.

The visits by hawkish economic security minister Sanae Takaichi and reconstruction minister Kenya Akiba, both handpicked for their posts by Kishida last week, marked the third straight year that Cabinet members have visited the Shinto shrine on Aug. 15. Yasukuni honors convicted war criminals along with more than 2.4 million war dead. 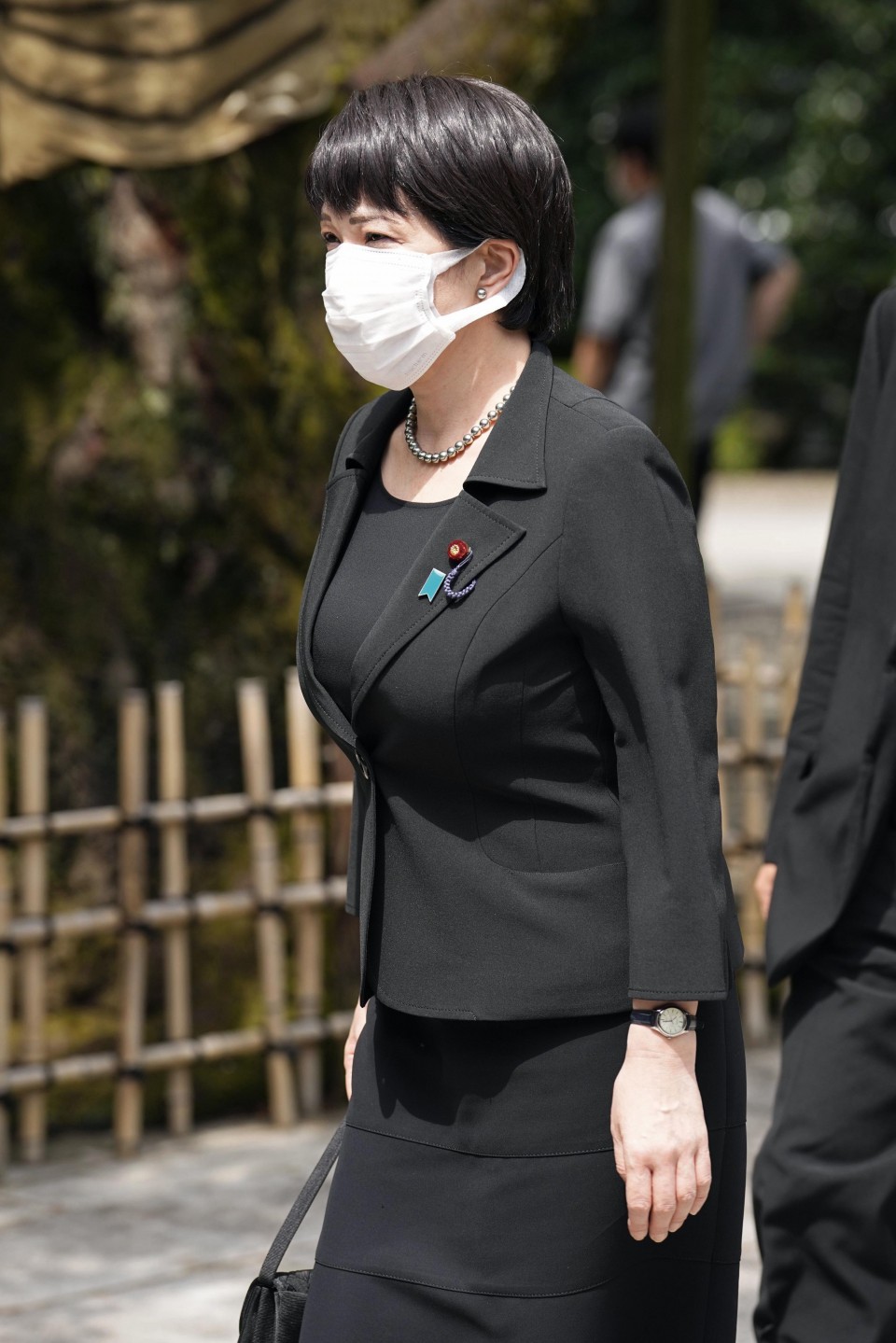 Kishida, who leads the conservative Liberal Democratic Party, sent the offering as the party's president. He has not visited the shrine, often a source of diplomatic friction, since becoming prime minister last October and sent ritual offerings for its autumn and spring festivals.

Koichi Hagiuda, the chairman of the LDP's Policy Research Council, also visited the shrine. He is a member of the LDP faction previously led by former Prime Minister Shinzo Abe, who was killed by a gunman during a campaign speech last month.

Touching on Russia's ongoing invasion of Ukraine, "I prayed here so that no more people would have to die because of war," Takaichi, known for her hawkish views shared with Abe, told reporters. She made an offering as state minister.

Akiba, who lost his grandfather in World War II, said, "I renewed my pledge never to fight a war."

Industry minister Yasutoshi Nishimura went to the shrine on Saturday. On Monday, more than 20 lawmakers such as former Environment Minister Shinjiro Koizumi, a son of former premier Junichiro Koizumi, paid a visit to the shrine.

Past visits by Japanese leaders and Cabinet members, including Abe's in 2013, angered China and South Korea, where memories of Japan's wartime actions run deep.

Japan had invaded a huge swath of China by the end of World War II, while it ruled the Korean Peninsula from 1910 to 1945. 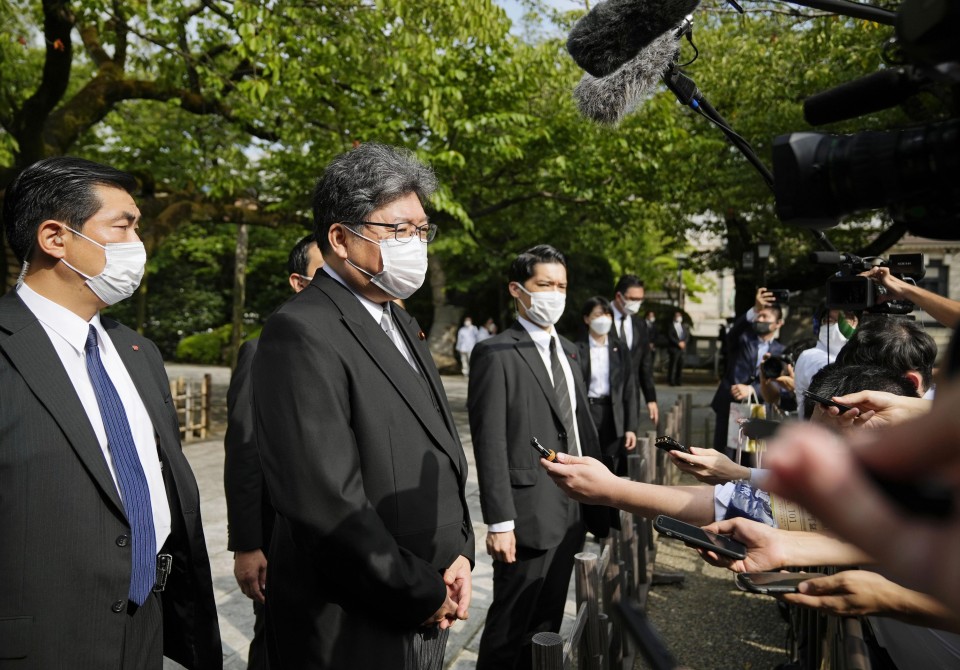 Koichi Hagiuda (2nd from L), chairman of the Policy Research Council of the ruling Liberal Democratic Party, meets the press after visiting Tokyo's Yasukuni shrine, seen by China and South Korea as a symbol of Japan's past militarism, on Aug. 15, 2022, the 77th anniversary of Japan's surrender in World War II. (Kyodo) ==Kyodo

The visit by the Japanese politicians reflects their "wrong attitude on historical issues," Wang said, adding, "Facing up to history and reflecting on itself is a prerequisite for Japan to have normal relations with its Asian neighbors."

Wang also criticized Japan for "backpedaling in history" in relation to Taiwan, claiming some Japanese politicians have acted against the 1943 Cairo Declaration, issued nearly two years before Japan's surrender in World War II.

By making reference to the Cairo Declaration, which required Japan to return all territories it had taken from China, including Taiwan, Beijing warned against Tokyo's recent involvement in the island's affairs.

Japanese Chief Cabinet Secretary Hirokazu Matsuno said at a press briefing, "In any country, it's natural to pay respects to those who lost their lives for the nation."

"There is no change in our position to strengthen ties with other nations, including our neighbors China and South Korea," he added.

This year's war anniversary comes amid heightened tensions with China over its firing of ballistic missiles during military drills that fell in Japan's exclusive economic zone. The two countries will mark the anniversary of the normalization of bilateral ties in September.

Wartime history continues to overshadow Japan's ties with South Korea, even though Kishida and his South Korean counterpart Yoon Suk Yeol are hoping to repair ties that have sunk to the lowest point under Yoon's predecessor over wartime labor issues.

A cross-party group of lawmakers has decided not to visit Yasukuni due to resurging COVID-19 cases.

In 1978, Yasukuni shrine added wartime Prime Minister Gen. Hideki Tojo and 13 other Class-A war criminals to those elevated to the status of gods, stirring controversy in Japan and abroad. 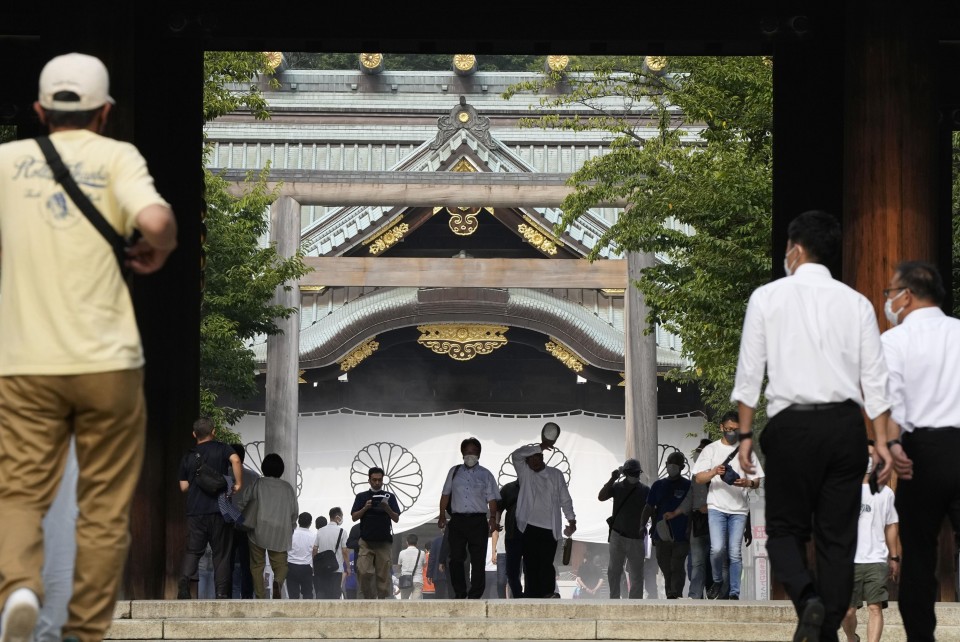 People visit Tokyo's Yasukuni shrine, seen by China and South Korea as a symbol of Japan's past militarism, on Aug. 15, 2022, the 77th anniversary of Japan's surrender in World War II. (Kyodo) ==Kyodo