Six members of two apparently unrelated families were found dead in Aichi and Saitama prefectures on Tuesday and Wednesday, with local police investigating the deaths as suspected cases of murder and family suicide, respectively.

In the central prefecture of Aichi, three members of a family were found dead -- a 9-year-old girl and her 6-year-old brother inside a station wagon, and their 42-year-old mother in their home -- with murder suspected. Police are searching for the siblings' father. 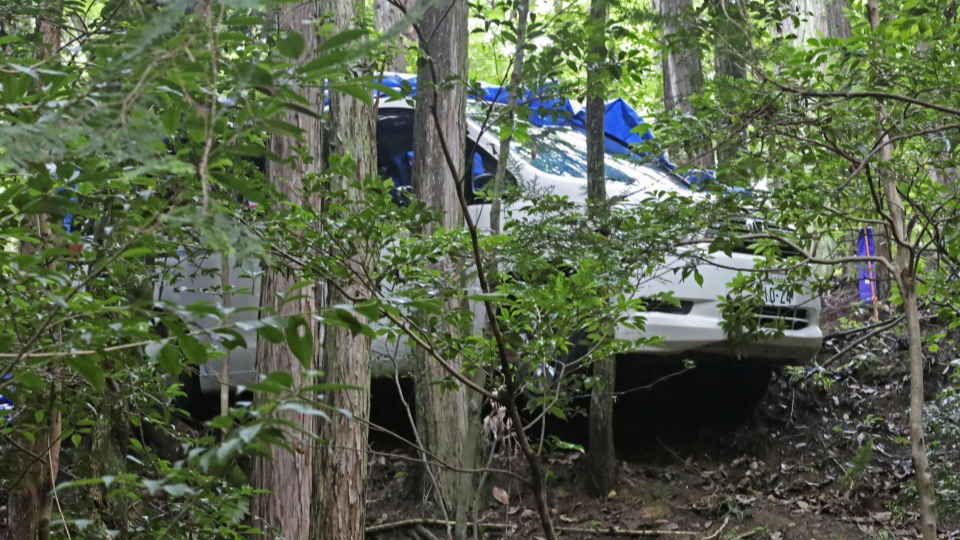 Photo taken Aug. 10, 2022, shows a station wagon in which a 9-year-old girl and her 6-year-old brother were found dead, in Inuyama, Aichi Prefecture. (Kyodo)

In Saitama Prefecture, north of Tokyo, three members of the same family found dead in their home are suspected of having committed suicide, while a fourth family member, a son of high school age, is in hospital with serious wounds.

In the Aichi case, a police officer found the bodies of the children covered with blankets in the station wagon after responding to an emergency call from a passer-by around 5:20 p.m. Tuesday reporting that "a car was about to go off a cliff" in Inuyama.

The bodies were later identified as those of Chiyu Tanaka and her younger brother Tora, investigative sources said.

In Saitama, police have yet to confirm the identities of the three people found dead in a house in Kawajima around 2:05 a.m. Wednesday, but they are believed to be a couple in their 40s and their daughter of grade-school age.

Police searched the house following an emergency call late Tuesday night from a male acquaintance of the couple, saying he had been "unable to contact them and visited their home, but there was no sign of anyone."

When police and firefighters broke a window to enter the two-story house, which was locked, they found four people lying inside with external injuries and bleeding heavily, police said.