A month-long international conference on nuclear nonproliferation that began Monday in New York is once again facing challenges in charting a path toward its goals as the international security environment has become even more unsettled since the previous meeting in 2015 especially after Russia's invasion of Ukraine.

In a speech on the first day of the review conference of the Treaty on the Non-Proliferation of Nuclear Weapons held at the U.N. headquarters, Japanese Prime Minister Fumio Kishida unveiled an action plan as "the first step of a realistic road map" to the treaty's final goal of achieving nuclear disarmament. 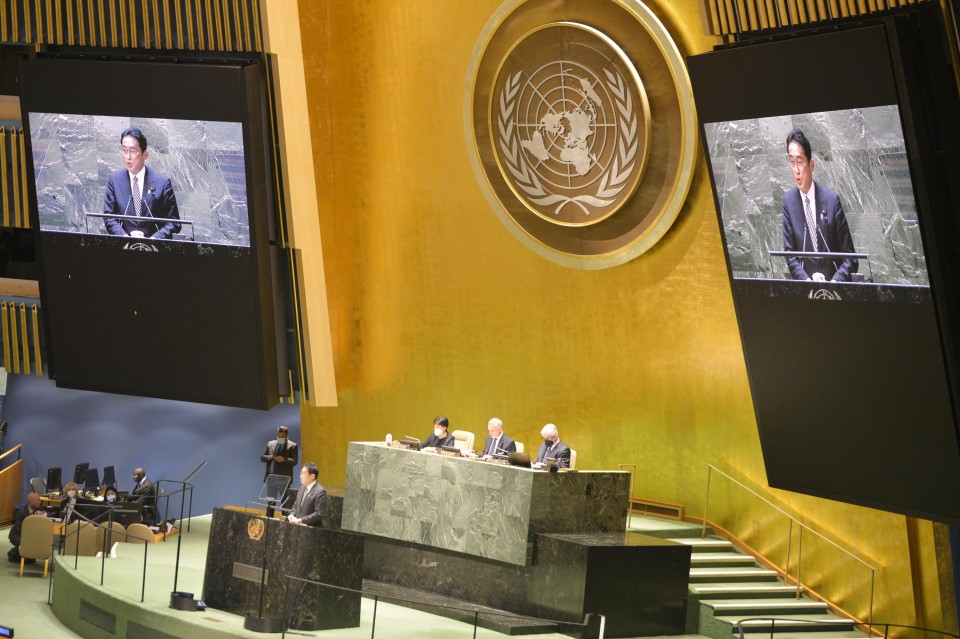 Japanese Prime Minister Fumio Kishida gives a speech on the first day of a review conference of the Treaty on the Non-Proliferation of Nuclear Weapons at the U.N. headquarters in New York on Aug. 1, 2022. (Kyodo)

His plan includes a call on nuclear powers to enhance the transparency of their arms and the creation of a fund to help young people visit the two atomic-bombed Japanese cities of Hiroshima and Nagasaki to learn about the realities of nuclear devastation.

But encouraging nuclear powers to push their disarmament commitment forward and restoring the credibility of the global regime remains a difficult task after the previous meeting in 2015 fell apart due partly to wrangling over issues surrounding the disarmament of a non-member nuclear state Israel and a U.S.-Russia row over Moscow's Crimea annexation.

Mitsuru Kurosawa, a professor emeritus at Osaka University well-versed in disarmament issues, says the review conference through Aug. 26 faces two major hurdles -- deteriorated relations between the world's two biggest nuclear powers of the United States and Russia, and the continued polarization within nuclear and non-nuclear members over the approach toward nuclear disarmament.

It will likely be even harder for the NPT members to find common ground than at any of the past nine gatherings of the treaty, which entered into force in 1970, with the conference "expected to close without adopting" a substantive consensus document, like the previous talks in 2015, he said.

The treaty, adopted at the height of the Cold War, had contributed significantly to limiting nuclear proliferation, but the latest meeting comes at a time when Russia's war on Ukraine and China's military modernization have highlighted the diverging priorities of the major nuclear powers in their nuclear disarmament commitment, leading to worsening U.S.-Russia and U.S.-China ties.

Among other troubling developments in recent years that could further destabilize the security environment, the United States withdrew from the Iran nuclear deal and North Korea has expanded its nuclear capabilities.

The Treaty on the Prohibition of Nuclear Weapons, a separate treaty banning nuclear arms that took effect in January last year, mirrored the division over the approach toward disarmament, with none of the major nuclear-armed states taking part.

The NPT is the world's most widely ratified nuclear arms control agreement featuring about 190 nations, including the five recognized nuclear powers of Britain, China, France, Russia and the United States.

The NPT meeting had been held every five years from 1975 to 2015. The upcoming gathering was originally scheduled in 2020, but pushed back repeatedly due to the coronavirus pandemic.

The talks come as Russia has threatened to use nuclear weapons in its war against its neighbor that began in late February, leading to severe economic sanctions from the United States and its allies including Japan.

"Negotiations over nuclear disarmament require a relationship of mutual trust to some extent, but now there is no longer such a relationship between them" amid the Ukraine war, said Kurosawa.

Born of frustrations among non-nuclear states regarding the lack of disarmament progress, the TPNW is the first international treaty outlawing the development, testing, possession and use of nuclear weapons. But the five nuclear powers see it as ignoring the reality of the global security environment.

At their first meeting held in Vienna in late June, parties to the TPNW called for "immediate action" to achieve a nuclear-free world.

The participants including 65 nations and regions that had ratified the TPNW at that time, however, did not mention Russia by name in reference to its threat to use nuclear weapons, which was "enormously disappointing," said Heigo Sato, a professor at Takushoku University in Tokyo.

"After all, it showed that momentum for nuclear disarmament is easily slowed by the political motives of some nations that want to maintain relations with Russia," he said.

But Sato, an expert in international relations, said the NPT meeting could put member states on a good footing for the next review cycle if the five major nuclear nations confirm the consensus showed in their joint statement issued in Januarnuy that said they "affirm that a nuclear war cannot be won and must never be fought."

The statement was issued shortly after the NPT review meeting in January was postponed.

It is "quite possible" for the five nations to do so since it would benefit Moscow, which wants to avoid a nuclear war with Washington, Sato said.

Sato added, however, that, despite the two-year postponement, the current review cycle should be kept and the next meeting should be held in 2025 instead of 2027 to maintain any positive momentum created by the latest gathering.

Kishida, who represents a constituency in Hiroshima, could play a role in reviving the NPT regime, experts say.

With Japan hosting the Group of Seven summit in Hiroshima in May next year, Kishida has an opportunity to have the leaders of the nuclear powers learn more about the devastation of atomic bombings and listen to the voices of surviving victims, Kurosawa said.

Sato says Kishida needs to show his determination to facilitate progress in the pursuit of nuclear disarmament if he aspires to become a bridge builder between nuclear and non-nuclear states.

"He has not yet explained to the public why he wanted to attend the NPT himself and host the G-7 summit in Hiroshima" as a way to achieve nuclear arms reduction, Sato said.