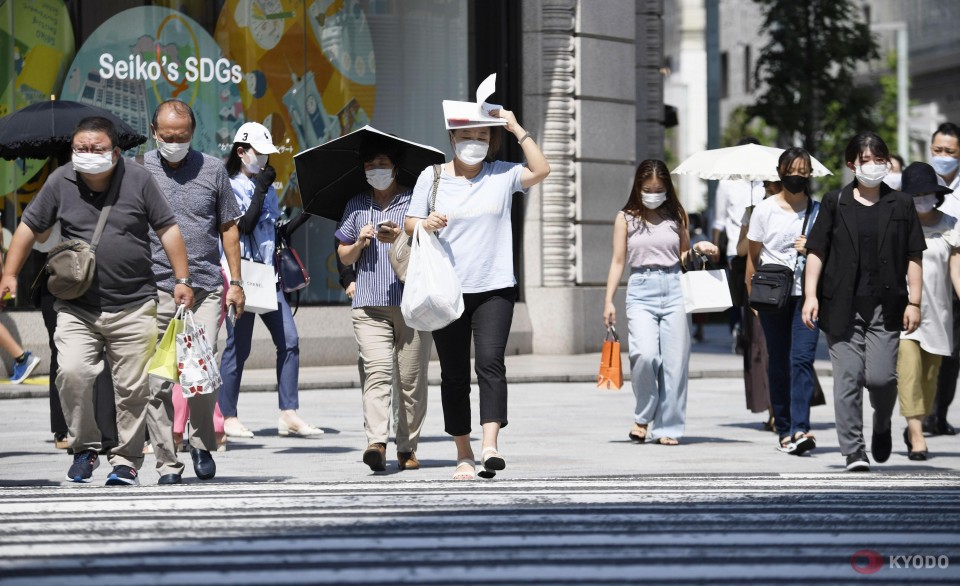 People wearing face masks for protection against COVID-19 walk under the scorching sun in Tokyo on Aug. 9, 2022. (Kyodo) ==Kyodo

Kishida hopes the renewal will pave the way for a long-term, stable administration to tackle what he has described as "the biggest challenges of the postwar era," ranging from COVID-19 and inflation to Russia's war in Ukraine and heightened tensions across the Taiwan Strait.

BEIJING - China's military on Wednesday announced the completion of its exercises in areas encircling Taiwan that began last week in response to U.S. House of Representatives Speaker Nancy Pelosi's visit to the self-ruled democratic island.

The Eastern Theater Command of the People's Liberation Army said in a statement it will continue to monitor any changes in the Taiwan Strait and regularly conduct patrols in the waters, fueling speculation that Beijing may be seeking to normalize its military pressure in the area.

TOKYO - Japanese Prime Minister Fumio Kishida said Wednesday the door is "always open" for dialogue with China, stressing the need to have "constructive and stable" bilateral relations despite persisting difficulties.

Still, Kishida told a press conference that there are no plans for a meeting with Chinese President Xi Jinping, after China's firing of ballistic missiles last week into Japan's exclusive economic zone.

OAKLAND, California - Shohei Ohtani won his 10th game on Tuesday, making him the first player with double-digit home runs as a batter and wins as a pitcher in a single Major League Baseball season since Hall of Famer Babe Ruth in 1918.

Ohtani (10-7) struck out five over six innings for the Los Angeles Angels in their 5-1 victory over the Oakland Athletics at Oakland Coliseum.

TOKYO - Opposition parties on Wednesday criticized Prime Minister Fumio Kishida's reshuffle of his Cabinet and Liberal Democratic Party executives, accusing him of trying to divert the public's attention from questionable ties between some LDP lawmakers and a religious group known as the Unification Church.

Seiji Osaka, acting leader of the main opposition Constitutional Democratic Party of Japan, said the Cabinet reshuffle is merely procrastinating instead of addressing issues involving the group, which calls itself the Family Federation for World Peace and Unification.

WASHINGTON - U.S. President Joe Biden on Tuesday signed into law a bill that invests $52.7 billion in semiconductor production and development in a bid to secure a technological edge amid intensifying competition with China.

The enactment of the law, which includes $39 billion in manufacturing incentives, also comes as the United States is accelerating cooperation with Japan, a key security ally, to build resilient semiconductor supply chains that rely less on potential adversaries.

BEIJING - China on Wednesday criticized the United States for deepening ties with Taiwan and stressed it will not renounce the use of force to achieve reunification in a new white paper on the self-ruled island.

The report, which was preceded by earlier editions released in 1993 and 2000, emphasized Beijing's claim to Taiwan and demonstrated its resolve and commitment to national reunification, according to the state-run Xinhua News Agency.

OSAKA - Japanese pharmaceutical firm Shionogi & Co. said Wednesday its oral COVID-19 drug currently under development has been confirmed in preclinical testing as effective against the Omicron subvariant BA.2.75 that has been detected in Japan.

The announcement came after a health ministry panel in July postponed the granting of emergency approval for the drug. Discussions are slated to resume after the results of the final stage of clinical trials currently under way