Russian President Vladimir Putin's threat to use nuclear weapons in the war against Ukraine has opened the eyes of a Ukrainian woman living in Hiroshima to the horrors of nuclear warfare, pushing her to take a stand in solidarity with her compatriots.

In March, a group of Ukrainians staged a protest against the Russian invasion in front of the Atomic Bomb Dome, the skeletal remains of a building preserved as a memorial after the August 1945 atomic bombing of the western Japan city.

The protest drew about 120 Ukrainians and Japanese living in Hiroshima Prefecture. They chanted "Stop the war," and held up signs reading "STOP PUTIN" over the blue-and-yellow Ukrainian flag. 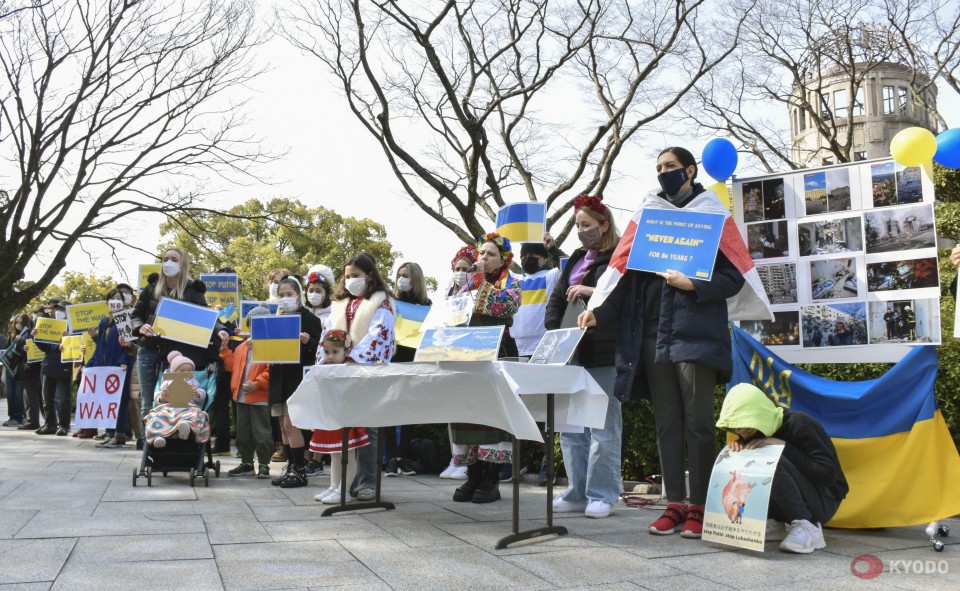 Ukrainian people, including Yuliya Taniguchi, protest against Russia's invasion of their country in front of the Atomic Bomb Dome in Hiroshima on March 5, 2022. (Kyodo)

It was Yuliya Taniguchi's first time to take part in any kind of demonstration, reflecting how Putin's threats to go nuclear had affected her.

Originally from Poltava in central Ukraine but a resident of Hiroshima for about 15 years after marrying a Japanese, the 45-year-old learned in school about the nuclear attack on Japan by the United States in World War II, and had occasionally talked about it with friends in her new home.

"It is unforgivable that Putin said things for the sake of nuclear saber-rattling so casually," Taniguchi said in an interview. 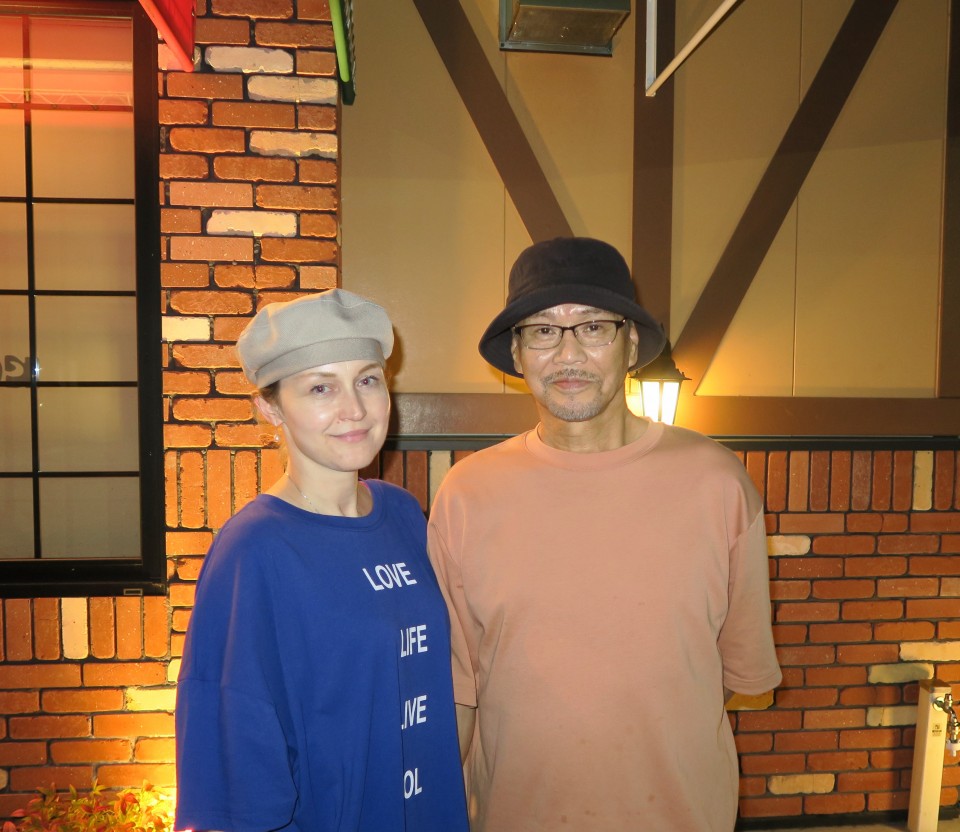 Yuliya Taniguchi (L) and her husband Hiroaki Taniguchi pose for a photo in Higashihiroshima, Hiroshima Prefecture, on July 20, 2022. (Kyodo)

In launching an attack on Ukraine, Putin reminded the world that Russia remains one of the most powerful nuclear states, saying there should be no doubt that "any potential aggressor will face defeat and ominous consequences should it directly attack our country."

After the invasion, Taniguchi experienced insomnia and lost her appetite as she read about the experiences of her compatriots and the devastation caused by the Russian aggression.

"I thought about what I could do myself. I wanted to talk to someone who felt the same way I did. That is why I joined the protest."

Since the invasion, the Ukrainian group has held numerous protests near the Atomic Bomb Dome, which sits next to the Peace Memorial Park, where a city-organized ceremony commemorating the atomic bombing is held every August.

The group has also solicited donations for Ukrainian refugees. With the help of the city government, donation boxes were set up in City Hall and other related places.

Taniguchi says the world should open its eyes wider to the horrors of nuclear weapons and, as a step toward nuclear disarmament, give greater backing to the Treaty on the Prohibition of Nuclear Weapons, a U.N. pact that bans the development, testing, possession, and use of nuclear arsenals that went into force in 2021. 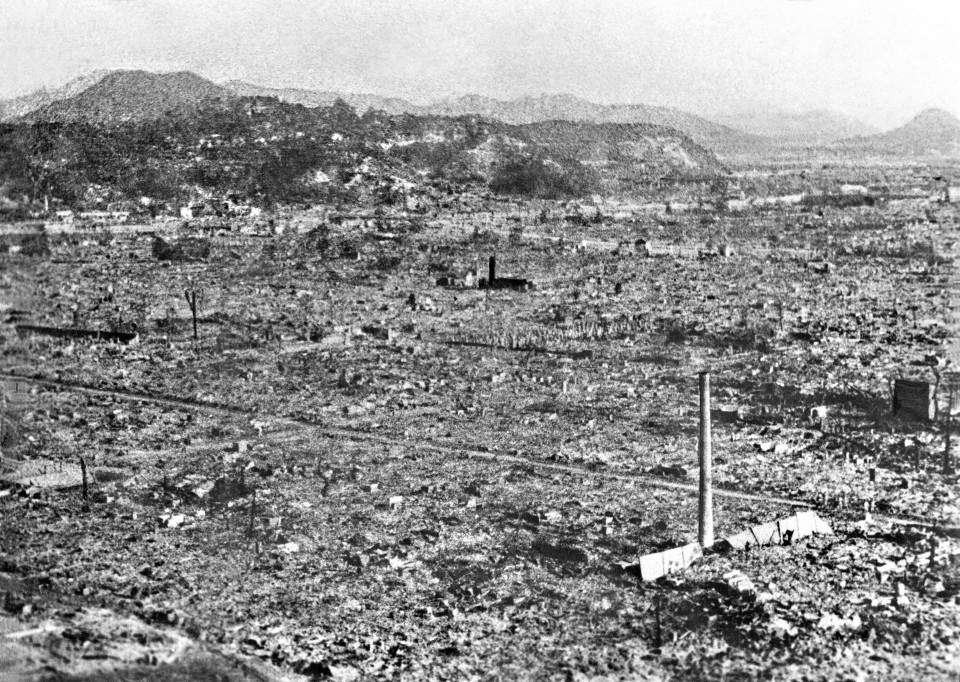 File photo shows the city of Hiroshima after an atomic bomb was dropped in August 1945. (Kyodo)

Japan and other countries that rely on the U.S. nuclear umbrella to deter nuclear attacks against them have ruled out joining the treaty, as have countries with nuclear weapons such as the United States and Russia.

The Russian aggression and nuclear threats prompted her to visit the Hiroshima Peace Memorial Museum in the park, where visitors can learn about the horrors of the bombing and its aftereffects, including through a collection of personal items from atomic bomb victims.

Taniguchi vividly remembers the 1986 Chernobyl disaster, the world's worst nuclear accident, which occurred when she was around 10.

She and her family feared being exposed to radiation and she blames radiation exposure for a disability suffered by one of her relatives who was involved in the cleanup at the site.

"That kind of tragedy should never occur again," she said.

Meanwhile, the war has also cast a shadow over relationships Taniguchi had with Russians and Belarussians she met in Hiroshima. Belarus has been a key supporter of Putin's invasion.

An annual camping trip Taniguchi's family has made with friends from Belarus and Ukraine will not happen this year, she said.

One of her best friends, who moved back to Russia a decade ago, left Taniguchi in shock when she said in a call that Putin was doing the right thing.

Taniguchi's cousin in Ukraine is currently fighting against Russia, while her male friends back home are also helping the country fight as volunteers.

Taniguchi's husband Hiroaki says he encourages her to be courageous like the Ukrainian men fighting for their country.

He says they have recently been in contact with Ukrainians forced to leave their homeland who have come to Hiroshima and have already been talking with three of them.

"I have told them that if they need anything, we are here to support them," she said, while the husband said, "I want to do what I can as a Japanese to the extent that I can."