The families of victims of the 1985 Japan Airlines plane crash on a mountain north of Tokyo that claimed 520 lives offered prayers on Friday, though the number climbing the steep trail to pay their respects at the site is on the decline as the relatives age.

The relatives laid flowers at grave markers for their lost loved ones on the mountain and offered silent prayers at a monument built at the 1,540-meter crash site. The sound of a bell rang out as they pressed their hands together. 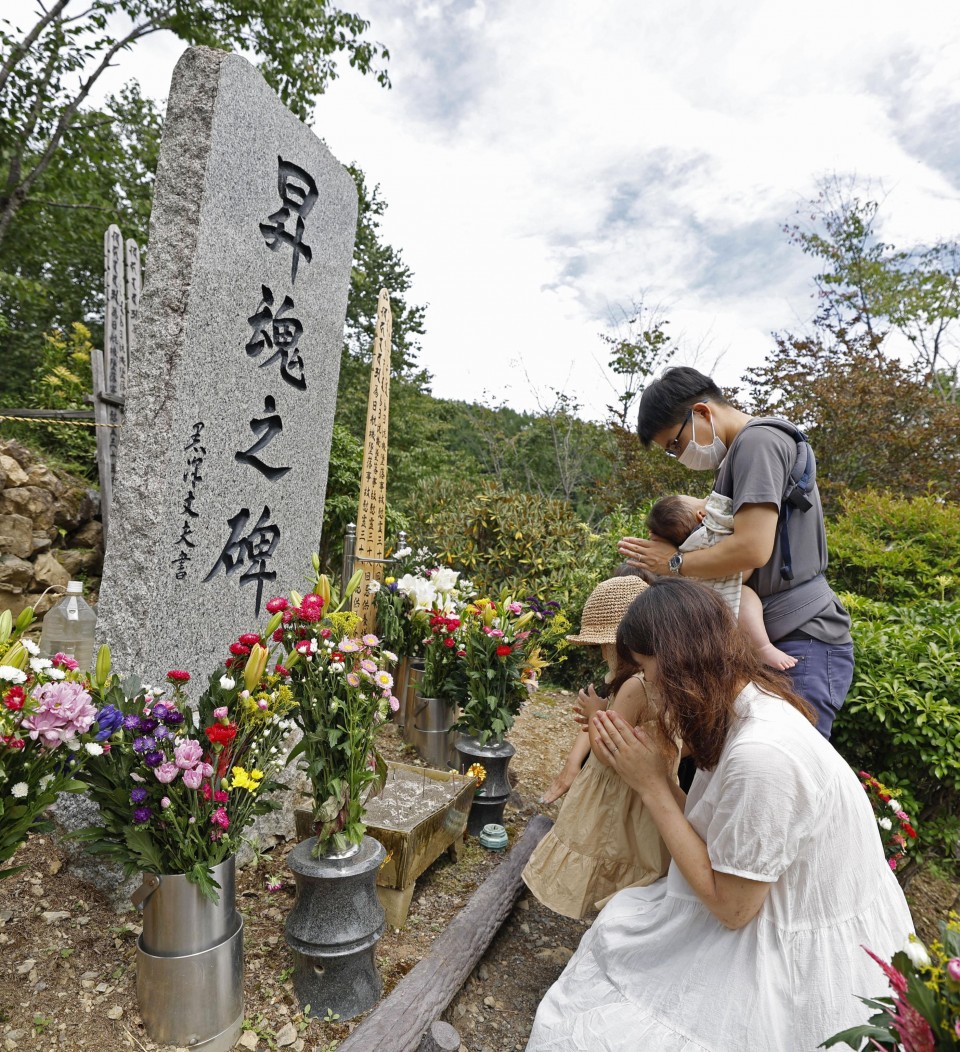 People pray at a monument dedicated to the victims of the 1985 Japan Airlines jet crash on Osutaka Ridge in the Gunma Prefecture village of Ueno, eastern Japan, on Aug. 12, 2022, the 37th anniversary of the accident that claimed the lives of 520 crew and passengers. (Kyodo) ==Kyodo

Kuniko Miyajima, 75, who lost her 9-year-old son Ken, was among the family members who visited the village in the sweltering summer heat to make the annual trek.

"Telling the world about our desire never to let such a thing happen again is a job that Ken left me," said Miyajima, who heads a bereaved families group.

According to JAL, 150 people from 49 families joined the annual hike this year. JAL President Yuji Akasaka also offered his prayers at the monument, it said.

"Most of our employees now are those who came after the accident. We would like to pass on the lessons learned to them," he said.

In the evening, a memorial service was held with candles for each departed soul alight, with a moment of silence observed at 6:56 p.m., the time of the crash.

The number of attendees was limited to around 20 people due to the pandemic, including JAL and municipality officials.

On Aug. 12, 1985, Boeing 747 Flight 123, en route from Tokyo's Haneda to Osaka's Itami airport with 524 passengers and crew, crashed about 40 minutes after takeoff. Only four survived the crash, making it the world's deadliest single-aircraft accident. 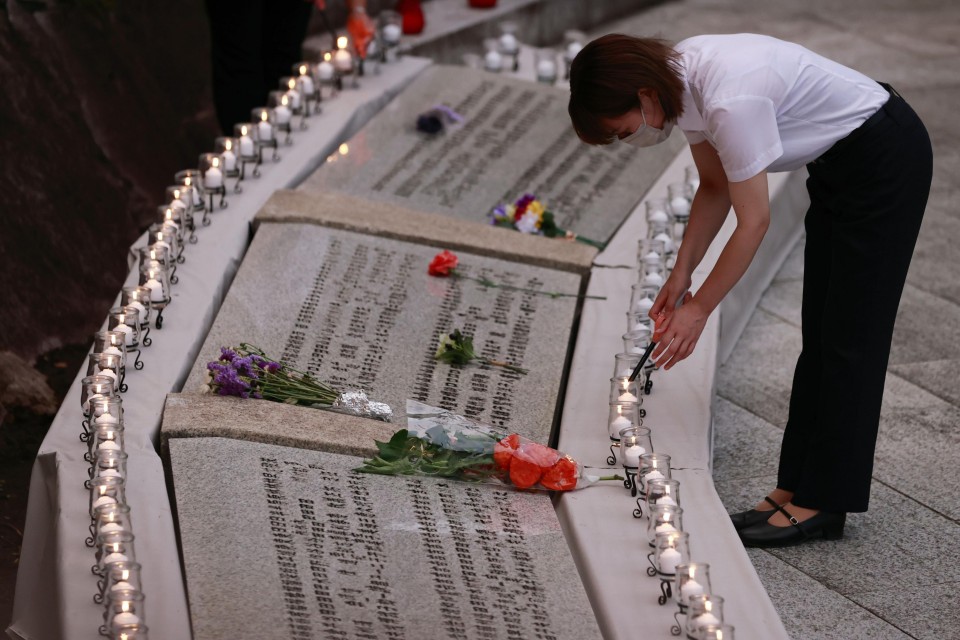 A woman lights candles in the Gunma Prefecture village of Ueno, eastern Japan, on Aug. 12, 2022, the 37th anniversary of the 1985 Japan Airlines jet crash on Osutaka Ridge that claimed the lives of 520 crew and passengers. (Kyodo) ==Kyodo

Many of the passengers were on their way home to see their families during Japan's Bon summer holiday season. The dead included 43-year-old singer Kyu Sakamoto, known for his smash-hit song "Sukiyaki."

Ryosuke Ishikura, a 51-year-old resident of Hadano, Kanagawa Prefecture, who lost his father Rokuro in the accident, said he has visited the crash site every year with his relatives.

"This time of the year has given my family and our relatives a reason to get together. Even a newborn baby joined us," Ishikura said, adding he hopes to hand down his experiences and the lessons learned to future generations.

Kimiko Yoshida, 88, who lost her 24-year-old actress daughter Yumiko, has decided to commemorate her death at her grave in Tokyo this year instead of participating in the trek as it had become more physically demanding every year.

The mother also said that this way, she can thank her daughter's friends and fans who visit her grave each anniversary and pray together with them. "I don't have any regrets about not climbing the trail this year," she said.

In 1987, a Japanese government investigation commission concluded that the accident was caused by improper repairs conducted by Boeing Co. on the plane's rear pressure bulkhead. Its rupture blew off the aircraft's vertical stabilizer and destroyed its hydraulics.

Japanese police referred to prosecutors 20 people, including Boeing and JAL employees, for their alleged negligence in 1988, but none were indicted after their probe ran out of steam with the aerospace giant refusing to cooperate.

A 78-year-old former JAL mechanic, who was climbing the mountain Friday, said he has been helping maintain the trail since the year after the tragedy.

"People have thrown harsh words at me sometimes," he said. "But it's only natural. It's part of my life."