Taiwan on Thursday earmarked a record annual NT$586 billion (US$19.4 billion) for its defense budget in the new fiscal year starting in January, amid China's growing assertiveness in the Asia-Pacific region and heightened cross-strait tensions.

The Executive Yuan, or Cabinet, approved a general budget of NT$2.71 trillion for fiscal 2023, a 20 percent increase from a year earlier. Of that amount, NT$586.3 billion has been requested by the Defense Ministry, up about 14 percent, or NT$70 billion, from the current year.

The proposed budget comes as China has been ramping up military pressure on Taiwan, following U.S. House Speaker Nancy Pelosi's visit to the island earlier this month, which triggered large-scale live-fire military drills by China around Taiwan.

Military spending topped NT$300 billion in 2012, with this year marking the highest amount of NT$372.6 billion. 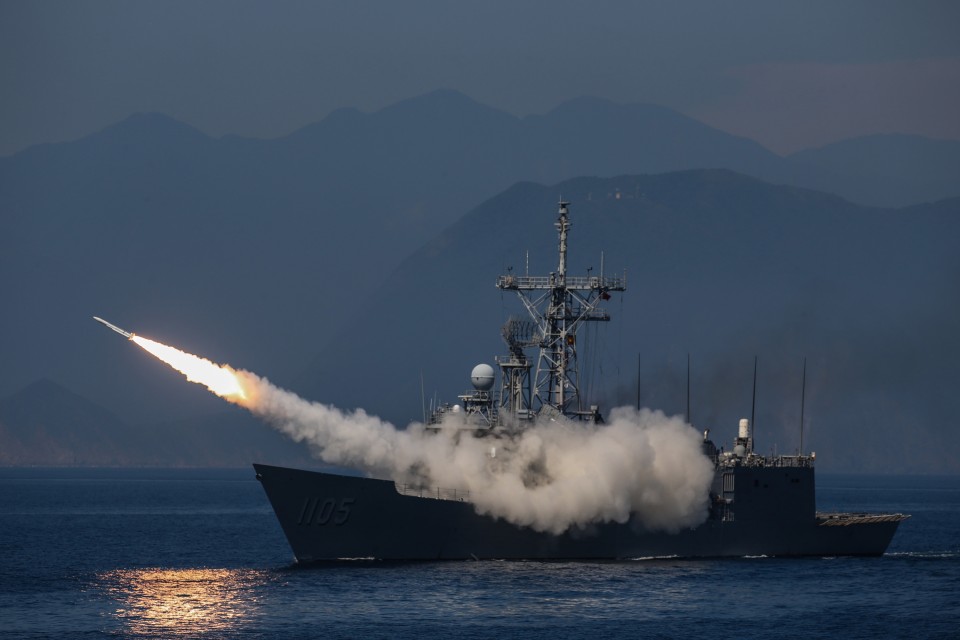 A naval vessel launches a missile during a military drill off the coast of Yilan County, northern Taiwan on July 26, 2022. (Central News Agency/Kyodo)

When the special budget and other expenditures were factored in, the overall budget came to about NT$500 billion this year, equivalent to around 2 percent of gross national product.

Former U.S. Secretary of Defense Mark Esper urged Taiwan last month to significantly increase defense spending to a level matching that of the United States at around 3.2 percent of annual gross domestic product, to "send a very powerful message about the seriousness of Taiwan's commitment."

The Cabinet's budget request will be reviewed by the Legislative Yuan, Taiwan's parliament, which can only trim it. If approved, it would be the largest percentage increase in military spending since President Tsai Ing-wen first assumed office in May 2016.

Increasing military spending is the policy of Tsai's independence-leaning DPP government, as Taiwan lives under the constant threat of an invasion by Communist-led China.

Taiwan and China have been governed separately since they split during a civil war in 1949. Beijing, which regards Taiwan as a renegade province, has endeavored since then to bring the self-ruled democratic island into its fold, by force if necessary.

Tsai promised in October 2017 to boost future military spending annually by 2 percent from the previous year after the U.S. government called on Taipei to invest more on the island's self-defense.

Instead of engaging in an arms race with Beijing, the Tsai administration in that year adopted a new approach called the overall defense concept, which employs an asymmetric strategy, or warfare involving forces of unequal capabilities.

The idea is not to compete with China's large military head-on but to maximize Taiwan's defense advantages and focus on the greatest threats, while surviving long enough for third-party intervention.