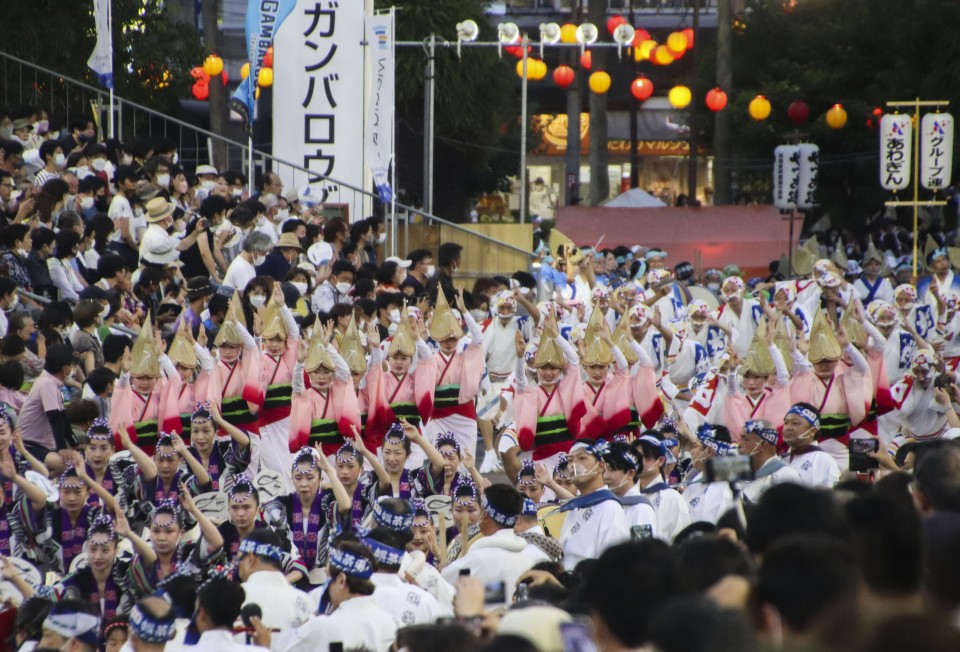 The four-day Awa dance festival begins in Tokushima, western Japan, on Aug. 12, 2022, the first time in three years that the traditional festival has had spectators in the outdoor stands amid the coronavirus pandemic. (Kyodo) ==Kyodo

TOKYO - Typhoon Meari made landfall on the Izu Peninsula on Japan's Pacific coast close to Tokyo on Saturday, causing disruption to the roads and train and air services during the peak summer holiday season, the weather agency said.

The agency has warned of disasters including potential landslides, flooding in low-lying areas, overflowing rivers, strong winds and high waves, especially in the central Japan Tokai region, including Shizuoka Prefecture, where the typhoon made landfall at about 5:30 p.m.

The visit to the Shinto shrine, which honors convicted war criminals along with more than 2.4 million war dead, came ahead of the 77th anniversary of Japan's surrender in World War II on Monday. He is the first minister known to have visited the shrine since Prime Minister Fumio Kishida's government was launched in October last year.

TOKYO - The Japanese government plans to keep unchanged the average price at which it sells imported wheat to milling companies from October onward despite soaring inflation, an official with knowledge of the matter said Saturday.

The plan is aimed at easing the burden on households suffering from higher prices of wheat products such as bread and noodles on the back of Russia's invasion of Ukraine. Both countries are leading producers of wheat.

NEW YORK - Indian-born author Salman Rushdie, who wrote the controversial 1988 novel "The Satanic Verses," was seriously injured Friday when he was attacked by a man in New York state, local media reported.

The 75-year-old novelist was stabbed multiple times including in the neck and suffered significant blood loss as he was about to give a lecture, according to the media reports.

WASHINGTON - The recent trip to Taiwan by U.S. House of Representatives Speaker Nancy Pelosi was necessary to avoid setting a "new precedent" that Beijing has a say over such visits, a congressman who accompanied Pelosi to the self-ruled island has said.

Countering China's argument that the visit was a provocation, House member Mark Takano told Kyodo News in a phone interview on Thursday, "If you accept that this was a provocation, you're accepting the premise that the Chinese had a right to object to the speaker or any member of Congress' intention to visit Taiwan."

WASHINGTON - The FBI has collected over 10 sets of classified documents from former President Donald Trump's Mar-a-Lago resort in Florida, including some categorized as "top secret," according to court papers released Friday.

Trump, whose presidency ended in January 2021, is facing questions over sensitive documents he took from the White House. The court papers showed that the search by the Federal Bureau of Investigation was linked to allegations including violation of the Espionage Act.