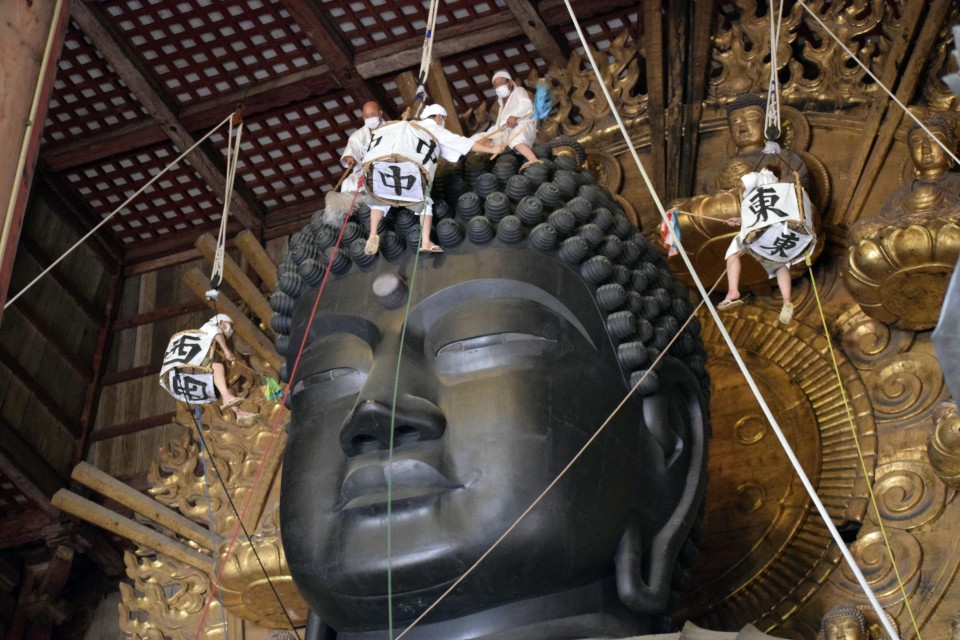 Monks wearing white clean the Great Buddha at Todaiji temple in the ancient Japanese capital of Nara, western Japan, on Aug. 7, 2022, in an annual "ominugui" cleaning event, which resumed after a two-year hiatus due to the COVID-19 pandemic. (Kyodo) ==Kyodo

BEIJING - China continued Monday its military drills near Taiwan launched in response to U.S. House of Representatives Speaker Nancy Pelosi's visit to the island last week, keeping cross-strait tensions high and raising fears it may be seeking to normalize its military pressure in the area.

The large-scale exercises, dubbed by local media as "Taiwan lockdown" drills, have been conducted since Thursday in six locations encircling the self-ruled democratic island. They have involved ballistic missile launches and the crossing of the median line in the Taiwan Strait by Chinese warplanes and naval vessels.

TOKYO - SoftBank Group Corp. on Monday reported a record net loss of 3.16 trillion yen ($23.4 billion) in the April-June quarter, the largest quarterly loss ever by a Japanese company, after its Vision Fund sustained hefty losses amid the global market slump.

The result follows a net loss of 2.1 trillion in the three months ended March and is a sharp turnaround from the 761.51 billion yen in profit in the same quarter last year.

During their meeting in Tokyo, Hayashi and Guterres also agreed on the importance of easing tensions, according to the Japanese Foreign Ministry, with Beijing having commenced the exercises Thursday in response to U.S. House Speaker Nancy Pelosi's visit to the self-ruled democratic island last week.

TOKYO - A new COVID-19 vaccine considered effective against the Omicron variant will be available to all people who have completed at least two inoculations from as early as mid-October, the Japanese government said Monday.

The bivalent vaccine, so named for its combination of ingredients deriving from existing COVID-19 shots and from the Omicron variant's BA.1 subtype, has been reported to provide some increase in neutralizing antibodies against the BA.5 subtype currently prevalent across the country.

SYDNEY - A member of Japan's Maritime Self-Defense Force was stabbed Monday at a commemoration service marking the 80th anniversary of the World War II Battle of Guadalcanal in the Solomon Islands capital Honiara.

The Japanese sailor suffered a minor injury to the neck after he was approached from behind by a local man and stabbed with what appeared to be a pair of scissors, according to the Japanese Embassy in the Solomon Islands.

TOKYO - Japan's current account surplus shrank 63.1 percent in the first half of 2022 from a year earlier to 3.51 trillion yen ($25.9 billion), the lowest in eight years due to a major goods trade deficit stemming largely from a higher oil price and the weak yen, the Finance Ministry said Monday.

The surplus in the current account balance, one of the widest gauges of international trade, fell to the lowest level since it sank into the red in the first half of 2014, according to the ministry's preliminary report.

NAGOYA - The sisters of a Sri Lankan woman who died last year while being detained at an immigration center in Nagoya filed a complaint Monday with a judicial panel to seek a review of prosecutors' decision not to bring charges in the case.

The move came after the Nagoya District Public Prosecutors Office decided in June not to prosecute 13 officers at the facility, including its director at the time, over Ratnayake Liyanage Wishma Sandamali's death on March 6, 2021.

TOKYO - Testing of fertilized eggs that undergo in-vitro fertilization treatment to identify genetic diseases before pregnancy has reduced the rate of miscarriages in women who had repeatedly miscarried, a large-scale clinical trial has found.

The Japan Society of Obstetrics and Gynecology, which analyzed the clinical trial covering 9,097 people at 200 facilities, concluded the method proved to be effective in reducing the miscarriage rate in results released Sunday.