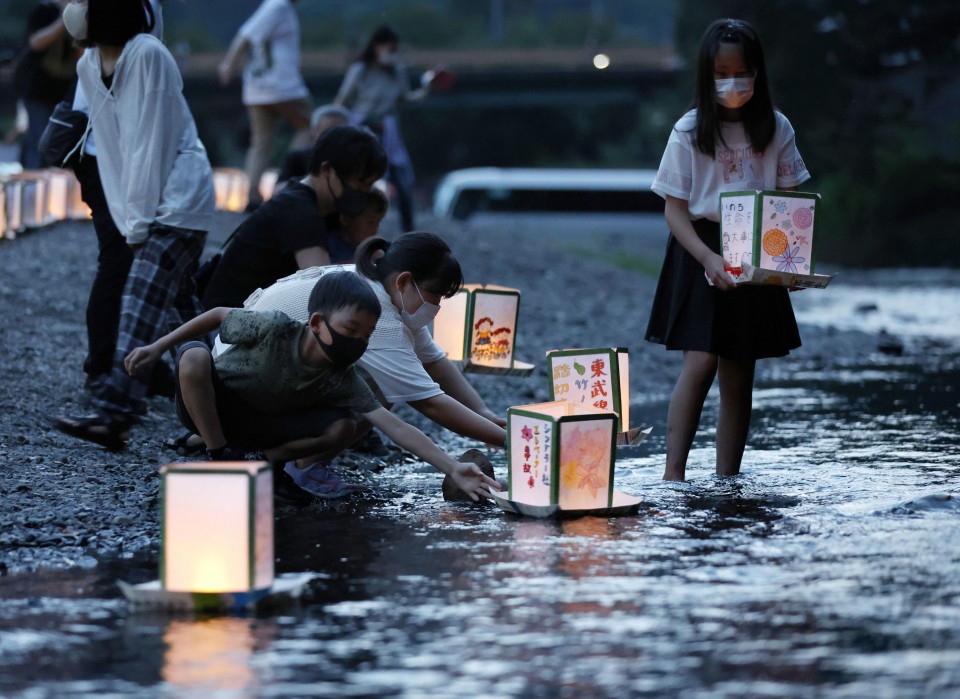 Paper lanterns float on the Kanna River in the village of Ueno in Gunma Prefecture, eastern Japan, on Aug. 11, 2022, the eve of the 37th anniversary of the 1985 Japan Airlines jumbo jet crash that killed 520 passengers and crew. (Kyodo) ==Kyodo

TOKYO - Around 42 percent of major companies in Japan expect the country's economy to slow down over the next 12 months, up from just 5 percent one year ago, as they struggle to cope with surging commodity costs and the yen's weakness, a Kyodo News survey showed Thursday.

The survey of 114 companies, including Toyota Motor Corp. and SoftBank Group Corp., found that Japanese blue chips are becoming increasingly pessimistic about the country's economic outlook, up from 12 percent at the beginning of the year.

UENO, Japan - The families of victims of the 1985 Japan Airlines plane crash on a mountain north of Tokyo that claimed 520 lives offered prayers on Friday, though the number climbing the steep trail to pay their respects at the site is on the decline as the relatives age.

Kishida said price hikes, particularly for energy and food items, are having a "huge impact" on companies and consumers, telling a government meeting that he will instruct officials on Monday to implement relief steps "seamlessly."

YANGON - A Japanese ruling lawmaker has met with Myanmar's junta leader, a state-run newspaper reported Friday, days after a Japanese documentary filmmaker was charged in connection with an anti-coup protest in Yangon.

It was apparently the first meeting between a Japanese lawmaker and Myanmar junta chief Senior Gen. Min Aung Hlaing since film producer Toru Kubota was detained with sedition and violating immigration law, prompting Tokyo to call for his early release.

The decision was made to help the country overcome its "economic crisis," the Justice Ministry said. The pardon allows for the "reinstatement" of the Samsung Electronics vice chairman's rights. He is the most high-profile figure among 1,693 people on the pardon list.

TOKYO - An estimated 369.65 million disposable cups were used to serve drinks by nine major coffee chains in Japan in 2020 alone, highlighting limited progress in promoting reusable cups and cutting waste, according to a recent survey by an environmental conservation group.

Greenpeace Japan said the annual waste translates into 1 million single-use plastic and paper cups a day, which, if stacked on top of each other, are "equivalent to the height of more than 10,000 Mt. Fujis," reaching an altitude of over 37,000 kilometers.

SEOUL - A nongovernmental group affiliated with the Unification Church on Friday commemorated the late former Japanese Prime Minister Shinzo Abe during an international conference, at which a video message from former U.S. President Donald Trump was also played.

At the event organized by the Universal Peace Federation in Seoul, a picture of Abe was shown on a screen with his quote, "Peace is not given by someone. It should be won." Participants laid flowers to show their respect to the former Japanese premier.