Japanese Foreign Minister Yoshimasa Hayashi said Friday he will work "tenaciously" to build a broader global consensus to oppose attempts to change the status quo by force in the wake of Russia's war in Ukraine, warning that the "logic of brute force" is gaining traction in the Indo-Pacific.

"Russia's aggression needs to go down in history as a clear failure, otherwise it is inevitable that other countries will follow Russia and attempt to change the status quo by force," Hayashi said at a think tank event during his first visit to the U.S. capital since assuming the foreign minister's portfolio in November.

Hayashi met with his U.S. counterpart Antony Blinken the same day and reaffirmed the importance of peace and stability in connection with Taiwan, a self-ruled island that Beijing views as a renegade province awaiting reunification with the mainland, by force if necessary. 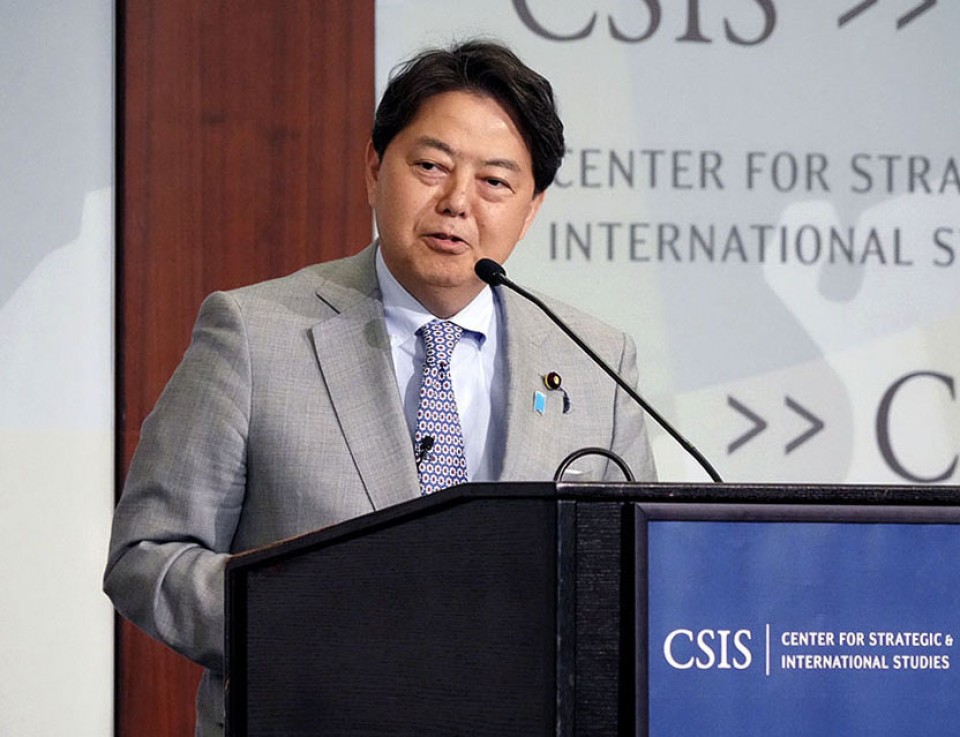 The two also agreed to work further with allies and partners to block bids to change the status quo by force in the Indo-Pacific, Hayashi told reporters after the meeting.

During the event at the Center for Strategic and International Studies, Hayashi said the world appears to be divided into two camps -- the Group of Seven nations, including Japan and the United States, as well as like-minded countries on one side, and Russia and others that take a similar position on the other.

But he added there are many countries "in between," citing the 35 countries that abstained in March from voting on a U.N. General Assembly resolution deploring Russia's onslaught against Ukraine that started a month earlier. India, which has long-standing military ties with Russia, was one of the countries.

"We must never accept unilateral attempts to change the status quo by force, no matter where in the world. We must work to make the international circle of this consensus larger and more resilient," he said.

"Therefore, we will continue to tenaciously reach out to those middle-ground countries while also being mindful of their individual situations," he said.

In the Indo-Pacific, he said the "logic of brute force is gaining more traction over the rule of law, and the strategic balance in the region is becoming increasingly challenging" for Japan and the United States.

He cited concern about ongoing unilateral attempts to change the status quo by force or coercion in the East and South China seas, where Beijing has been stepping up territorial claims including over the Japanese-controlled Senkaku Islands.

Touching on China's nuclear buildup and North Korea's nuclear ambitions, Hayashi also called for a strengthening of the "credibility" of the U.S. "extended deterrence" commitment to Japan that includes nuclear and conventional defense capabilities.

Nuclear deterrence has drawn renewed focus in the wake of Russia's nuclear saber-rattling amid the invasion of Ukraine.

Hayashi said he agreed with Blinken during their bilateral talks to continue close communication to ensure such credibility.