The Group of 20 foreign ministers' meeting through Friday ended up only laying bare the rifts over Russia's invasion of Ukraine, with experts underscoring the need for the creation of a more effective framework to address global challenges.

At the two-day gathering held on the Indonesian island of Bali, the United States and other Group of Seven countries traded barbs with Russia over the war in Ukraine that has led to global food and energy prices. The ministers wrapped up their talks without any specific outcomes.

"I wasn't expecting much to come of this meeting," said Hugo Dobson, a professor in the School of East Asian Studies at the University of Sheffield in England. "The G-20 is clearly crippled by its diverse membership."

Confrontation among the members came to the surface from the very start of the meeting, as the G-7 foreign ministers boycotted a dinner event in protest at Russia's participation. The following day, the customary group photo of the ministers before the start of substantive discussions was not taken. 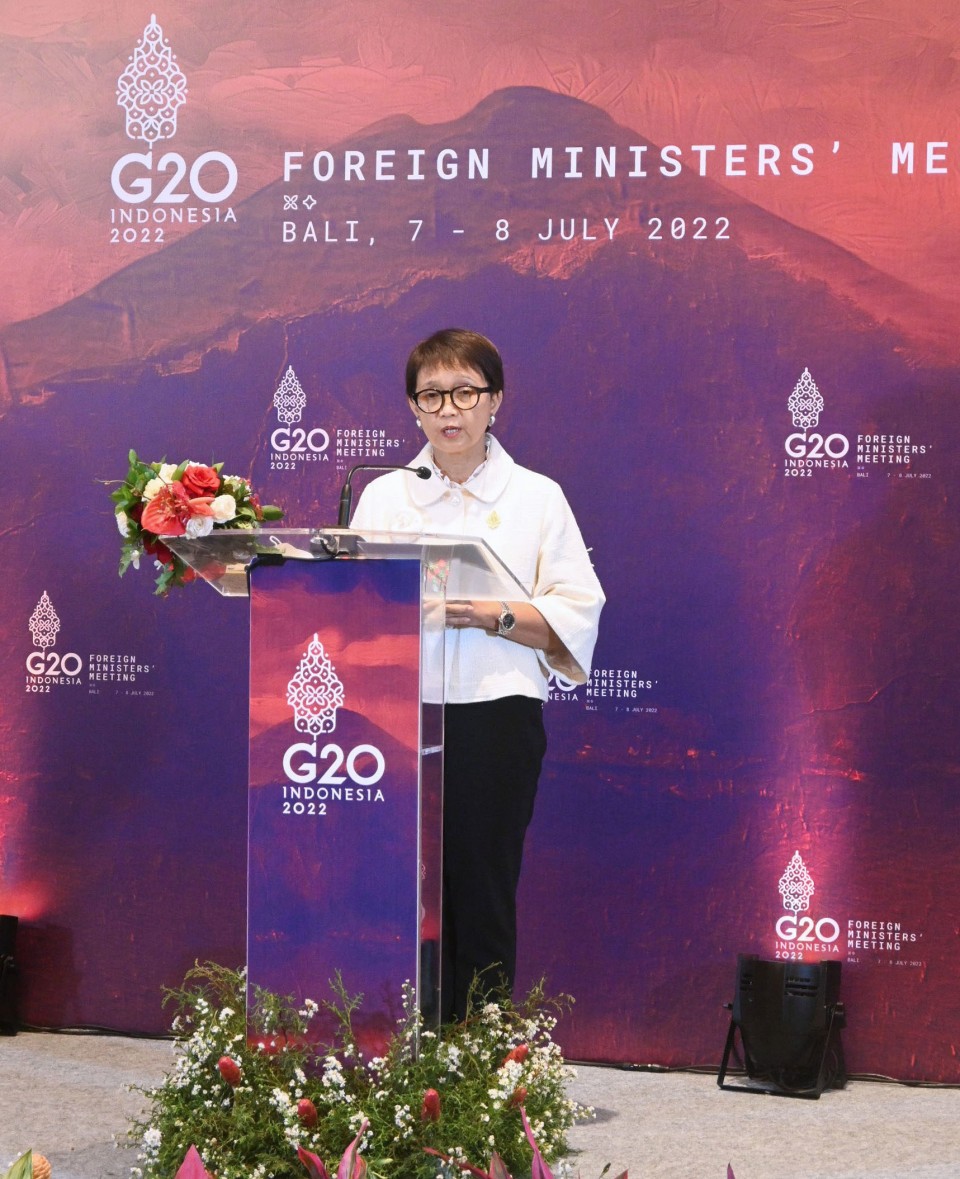 Indonesian Foreign Minister Retno Marsudi speaks at a press conference in Nusa Dua on the Indonesian island of Bali on July 8, 2022, after the closing of a foreign ministerial meeting of the Group of 20 major economies. (Kyodo) ==Kyodo

"G-20 must be a beacon of solution to many global challenges," Indonesian Foreign Minister Retno Marsudi said during a session on Friday. "Multilateralism is also the only way to coordinate effectively against the global challenges."

A Japanese government official said before the meeting that the G-7 nations would "rebut Russia's argument thoroughly after hearing it," instead of leaving their seats during the Russian speech, as they did recently.

However, it was Russian Foreign Minister Sergey Lavrov who walked out during a session on how to strengthen multilateralism, after saying there was no point in discussing Ukraine as long as Western nations continue to hope for a military victory.

"I think it's really interesting to see how in 2008, 2009 people were saying that the G-7, G-8 won't exist anymore" but "the opposite is happening," said Dobson. "I think the G-20 is actually in trouble, and the G-7 is continuing and it's actually got a stronger sense of purpose or a strong incentive for cohesive membership."

The G-7, comprising Britain, Canada, France, Germany, Italy, Japan and the United States plus the European Union, used to be the Group of Eight until Russia was expelled amid global outrage over its annexation of Crimea in Ukraine in 2014.

The G-20 was established in 1999 as a forum to discuss financial stability after the Asian currency crisis started in 1997. Its members began holding summits from 2008 amid the global financial crisis following the collapse of Lehman Brothers.

"Now that the financial crisis has passed, it's not really equipped to deal with security issues, as well as its finance issues," Dobson said.

Since the start of the invasion of Ukraine in late February, the G-7 has swiftly taken action, including imposing economic sanctions on Russia such as asset freezes and disconnecting it from a key international payments system.

Among G-20 members, meanwhile, China and India have not joined the U.S.-led sanctions against Russia.

Shigeaki Shiraishi, a senior research fellow at the Nakasone Peace Institute in Tokyo, said the G-20 members have not appeared in tune since it started holding leaders' meetings.

"The G-20 had discussed the governance of the global economy genuinely until it started holding summits in 2008. But since then, they have also discussed political and other issues, and it has become more difficult to build consensus," he said.

After the end of the Cold War in 1991, Western nations tried to integrate Russia into the global capitalist system, but the current situation demonstrates that such attempts have "ended in vain and failed to bring about peace," Shiraishi said.

Countries like Japan, which value freedom and democracy "should take this opportunity to gain wider international support and design a highly effective framework" to address global challenges, he said.

The G-20 is set to hold a summit in Bali in November, with Russian President Vladimir Putin likely to attend.

"The G-20 may still be meaningful given that the member nations regularly have opportunities to talk directly with figures like President Putin, but it will get tougher for them" to solve global challenges, Shiraishi said.