About 120 people gathered for a commemorative service in Kyoto on Monday to remember 36 artists and others killed in an arson attack on Japanese anime studio Kyoto Animation Co. three years ago.

The attack on the company known for a long line of popular anime works, including "K-On!" and "The Melancholy of Haruhi Suzumiya," shocked many fans at home and abroad who affectionately call the studio "KyoAni."

The service was held on the site where the company's No. 1 Studio stood in Kyoto's Fushimi Ward with company President Hideaki Hatta among those present, while an 11-minute-long memorial video was streamed on YouTube for fans and others. 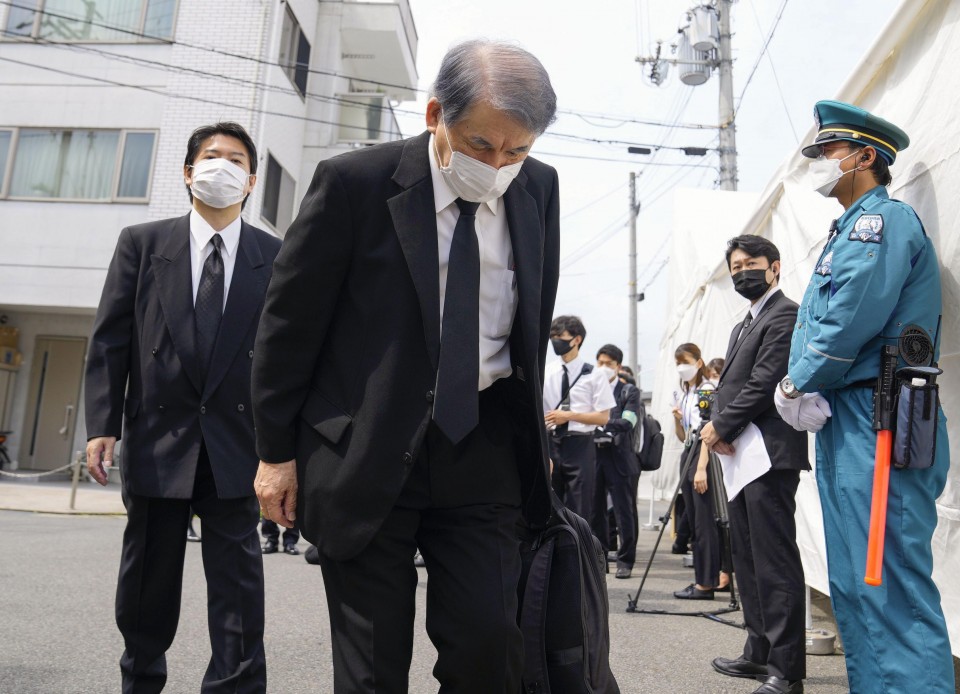 Kyoto Animation Co. President Hideaki Hatta bows on July 18, 2022, as he heads to the venue of a commemorative service for those killed in an arson attack in Kyoto, western Japan. (Kyodo)

"It's been three years...Time has stopped when it comes to you," an unnamed bereaved family member writes in a message in the video. "The thought of you catches me off guard and overwhelms me with emotions. And as tears well up, I'm thinking, 'I want to see you! I want to hug you!'"

When the attack occurred on the morning of July 18, 2019, 70 workers were inside the studio. Of those, 36 were killed and 32 others suffered various degrees of injuries. It remains the worst mass murder case the country has seen since at least 1989, according to the National Police Agency.

The victims included Yasuhiro Takemoto, 47, who served as director in a Haruhi Suzumiya film, Mikiko Watanabe, 35, who served as art director in "Violet Evergarden: The Movie," and Yuki Omura, 23, who had just joined the studio three months earlier.

"With grief in our hearts, we have been producing animations while supporting each other and have kept moving forward day by day since then," the company said in a statement earlier this month.

"We sincerely express our gratitude for your continued kindness and support," the statement said, urging fans to refrain from visiting the site in person out of consideration for residents in the area.

The suspected arsonist, Shinji Aoba, 44, is alleged to have poured gasoline and set fire to it on the premises of the studio. He suffered severe burns himself and underwent advanced treatment before he was arrested in May 2020.

Aoba was eventually indicted for a litany of charges such as murder and arson, but it took roughly half a year of psychiatric evaluation for prosecutors to conclude that he can be held criminally responsible for the attack. No date has been set for the start of his trial, however.