The assassination of former Prime Minister Shinzo Abe during a stump speech on Friday has highlighted the difficulty of preventing shooting incidents even in a country like Japan where gun control is strict compared with other nations such as the United States.

A number of shooting crimes have occurred in Japan within recent years, including those targeting politicians, and experts point out new technology such as 3-D printers that can produce homemade guns as a factor thwarting law enforcement efforts to crack down on all firearms. 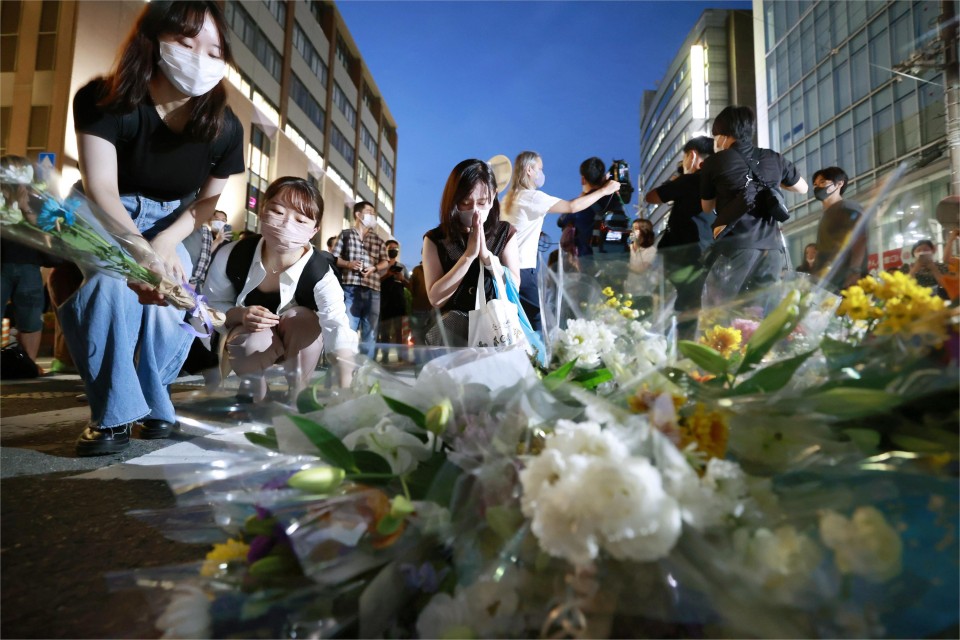 People pray on July 8, 2022, near the location of the fatal shooting of former Japanese Prime Minister Shinzo Abe, 67, by a gunman during a House of Councillors election stump speech in Nara, western Japan, earlier in the day. (Kyodo) ==Kyodo

Police departments in Japan use specialized sections to enforce the nation's strict gun control laws while soliciting information from citizens to help track down illegal guns as part of the overall effort against shooting crimes.

In 2007, then Nagasaki Mayor Itcho Ito was shot dead by a senior member of a yakuza crime syndicate during an election campaign.

Abe was also delivering a stump speech when he was shot by a 41-year-old man with a homemade gun in the western Japanese city of Nara. The former prime minister died hours later.

Gun violence has been seen in numerous feuds among Japanese yakuza groups.

Although it is difficult for unlicensed citizens to obtain firearms in Japan, progress in technology and the amount of information available online are believed to have played a role in the uptick of illegal weapons possessions.

In 2014, a former university staff member was arrested on suspicion of illegally possessing a gun made using a 3-D printer. In 2018, police in Aichi Prefecture arrested a teenage boy for allegedly manufacturing a handgun and explosive devices at his home.

"There is no countermeasure except law enforcement authorities keep a close tab on whether there are people misusing new technology," he said.