A group of 50 people, including civic group members, asked a Tokyo court on Thursday to issue an injunction ordering a stop to a state funeral for slain former Prime Minister Shinzo Abe.

The request to the Tokyo District Court, coming on the eve of a Cabinet decision to hold the rare funeral likely on Sept. 27, seeks to halt use of the national budget if the Cabinet goes ahead with the plan. 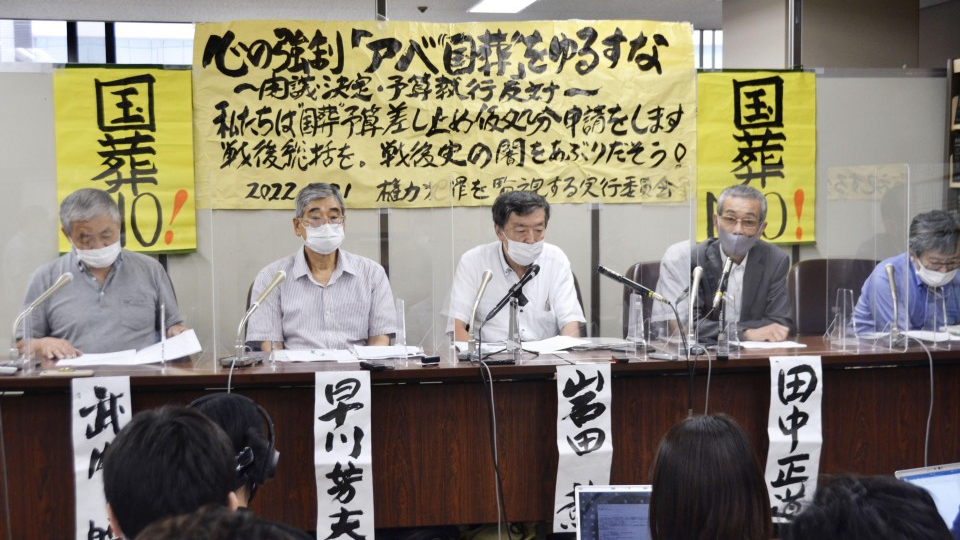 A civic group holds a press conference in Tokyo on July 21, 2022, after seeking a court injunction to stop a state funeral for slain former Prime Minister Shinzo Abe. (Kyodo)

It would only be the second state funeral for a former prime minister in postwar Japan, and the opposition camp has expressed concerns that the funeral, to be fully funded by the government, could be used to cement the legacy of the divisive figure.

"There are voices within society and the opposition parties that are against holding a state funeral," Masamichi Tanaka, head of the civic group's secretariat, said during a press conference in Tokyo. "It should be discussed in parliament."

The civic group, which aims to monitor abuse of power by authorities, also plans to file a lawsuit against the use of taxpayer money for the planned funeral.

In filing for the injunction, the motion said there is no legal basis for holding a state funeral, and that it would be illegal to execute the spending solely based on a Cabinet decision.

The motion also contended that holding a state funeral for Abe would violate Article 19 of the Constitution, which guarantees freedom of thought, as multiple scandals linked to the former Japanese leader have divided the public.

Speaking at a press conference on Thursday, Chief Cabinet Secretary Hirokazu Matsuno declined to comment on the court motion, but said, "A state funeral is held as a ceremony and does not force a particular political view upon each Japanese or require them to mourn."

Abe was shot dead by a lone gunman during a stump speech in the western city of Nara on July 8, two days before a House of Councillors election. The assassination shocked a country known for its strict gun control and relatively few instances of political violence.