A Japanese health ministry panel on Wednesday postponed a decision to approve the use of the oral COVID-19 drug "Xocova" developed by Shionogi & Co., the second time for the decision to be delayed following a meeting last month.

The deferral by members of the Health, Labor and Welfare Ministry panel and their decision to continue discussions came amid concerns the Japanese pharmaceutical firm was unable to demonstrate the drug's efficacy in its clinical trials. 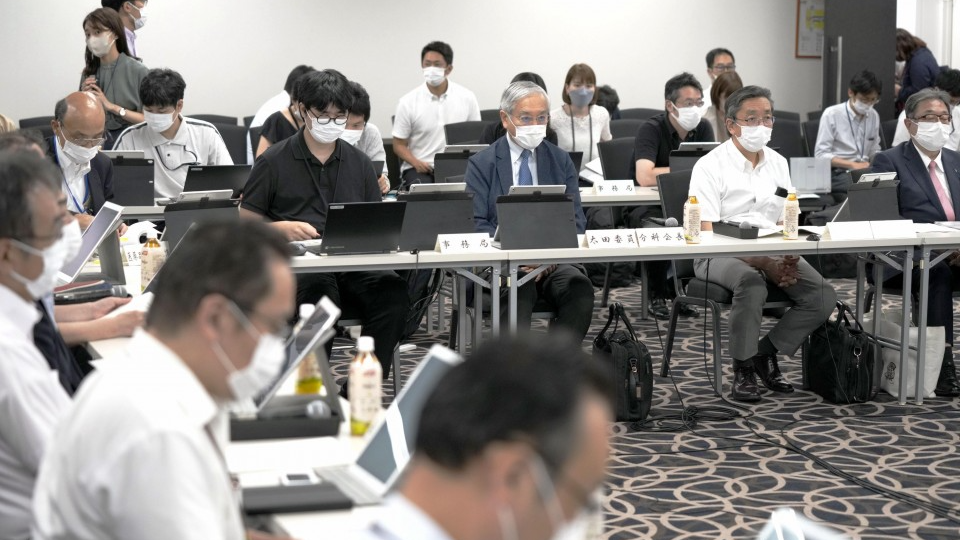 A Japanese health ministry panel discusses whether to approve the use of Shionogi & Co.'s oral COVID-19 drug in Tokyo on July 20, 2022.(Kyodo)

The Pharmaceuticals and Medical Devices Agency had said it cannot be determined that the pill can be presumed effective, noting it was "at the present, unable to determine whether it can be used as an option for treatment," according to documents submitted to the panel.

Although mid-phase clinical trials showed efficacy in reducing coronavirus in the body, there were no substantial differences in alleviating a total of 12 symptoms such as headaches and nausea between those given the drug versus the placebo.

Some panel members also noted that the drug was difficult to utilize due to its incompatibility with myriad other medicines, while it cannot be administered to pregnant woman due to instances of possible fetal abnormalities in animal testing.

The postponement over a decision on whether to grant emergency approval to the drug came amid a recent resurgence in COVID-19 cases across the country, which logged a record 150,000 daily cases Wednesday.

"A large amount of the drug could be used during this current wave, as people who have not been vaccinated are more likely to suffer from severe symptoms and it can also reduce hospitalizations," said Tetsuya Matsumoto, a professor of infectious diseases at the International University of Health and Welfare.

Shionogi had filed for the drug's conditional early approval with the health ministry in February.

The Japanese government has agreed to purchase doses sufficient for one million people if use of the drug is greenlit.

Japan has already approved the use of two oral coronavirus drugs, each developed by U.S. pharmaceutical firms Pfizer Inc. and Merck & Co.

However, the drugs combined have been prescribed to a total of 230,000, or less than 3 percent of the eight million people who have been diagnosed with COVID-19 this year, due to issues such as the pill's large size or incompatibility with other medicines including that for high blood pressure.